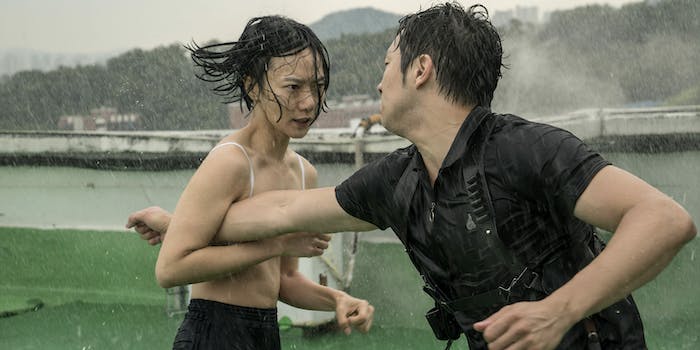 'Sense8' returns for a gripping second season, improving on the slow pace of earlier episodes.

Sense8 took a long time to find its feet in season 1, falling victim to Netflix‘s plague of slow-moving storytelling. Season 2, which debuts Friday, is a lot more lively, with tighter pacing and some intriguing forays into the show’s mythology.

Created by the Wachowskis and J. Michael Straczynski (Babylon 5), Sense8 follows eight strangers who share a psychic link. These “sensates” can step into each other’s lives, sharing skills and memories with people they’d never otherwise meet. It’s an effective allegory for the relationships we form online, coupled with a rather heavy-handed message about interconnectedness and empathy. Sensates defy borders and social divides, and as such, they’re a threat to authoritarianism and bigotry.

Season 1 focused on introducing the main cast, including a closeted Mexican movie star, a Chicago cop, and a Korean businesswoman jailed for crimes she didn’t commit. The finale was where things really kicked off, as the sensates pooled their resources to save Icelandic DJ Riley Blue (Tuppence Middleton) from a sinister villain known as Whispers (Terrence Mann).

Whispers captures and experiments on sensates, and season 2 expands on this conflict with an X-Men-style backstory. Apparently there are more sensate “clusters” living in secret around the world, using their combined powers to hide from Whispers and his agents. This creates a more coherent plot than season 1’s journey of self-discovery, as the eight lead characters investigate their sensate heritage and fight back against Whispers.

Now that the lead characters actually know each other, we can really dig into their individual roles. Kenyan bus driver Capheus (Toby Onwumere) gets much better material than last season, while Sun, Lito, and Nomi are great examples of Sense8 embracing different genres for each character. (This wasn’t always a successful idea, because several characters were rooted in national stereotypes, undercutting the show’s ambitiously diverse cast.)

For Wachowski fans, season 2 is where Sense8 really comes into its own. It tones down the characteristic Wachowski flaws (dubious racial stereotypes; meandering storytelling) but keeps its sense of unironic enthusiasm. Nomi (Jamie Clayton) and Amanita (Freema Agyeman) are basically living a fantasy life, but it’s a fantasy you won’t see anywhere else on TV: a badass transgender hacktivist and her girlfriend, who are passionately in love, effortlessly stylish, and kick The Man’s ass with help from a squad of likeminded friends. If you’ve seen The Matrix or Jupiter Ascending, you’ll know the Wachowskis have a cheerfully blasé attitude toward self-indulgent protagonists. There’s even an extended V for Vendetta tribute in there; something no one else could get away with.

Meanwhile, Lito’s role mirrors his career in cheesy but popular movies: funny and melodramatic, yet heartfelt and intense. He’s facing realistic backlash after being outed by the press, but the show makes sure to highlight the positive impact of his work as an actor. Art doesn’t need to be highbrow to change lives; a theme close to all the showrunners’ hearts, I suspect. As for Sun Bak (Bae Doona), she gets the most distinctive genre story of the season: a disgraced business tycoon/martial arts badass with an obsessive drive toward justice. She’s a one-woman action franchise and arguably a superhero origin story in the making.

As a sci-fi thriller blended with a series of unique personal dramas, Sense8 has grown into the show we were promised in 2015. It’s not flawless, and its love of atmospheric montages will not be to everyone’s taste. But if you were even slightly taken in by season 1, the new season is well worth the wait.