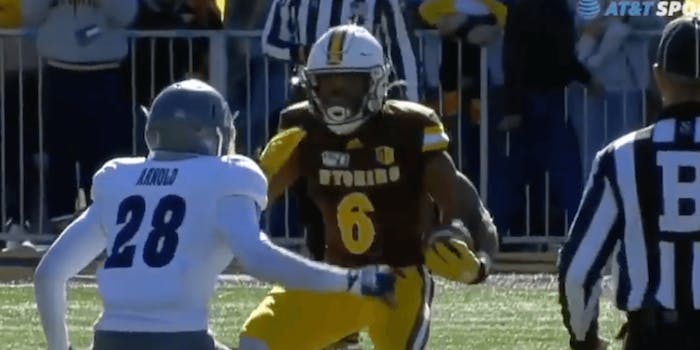 The Wyoming Cowboys (7-5) represent the Mountain West Conference and will take on the Sun Belt Conference delegate Georgia State Panthers (7-5) at Arizona Stadium in Tucson, Arizona, in the Nova Home Loans Arizona Bowl.

Georgia State is paced by running back Tre Barnett, who’s run for a school-best 1,389 rushing yards (11th in FBS) and 12 touchdowns. The Panthers’ problems, however, are in defending the run, giving up 211 yards a game—116th of 130 FBS teams.

Wyoming called runs on roughly two-thirds of the possession time—the seventh-highest rate in the nation. The Cowboys are 28th in the country, tallying 208.7 rushing yards per game, led by Xazavian Valladay’s 1,061 rushing yards. But they are the fifth-best team in stopping the run, allowing just 99.4 rush yards a contest.

The Panthers will need to create turnovers and play near perfectly on special teams to stay competitive.

Here’s how to watch Wyoming vs. Georgia State in the Nova Home Loans Arizona Bowl.

How to stream Wyoming vs. Georgia State live: Watch the Arizona Bowl

To further illustrate the awfulness of their defense—ranked 120th out of 130 FBS programs—Georgia State was gashed for 5.3 yards per rush attempt during the season and gave up 31 touchdowns on the ground. If the defense can’t find a way to keep the Pokes off the field after third down, it will be steamrolled by the end of the first half.