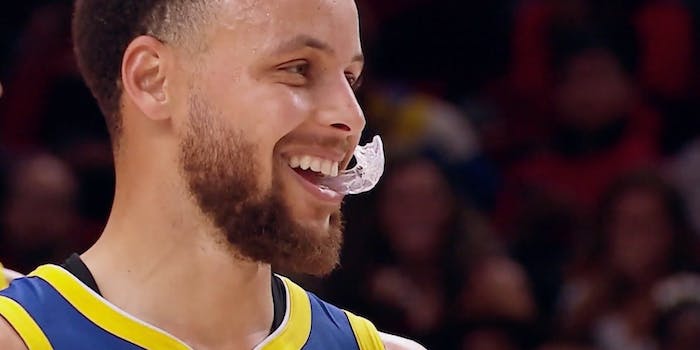 How to watch the 2019 NBA Finals online for free

Can the Warriors repeat, or will the Raptors pull off the upset of the decade?

There’s no shortage of ways to live stream the 2019 NBA Finals. In fact, YouTube TV is the presenting sponsor. And trust me: You won’t want to miss this series between the Golden State Warriors and Toronto Raptors.

The big question mark for the series if or when Kevin Durant returns (and to a much lesser extent, DeMarcus Cousins) for the Warriors. He’s already been ruled out for game 1 (Cousins is listed as questionable). The Warriors might have looked invincible against the Houston Rockets and Portland Trail Blazers in his absence—returning to the death-by-a-thousand-threes small ball that hinges on Steph Curry, Klay Thompson, and Draymond Green—but Durant is the ideal defender for Kawhi Leonard and remains one of the greatest offensive weapons in the world.

For the Raptors, the immediate challenge will be one of complacency. The team managed to climb out of early deficits to the Philadelphia 76ers and Milwaukee Bucks, but it can’t afford to cede its home-court advantage or settle for finally breaking through to the Finals. There’s no doubt that Leonard will continue to perform at MVP levels, but with mounting pressure, he’ll need everyone—Kyle Lowry, Marc Gasol, Pascal Siakam, Danny Green, and Serge Ibaka, and Fred VanVleet especially—to consistently contribute. And maybe even a few shoulder rubs from Drake.

Here’s everything you need to know to watch the 2019 NBA Finals online and the complete TV schedule.

2019 NBA Finals live stream: How to watch Warriors vs. Raptors for free

The 2019 NBA Finals will broadcast on ABC and simulcast on ESPN3. That means that even if the live TV streaming service you select isn’t able to offer a live feed of ABC—you’ll want to check availability for your area using the links below—so long as your package includes ESPN, you’ll be able to use your subscription credentials with the WatchESPN app to stream the game. Regardless of which package you choose, you’ll start with at least a one-week free trial.

Sling TV is one of the most affordable and flexible options for streaming live TV. You can choose between two basic plans, either of which costs $25 per month. Sling Orange offers three ESPN channels, Disney Channel, and Freeform, along with about 20 other channels. Sling Blue offers even more channels, including some local options, FS1, FX, and specialty sports channels like NFL Network. For $40 per month, you can combine the two packages in the aptly named Sling Orange + Blue. Sling TV lets you customize further with more than a dozen add-on packages for sports, comedy, and more. You’ll also be able to rent movies or subscribe to premium channels like Showtime and Starz. Sling TV doesn’t offer ABC, but it’s the only service that provides a standalone channel for ESPN3 (in the Sling Orange and Sling Blue + Orange packages), so you’ll be able to live stream the NBA Finals, no problem. (Here’s a complete guide to Sling TV channels and our Sling TV review.)

Don’t let the name fool you: PlayStation Vue is a great live TV streaming option, and you don’t have to own a gaming console to use it. PS Vue works with Roku, Amazon Fire, and even Kodi. (It’s also the only live TV service available on PS4.) PlayStation Vue offers four different channel packages, starting at $44.99 per month. No matter which one you choose, you’ll get great channels like ESPN and ESPN2, AMC, BBC America, TBS, Disney Channel, and plenty more. For bilingual families, Telemundo may be available as part of your local channels, and there’s an Español Pack for $4.99 per month that includes NBC Universo, CNN en Español, Fox Deportes, and more. (Here are all of the PlayStation Vue channels.) The great thing about PlayStation Vue is that you can stream on up to five devices at once, making it a great option for families, and you’ll get unlimited cloud DVR.

YouTube TV strikes a perfect balance between sports (MLB Network, NBA TV, a whole suite of ESPN channels), news (CNN, MSNBC, BBC World News), and entertainment (AMC, HGTV, TBS). There are a couple of drawbacks: You can’t add HBO or stream using Amazon Fire devices, and aside from Telemundo and NBC Universo, it’s lacking in Spanish channels. But you can create up to six accounts with each subscription, and each of those receives unlimited cloud DVR. That alone makes the service with considering. Considering YouTube TV is sponsoring the NBA Finals, you can expect a stellar experience. (You can find the full list of YouTube TV channels here.)

All times ET. As noted above, the games will also simulcast on ESPN3.