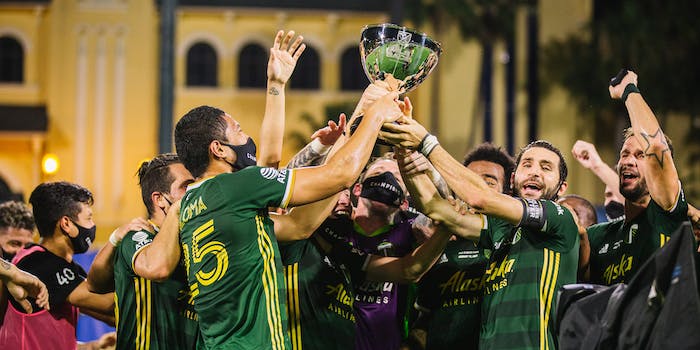 How to stream MLS Cup

It's MLS' 25th season, and the league's bigger and better than ever.

Stream MLS Cup 2020 on Saturday, Dec. 12 to see if the Seattle Sounders or Columbus Crew will reign supreme.

The Sounders advanced to MLS Cup Monday, beating Minnesota United 3-2 in thrilling fashion, getting three goals in the last 20 minutes. Columbus outlasted New England 1-0 on Sunday to advance from the Eastern Conference. In all, 18 teams competed in an expanded playoff format culminating with a match in the stadium where Portland won its sole MLS Cup five years ago.

How to Live Stream MLS during the regular season

ESPN+ is where to catch the most MLS action during the regular season. Saturday games in particular are mostly found on the streaming service.

As with all things 2020, this playoff bracket was not the original plan, but MLS is rolling with it. Normally, the top seven teams from each conference are in; this year, the MLS playoffs expanded to eight teams in the West and 10 teams in the East.

Here’s how to stream MLS playoffs in the East, day-by-day.

Here’s how to stream MLS playoffs in the West, day-by-day.

What is MLS (also known as Major League Soccer)?

MLS (not the MLS, lest soccer snobs look at you askance) is the top-flight soccer league in the United States. Although there’s a recently launched top-flight league in Canada, the three biggest Canadian cities (Toronto, Vancouver, and Montreal) all have MLS franchises as well. Started with 10 teams in 1996, MLS worked through initial growing pains, began expanding in the early to mid-2000s, and is approaching the 30-team mark.

Though it’s not on the level of world football giants like the Premier League, La Liga, the Bundesliga, or Serie A, it’s top 10 in the world by most metrics. It’s carving out a niche for younger players from South America and Central America to develop en route to top European leagues. As college football is to the NFL in player development, MLS is emerging as soccer’s answer to college football.

How to watch MLS matches online

ESPN+ streams most of the matches—especially Saturday matches—using local and regional feeds. MLS has a TV package that involves several broadcasters. FS1 and ESPN will typically carry at least one (and sometimes two) matches on Sunday, and Friday night and Saturday games are carried via TUDN or Univision (with an English-language stream via Twitter).

ESPN+ has partnerships with Major League Baseball, a number of soccer leagues around the world (including MLS, Bundesliga, USL, and Serie A), and UFC. It’s become increasingly essential for sports fans to add it to their streaming set-up.

FuboTV started as a streaming service geared toward sports fans. It’s since evolved into a broadly-appealing option with entertainment and news options alongside its robust sports choices. It starts at $54.99 a month, and depending on the package, you can access as many as 180+ FuboTV channels. If you’re looking to be entertained, Bravo, IFC, MTV, and VH1 are options even at Fubo’s most basic tier.

The Fubo channel list still includes plenty of sports, including the Fubo Sports Network, which has original programming mixing sports and humor. Fubo added the ESPN suite of channels in an agreement that also brought ABC and the Disney Channel. Pretty much every sports channel you could think of is available through Fubo, including BeIN Sports, CBS Sports Network, and TUDN. It’s got every channel you need to watch MLS; you’ll just need ESPN+ to round out your MLS streaming.

You can definitely stream MLS live with Hulu Live TV. Its sports coverage includes the full suite of ESPN channels (including ESPN2, ESPNews, ESPNU, and ESPN College Extra), FS1 and FS2), NBSCN, the Olympic Channel, and the Big Ten Network. Most markets have Fox included in its local channel set-up for the odd MLS match appearing there. Hulu Live TV’s also got you covered for news and entertainment in its nearly 70-channel package.

If you’re looking for a streamlined, cost-effective streaming package, check out Sling TV. It offers two basic cable packages, Sling Orange and Sling Blue, each of which costs $30 per month. There’s also the third option of getting Sling Orange + Blue for just $45 per month. You’ll get more Sling TV channels by choosing Sling Blue, with its 40 channels including sports favorites like FS1 and NBCSN and cable mainstays like Food Network and Discovery Channel. But Sling Orange brings must-haves Disney Channel and ESPN as part of its package. There’s also a Sports Extra option for each Sling package, with MLB Network, NBA TV, and NHL Network part of each plan.

Sling Orange + Blue will get you ESPN and FS1 for sure, and may get you Fox depending on your market. (Though you can use AirTV to guarantee getting all your local channels with Sling.

At its most basic Plus tier, you can find MLS staples like ESPN, Fox, and FS1 . If you graduate to at least the Entertainment level, you can also get Univision to set yourself up for MLS matches carried there.

It’s a great option to stream MLS live (and, indeed, many other sports). It comes with ESPN, ESPN2, FS1, FS2, and NBCSN at the ready. Deeper sports cuts, like NBA TV, MLB Network, CBS Sports Network, and ESPNU are also part of the YouTube TV plan. While you’ll still need a solution for TUDN and Univision, plus ESPN Plus, YouTube TV covers you for a good amount.

Vidgo offers a package for under $40 a month that pulls together more than 60 English-language channels into its National English Package. It’s a great way to stream MLS live. The selection of Vidgo channels includes ABC, Fox, FS1, the ESPN family of channels (including ESPN Deportes), and NFL Network. It’s also one of the few streaming services that carries BeIN Sports. But it’s like Fubo in that, even though it started out for streaming sports, it carries a lot more now. There’s even a Social TV platform that allows you to chat with other Vidgo viewers about what you’re watching.

There’s also two Latino options featuring ESPN Deportes, Fox Deportes, and TyC sports at both levels. At the Plus level on the English side, you get NFL RedZone and all the Pac-12 Network regional options.

According to Odds Shark (as of Nov. 30), these are the odds for the remaining playoff teams to win the 2020 MLS Cup: