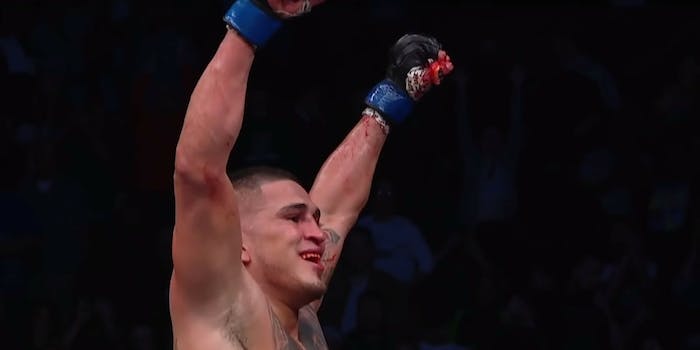 How to watch UFC on ESPN+ for free

All of the must-see UFC action is now in one easy-to-use app.

If you’re a UFC fan, you need ESPN+. It’s that simple.

In March, ESPN signed a seven-year deal to be the exclusive streaming provider of UFC pay-per-view events. That means if you want to watch UFC 237 without paying the obnoxious cover at your local sports bar, you’ll have to go through ESPN’s new streaming service.

The deal extends a five-year, $1.5 billion deal reached in January that made ESPN the official host of UFC Fight Nights. ESPN’s flagship channel will host 10 UFC Fight Night events per year, but twice as many will stream exclusively on ESPN+.

It’s great news for MMA fans. Not only is ESPN+ offering PPV events for $59.99 per card—that’s $5 less than you’re used to paying—new subscribers will also have the option of paying $79.99 for UFC 237 and getting a full year of ESPN+ for free (a $49.99 value). Perhaps more importantly, all of your must-see UFC action will now be centralized in the ESPN network: You’ll watch PPV events on ESPN+, while the preliminary card will be featured on ESPN (and other sometimes on ESPN2). If you download the ESPN app, you can watch it all from the same place.

Here’s how it works, plus everything you need to know to watch UFC on ESPN+.

How to watch UFC on ESPN+

Once you’ve signed up, you’ll need to download the ESPN app or visit the ESPN website and enter your subscription credentials. If you’re unsure how, just click on any of the content marked in the upper left-hand corner in gold with the “E+” logo. That’s all of the content available exclusively for ESPN+ subscribers. You’ll also find it grouped under the ESPN+ tab.

Just so we’re clear: ESPN+ is not a separate app. It functions as an extension of the ESPN app you probably already have downloaded on your phone. Now you just need to enter your new ESPN+ credentials and make sure you have it set up for your big screen.

The ESPN app works with pretty much every streaming device you can imagine—even Oculus Go, if you’re looking for a virtual reality experience. You can download the ESPN app for Amazon Fire devices, Apple TV, the entire Roku product line, gaming consoles Xbox One and PlayStation 4, Android TV, Chromecast, and iOS and Android devices. If you own a Samsung Smart TV, you can directly download the ESPN app onto it. It doesn’t get any easier than that.

Minimal requirements for ESPN on desktop

If you’re streaming from your desktop computer, you can access the ESPN site from any major browser, but the network recommends the following minimum requirements for an optimal experience.

In the simplest of terms, ESPN+ is a subscription-based streaming service that lets you watch all sorts of live sports action you won’t find anywhere else. Think of it as a way of super-sizing your ESPN viewing, allowing you to stream more exclusive UFC fights.

But ESPN+ offers a lot more than UFC cards, though. In addition to 20 UFC Fight Night events per year, you’ll also get 180 NHL games, at least one MLB game every day for the entire season, and thousands of college sporting events. No matter what sport you’re into, you’ll find plenty to watch on ESPN+: Top Rank Boxing, Grand Slam tennis events, and international soccer from Italian Serie A, EFL, and UEFA Nations Cup. It also offers the equivalent of NFL Sunday Ticket for Major League Soccer games, allowing you to watch every out-of-market MLS game for the entire season. That’s roughly 250 games.

Did I mention you’ll also be able to unlock the entire 30 for 30 catalog—all 150-plus entries and counting? That’s probably worth the monthly fee on its own.

It’s worth noting, however, that ESPN+ is not a substitute for ESPN. Your subscription won’t let you watch the prelims for UFC 237, for example, or the highlights later on SportsCenter. For that, you’ll still need a cable or live TV subscription. You can find complete guides to watching ESPN and ESPN2 without cable here, but both channels are available via Sling TV, PlayStation Vue, YouTube TV, DirecTV Now, and Hulu with Live TV.