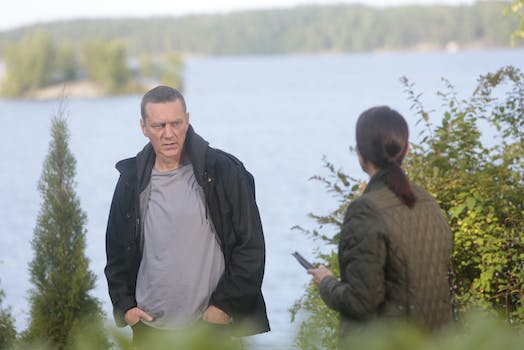 At a tight 11 episodes, it’s well worth taking a trip to scenic Finland and getting to know Kari Sorjonen.

Detective Kari Sorjonen (Ville Virtanen) has seen too much darkness—on multiple fronts. As an investigator for Finland’s National Bureau of Investigation, his job takes him inside the minds of the violent and depraved, and all too often he’s too late to save the innocents caught in the darkness’ path. In his personal life, he’s watched his wife battle brain cancer—a fight she won, but which has left Kari shaken. Deciding a change is needed, Sorjonen quits his job and moves his family back to Lappeenranta, the small town on the Russian border where his wife grew up. He hopes to find a quieter life, one where he can refocus his attention on his family.

Unfortunately, he soon learns that the darkness lurks even in the places that seem the most unlikely.

Bordertown was a big deal in its native Finland (where it was called simply Sorjonen). When it premiered last October, over a million people—a fifth of the Finnish population—watched the first episode. No surprise, then, that Netflix, ever hungry for more content, decided to add it to its impressive stable of international programming. It was a good call. Bordertown is a sleek, stylish crime drama that contrasts the macabre with the intimate.

While the subject matter is very much a staple of American procedural dramas, Bordertown is much more serialized than the CSIs or NCISs of the world. Part of this is because Sorjonen’s relationship with his wife and daughter is given just as much focus as the “crime of the week.” Also, even that descriptor doesn’t fit, since the show unfolds in multi-episode arcs that send Sorjonen off on the trail of sex traffickers, designer drug rings, and the like. And in each case, the crimes are rooted in the personal.

The sex trafficker arc doesn’t just follow the kidnapped victim, it follows her mother, locals involved in the conspiracy, and city government officials worried a scandal will torpedo their new casino. The drug storyline is more focused around the teens caught up in it than any larger criminal syndicates. It’s an approach that consistently reinforces the small-town setting, and that sense of intimacy and smaller scale helps set the show apart from countless similar programs we’ve seen before.

At the center of it all, of course, is Ville Virtanen as Sorjonen. He’s a crime-solving genius cut from a familiar cloth. Like Sherlock Holmes and many a character who has followed, he’s a troubled genius, often prickly and misunderstood, but gifted with an almost preternatural gift at seeing the clues everyone else misses. That sort of character is often isolated by nature, but Sorjonen’s family—and his continuing struggles to do right by them—make the character a lot more interesting than he otherwise could have been. Virtanen is wonderful in the role, bringing Sorjonen to life as a man devoted to his family, but constantly pulled away by the simple fact that he’s very, very good at something that he never wants to expose them to.

The rest of the show’s characters never fare quite as well as Sorjonen himself. They’re all capably played, but few are given anything approaching the depth of the protagonist. One standout, however, is Anu Sinisalo as Lena, mother of the girl kidnapped in the first episode, and herself a mysterious badass with connections to Russia. Throughout the first story arc, she’s always a step ahead of Sorjonen’s own investigation, determined to bring her daughter home safe. She’s a worthy foil for Sorjonen’s brilliant mind, and thankfully her presence is felt long beyond that initial storyline.

Bordertown is also visually sumptuous. There’s the usual crime drama grab bag of long shadows and arcing flashlight beams, sure. But they’re interspersed with gorgeous aerial shots of the Finnish landscape, full of forests, lakes, and long bridges. The show also has a penchant for dizzying bird’s-eye-view shots that somehow feel simultaneously sweeping and claustrophobic. It’s a visual motif the show returns to repeatedly, and it’s always striking.

Bordertown isn’t perfect. The mysteries aren’t particularly Byzantine, and the supporting characters often feel pressed from standard crime-fiction boilerplate. Still, it knows what it is and and does its job well, elevated by a strong leading performance by Virtanen. At a tight 11 episodes, it’s well worth taking a trip to scenic Lappeenranta and getting to know Kari Sorjonen.