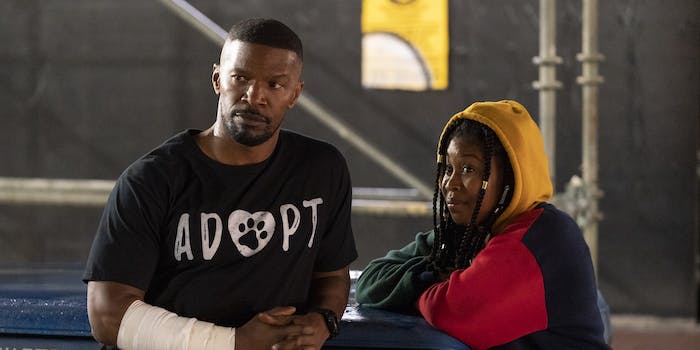 Jamie Foxx stars in this action thriller about a street drug that gives people superpowers.

When it comes to Netflix-branded action movies, we should all know the drill by now. A bankable star (in this case Jamie Foxx) and an easily-digestible premise (in this case a pill that gives you superpowers), executed with slightly disappointing shallowness. Project Power starts off hot but soon loses steam, struggling with the deeper meanings behind its superhero-adjacent concept. Its all-white creative team (writer Mattson Tomlin and directors Henry Joost and Ariel Schulman) also make some rather dubious choices for a thriller about cops and drug trafficking that hints at an allegory for the crack epidemic.

Dominique Fishback is the standout star here, playing teenage drug dealer and aspiring rapper Robin. Fishback, a 29-year-old actor/playwright/spoken word poet, is sympathetic and fully convincing as a character half her age, selling Power pills to support her diabetic mom. Her co-stars Jamie Foxx and Joseph Gordon-Levitt have more predictable action movie roles: Foxx as an army veteran searching for his missing daughter, and Gordon-Levitt as a cop. Fishback’s handful of rap scenes felt noticeably better-written than some other elements of the script, which makes sense when you learn that the lyrics were penned by the rapper Chika, who has a cameo in a classroom scene with Robin. Go figure.

In Project Power, the advent of superpowers does not lead to a flood of superheroes. Power pills are a street drug, used exclusively for crime and recreation. Until you take one, you have no idea what your power will be—but it’s always something dangerous, either to yourself or others. If you’re unlucky, your body will explode. Otherwise, you might end up with super-strength or the ability to burst into flames, lasting exactly five minutes before you go back to normal. Joseph Gordon-Levitt’s character Frank gets bulletproof skin, a useful skill for the kind of heroic dangers faced by American police detectives—according to Hollywood, anyway.

The underlying message is that Frank should be allowed to use this illegal performance-enhancing drug, but he’s unfairly held back by “guys in suits.” Never mind the reality that steroid abuse is rife in police departments, to an obviously negative effect. Here, we’re meant to support Frank as the main Good Cop of a partially-corrupt New Orleans PD, even though at one point he almost pummels a suspect to death.

Pushed to the brink while searching for his missing daughter, The Major (Foxx) carries the brunt of the action scenes, more brutal and morally ambiguous than you might expect. Desperate and traumatized, you can understand his cynical worldview. Sadly, the fight choreography is generally unremarkable, although Foxx is as magnetic as ever. Project Power packs enough of a punch that I wasn’t bored until the final act, but there’s a distinct lack of imagination behind how all those superpowers are actually used. It’s hard to suspend disbelief and accept that someone would, say, voluntarily sprout bone spikes out of their arms for hand-to-hand combat, instead of just using a knife or gun.

Silly worldbuilding is fine in a more action-focused film, but Project Power also offers commentary about race and class in America. The Power pill trade touches on Big Pharma, evil South American drug kingpins, government conspiracies, and the lack of resources offered to working-class Black kids, including a scene where Jamie Foxx tells Robin to stay in school or join the army instead of dealing drugs. Some of these ideas work but others are clumsy and ill-thought-out. Especially in the context of including a violent white cop as one of the heroes, popping pills so he can more efficiently shoot the “bad” drug dealers. Project Power has some fun moments and Dominique Fishback is excellent, but the underlying ideas still feel half-baked, despite Netflix winning an intense bidding war for the original screenplay.