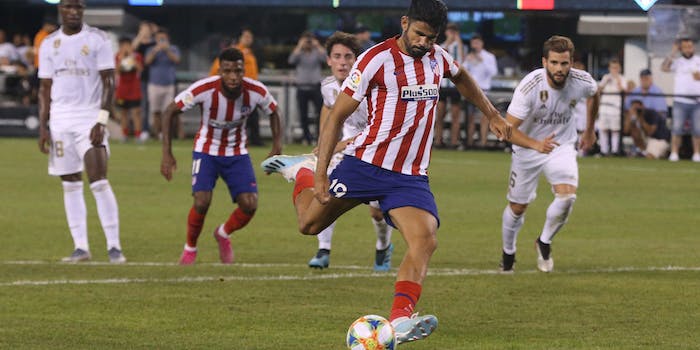 The modified UEFA Champions League tournament resumes on August 12th, with all four quarterfinals played as a one-game knockout in Lisbon. Barcelona and Bayern Munich are the only two remaining clubs to have won a European Cup, each with five to their name. Coincidentally, the two face off in the quarterfinal stage on August 14th.

Atlético Madrid has had two runs to the UCL Final this past decade, and it’s set up well to make it a third. After knocking out holders and Premier League winners Liverpool at Anfield, Atlético is on the same side of the bracket as the three other teams who also have never won this competition.

RB Leipzig is no easy opponent though, although the German side will be without superstar Timo Werner, who is already moving on to his next club: Chelsea.

The winner will face a PSG side with a history of premature Champions League exits—and it needed two late goals to vanquish Atalanta.

Here’s how to catch the Atlético Madrid vs. RB Leipzig live stream.

The 2020 UEFA Champions League is streaming live on CBS All Access.

Atlético Madrid is riding high after its elimination of Liverpool in the Round of 16. Not much has changed with the squad since February, apart from Álvaro Morata’s move from Chelsea being made permanent. The remaining teams in the tournament make this season as good a chance as any for Diego Simeone to bring a UCL trophy back to the Wanda Metropolitano. Goalkeeper Jan Oblak is one of the best in the world, and Brazilian-turned-Spanish striker Diego Costa is mercurial and a blast to watch (unless your team’s playing against him).

RB Leipzig has arrived at the place the club dreamed of being when it was founded in 2009, when the global Red Bull soccer network made its controversial move into German soccer. Leipzig has been a consistent top four finisher since arriving in the Bundesliga four seasons ago, and now finds itself in the quarterfinals alongside five other teams without a European Cup. Atlético Madrid may have the experience in this matchup, but Leipzig definitely has the talent to make a run to the final in this shortened Champions League format. If you need an American reason to root for Leipzig, USMNT star Tyler Adams is a key player for the squad.

According to BetMGM, as of August 12:

Here is how Atlético lined up in the La Liga finale against Real Sociedad:

Here is how Leipzig lined up in its last Bundesliga game, against Augsburg: