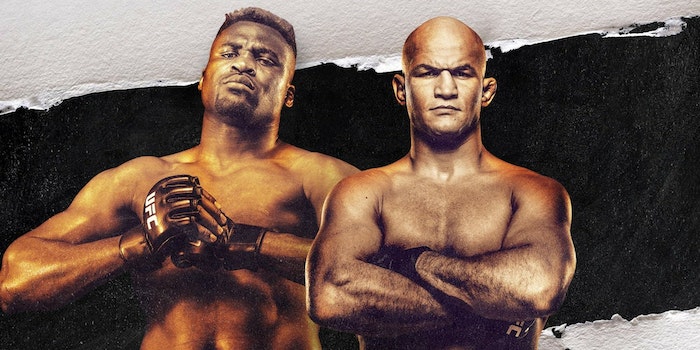 Longtime UFC heavyweight contender Junior dos Santos (21-5) rarely loses, but when he does, he goes down dramatically. The Brazilian’s two losses to Cain Velasquez, in 2012 and 2013, were bloody, one-sided maulings that together lasted nearly 50 minutes and probably took years off dos Santos’ career. And his second-round knockout loss to Alistair Overeem in 2015 came as the result of a winging left hook he really should have seen coming (and probably would have in his pre-Velasquez glory days). Francis Ngannou (13-3), meanwhile, seems to do his best work against fighters who beat up dos Santos. He was able to crumple the former heavyweight champion Velasquez in just 25 seconds. And in 2017 he very nearly took Overeem’s head off with an uppercut that seemed to come from off the cover of a comic book.

Luckily for Junior dos Santos, and contrary to popular belief, there’s no transitive law in fighting. Just because A beats B and B beats C, that doesn’t mean A will necessarily topple C. As former heavyweight boxing champion George Foreman said after knocking out Joe Frazier for a second time in 1976, “I could fight [Muhammad] Ali a hundred times, he would beat me a hundred times. I could fight Joe a hundred times, I would knock him out a hundred times. And yet Ali and Frazier could fight each other a hundred times and it would be life and death every single time.” Don’t be seduced by combat sports math, Foreman warns: Inside the ring, style is king.

And Junior dos Santos has the style to beat Ngannou—as long as he can keep his wits about him. Ngannou, who overcame crushing poverty in his native Cameroon and homelessness in his adopted Paris before striking it rich in the UFC, possesses otherworldly punching power that would give anyone pause, even an experienced heavyweight like dos Santos, but his striking technique and conditioning leave something to be desired. If he’s smart, the Brazilian will stay on the outside, avoiding Ngannou’s dangerous hooks and tormenting him with his long body jabs, overhand rights, and fencing-style footwork. But Ngannou has a way of scaring the intelligence out of even the best fighters. When he hits people, they forget themselves.

Here’s everything you need to know to live stream Ngannou vs. dos Santos.

UFC Fight Night Minneapolis is being broadcast by ESPN, which is available on most live TV streaming services. Here’s what you need to know about each one, including which ones offer free trials.

Sling TV is one of the most affordable and flexible options for streaming live TV. You can choose between two basic plans, either of which costs $25 per month. Sling Orange offers three ESPN channels, Disney Channel, and Freeform, along with about 20 other channels. Sling Blue offers even more channels, including some local options, FS1, FX, and specialty sports channels like NFL Network. For $40 per month, you can combine the two packages in the aptly named Sling Orange + Blue. Sling TV lets you customize further with more than a dozen add-on packages for sports, comedy, and more. You’ll also be able to rent movies or subscribe to premium channels like Showtime and Starz. (Here’s a complete guide to Sling TV channels and our Sling TV review.)

Don’t let the name fool you: PlayStation Vue is a great live TV streaming option, and you don’t have to own a gaming console to use it. PS Vue works with Roku, Amazon Fire, and even Kodi. (It’s also the only live TV service available on PS4.) PlayStation Vue offers four different channel packages, starting at $44.99 per month. No matter which one you choose, you’ll get great channels like ESPN and ESPN2, AMC, BBC America, TBS, Disney Channel, and plenty more. For bilingual families, Telemundo may be available as part of your local channels, and there’s an Español Pack for $4.99 per month that includes NBC Universo, CNN en Español, Fox Deportes, and more. (Here are all of the PlayStation Vue channels and our PlayStation Vue review.) The great thing about PlayStation Vue is that you can stream on up to five devices at once, making it a great option for families, and you’ll get unlimited cloud DVR.