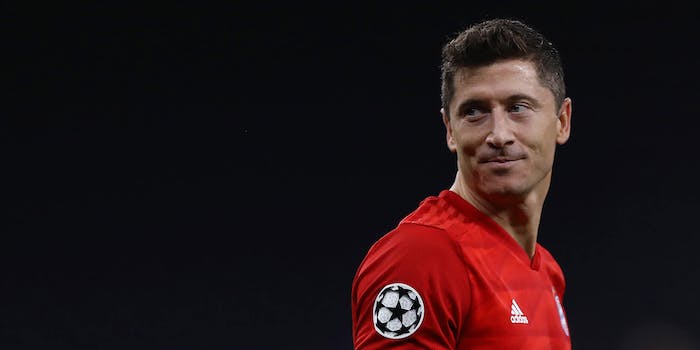 The Bayern Munich vs. Lyon matchup for Wednesday’s Champions League semifinals match was quite surprising. Bayern Munich demolished Barcelona 8-2 to get here, prompting Barca to change managers and starting rumors that Lionel Messi, the face of the franchise for the last decade-plus, wants to leave. Lyon upset over English powerhouse Manchester City, extending manager Pep Guardiola’s wait for a UCL title into a tenth season.

The winner will face French champions PSG in Sunday’s final. Here’s how to catch the Bayern Munich vs. Lyon live stream.

The 2020 UEFA Champions League is streaming live on CBS All Access and on streaming services carrying TUDN and Univision.

Here’s how to stream Bayern Munich vs. Lyon live.

Univision Now is a standalone streaming service for catching live and on-demand Univision and UniMas programming. You can stream anything on-demand that’s aired on either channel in the prior 72 hours. While TUDN isn’t technically part of the service, you can stream Bayern Munich vs. Lyon live through Univision Now since it broadcasts on Univision.

Bayern Munich is a heavy favorite to advance to the UCL Final after impeccable play throughout 2020. Bayern won the Bundesliga again while barely dropping a point this year, and showed its class against Chelsea in the round of 16 and Barcelona in the quarterfinals. Bayern and manager Hansi Flick were favored to win the entire competition before destroying Barca. The German champs’ odds only improved after Manchester City were eliminated.

Lyon has gone on a run for the ages, upsetting Italian champions Juventus, and a loaded Man City squad to get to the semis. The club’s showing fosters a new respect for the resolve and the talent existing in Ligue 1. If Memphis Depay, Moussa Dembele, and company can make it a third upset in a row, it would set up a showdown versus PSG; an all-French UCL Final for the first time in history.

According to BetMGM, as of August 19:

Here is how Bayern Munich lined up in the UCL Quarterfinal against Barcelona:

Here is how Lyon lined up in the UCL Quarterfinal against Manchester City: