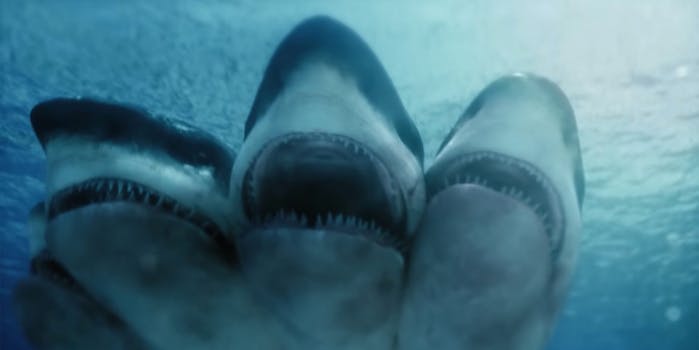 If you've already run out of so-bad-they're-good shark movies, we've got you covered.

Obviously, you love terrible shark movies. You’re a human being on the internet, some things are inevitable. But if you’ve already watched your way through our rundown from 2019, and don’t want to spend your precious free time sifting through the genuinely terrible to get to the so-bad-they’re good titles, don’t fear. We’ve compiled a brand new list for you.

1) Empire of the Sharks

A genuinely amazing film that this reviewer’s wife described as “like Star Wars but with shark whispering instead of the force,” Empire of the Sharks was probably the most fun of the shark films we binge-watched this year. Set in post-global warming Earth ruled over by a Mad Maxian villain with an army of cybernetically-controlled sharks, the world building on this is basically a mash-up of Waterworld, Star Wars, and Mad Max: Fury Road doused liberally in shark movie madness. Featuring a Magic Waif who doesn’t know her own powers, a woman who can only be described as Annie Oakley meets TFA Han Solo and a whole array of smuggler-with-a-heart-of -old types, some of whom maybe like explosives a little too much, the overall effect is highly entertaining. While I was a little sad that the everyman hero didn’t get eaten in the process (he had poor priorities and whined too much) the ending is actually moving as well as viscerally satisfying. If you watch nothing else off this list, you should definitely watch this one.

2-Headed Shark Attack made it onto our last list, and it’s been followed up with several sequels. Of those, 5-Headed Shark Attack is the best (in our very subjective opinion). Starting with our sharkly antagonist devouring a sexy boat side photoshoot and escalating to snatching a helicopter out of the air, 5-Headed Shark Attack is all ridiculous special effects and improbable shark violence. Particularly brilliant is the way the different heads regularly consume an entire line of humans at once, with each head biting off the top half of a person.

You will spend a chunk of this movie demanding “where’s the fifth head?” but I assure you, it will arrive. Whether it’s stuck onto the end of the tail like a weird cat-dog reference or some kind of hydra situation where two grow back if you cut one off, I will not say, but it’s a lot of fun to bet on which of the two it is while the movie is happening.

Bafflingly, Ghost Shark 2: Urban Jaws is not a sequel to the actual Ghost Shark movies, but to an imaginary Ghost Shark film which, despite getting a lot of flashbacks to, doesn’t really exist. The movie’s overall aesthetic is weird as hell, with classic slasher movie, indie vibes, and noir elements all mixed in there and it oscillates between seeming parody and apparently taking itself seriously.

In the reality where this movie takes place, the angry ghosts of sharks are haunting the land, out to get revenge on humans for overfishing them to supply fins for shark fin soup. These ghost sharks have a human level of intelligence and, for reasons never entirely explained, can be destroyed with explosive devices and EMP’s—though the more powerful the breed of shark (Great White’s at the top naturally) the bigger the explosion needs to be. With archetypes lifted from Jaws and Supernatural, much scenery chewing and some heartwarming parts Ghost Shark 2 is a great film to watch with a group of friends and some wine (maybe a lot of wine).

This movie is bizarrely cute. After finding a baby “sharktopus” in his nets, an older fisherman donates it to an aquarium, where the shifty owners’ marine biologist niece raises and trains it. Meanwhile, greedy scientists genetically engineer a Pteracuda—half Pterodactyl and half barracuda—for some reason. With the intention of radio-mind-controlling it as a weapon of war and making millions, they test it out only for it to escape and go on a rampage. The only thing that can stop it? A sharktopus! The premise for the film makes no sense if you look at it too hard, but if you wanted narrative coherence, you wouldn’t be reading this list, and you don’t need to watch the first Sharktopus movie to understand what’s going on, which is always a plus.

Warning! The little, and then not-so-little sharktopus clearly loves his human mom and spends part of the movie trying to get home to her. She will betray her science-abomination baby at the end of the film, and tears may be shed.

Probably the least entertaining of the films on this list, though still pretty good for all that, Ice Sharks features that classic trope setting of an isolated arctic research station and uses that isolation to ramp up the danger. What seems at first to be Greenland sharks (scary enough on their own) venturing out of their usual territory turn out to be a prehistoric mutation: sharks that can cut through the ice with their fins.

Also, they’re super smart and can jump ridiculous distances because why not? The film mixes together improbable gore with the kind of complicated survival problems you’d more usually get on a space station and has a suitably splashy ending. Pun intended, naturally.