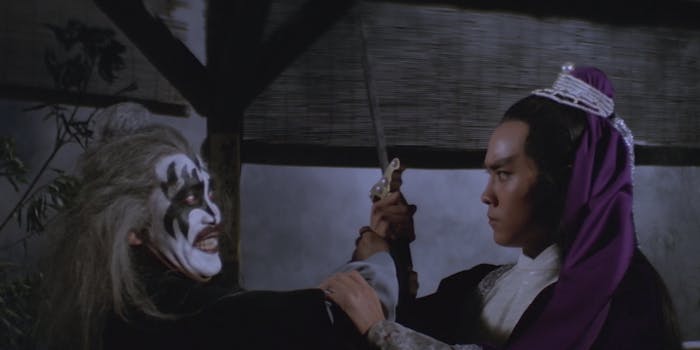 From traditional flying fists to hilarious genre riffs, this list has something for everyone.

As other streaming services increasingly focus on creating their own original content, Amazon Prime has been quietly building its back catalog. Buying the rights to massive old libraries, Prime Video has become home to a slew of classic movies. That’s a blessing for martial arts fans. No platform has a more extensive collection of fight films, from classic Shaw Brothers’ favorites to obscure ’90s oddities. We’ve culled the massive selection to present you with the best martial arts movies on Amazon Prime.

This gore-soaked Hong Kong flick might not be Jet Li’s most famous film, but by God, it’s one of his most entertaining. By day, Tsui Chik is an unassuming librarian, but by night, he fights crime under the mantle of Black Mask. Genetically enhanced as part of a secret government operation, Black Mask sets out to stop a brutal criminal organization. Ultra-violent and scored with a booming ’90s rap soundtrack, Black Mask is a crowd-pleasing treat and one of the most effortlessly fun martial arts movies on Amazon Prime.

Do you love Big Trouble in Little China? Now you can see one of the films that influenced it, Bastard Swordsman. Blending traditional martial arts with the wuxia genre, Bastard Swordsman developed a fierce following thanks to its beautiful fights. Yun is an orphan, stuck spending his life cleaning a martial arts school. When a deadly foe threatens his school, Yun must learn the mystical Silkworm Technique or face death. If you like a little magic in your kung fu, this is for you.

Also known as Chinese Super Ninjas, Five Elements Ninjas is easily one of the goriest fight films of the ’80s—and certainly one of the most gruesome martial arts movies on Amazon Prime. A feud between two martial arts schools turns into a horrific blood bath in this cult classic. The plot is mostly inconsequential, but the complicated fights based around the five elements of the earth make this a must see. Fighting trees? Oh yeah. Underwater ninja? You bet. Sunshine-harnessing golden warriors? Of course. Five Elements Ninjas is in a class of its own.

South Korea’s reputation for dark thrillers extends beyond suspense and into the world of martial arts. The Man from Nowhere is a drama first, telling the tale of Cha Tae-sik, a retired warrior looking for the kidnapped little girl who lives next door. Upon discovering who took her, Cha sets out to rescue the little girl, no matter how many bodies fall in his wake. Combat may be the last thing on this film’s mind, but the final knife fight is a ballet of violence.

Featuring “the Iron Triangle” of director Chang Cheh and actors David Chiang and Ti Lung, The Deadly Duo finds two warriors joining forces to rescue a prince. Along the way, they face a rope bridge, a heavily guarded fortress, and a never-ending stream of bright, red blood. The bright, large-scale outdoor battles rule the film, but there’s something here for every kind of fight fan. Be warned: This is one of the bloodiest martial arts movies on Amazon Prime.

If martial arts films tend to blur together for you, make time for The Bride with White Hair, a unique gem that’s frustratingly under-appreciated in the West. Shot with a beautiful pastel color palette and surreal lighting, The Bride with White Hair feels like a horror movie at times. Instead, it treats viewers to an epic scale tale of magic and swordplay. It’d be a shame to give away the plot, but trust us—you need to see this.

Impossible weapons are common in martial arts movies, but none are cooler than the flying guillotine. Essentially a box you throw over someone’s head to decapitate them, the death machine inspired a host of movies. Fatal Flying Guillotine, the prequel to 1976’s Master of the Flying Guillotine, might not reach the absurd heights of the rest of the series, but it’s still an important footnote in martial arts history. The story is confusing gibberish, but any movie with a flying box that cuts off heads is worth your time.

In this kung fu oddity, a book worm and his sword master sister face off against a trio of evil villains and a kung fu gorilla. Truly one of the strangest martial arts films ever made, The Battle Wizard is the sort of movie where a character with retractable metal legs isn’t the weird part. Stuffed with laser blasts and magical snakes, The Battle Wizard is one of the most fascinating martial arts movies on Amazon Prime, and a pallet cleanser from traditional genre fare.

Chang Cheh’s gift for over-the-top kung fu movies reached its zenith with the infinitely creative House of Traps. A group of thieves is tasked with stealing a valuable antique from the emperor. What begins as a simple assignment soon reveals itself to be a fight to the death in a compound filled with lethal traps. If you’ve ever dreamed of a Saw-themed martial arts movie, this is as close as you can get.

Evil never leaves well enough alone. The eponymous One-Armed Swordsman has retired, living a life of peace with his wife. But when the evil Eight Sword Kings begin to demand loyalty or the severed sword arms of all the warriors in the land, he must pick up his blade again. Each of the Eight Sword Kings has a unique weapon and fighting style, making for a host of unforgettable fights. From bombs to chained sickles, the never-ending variety makes for one of the most exhilarating martial arts movies on Amazon Prime.

One of the most fascinating aspects of martial arts cinema is the sheer number of genres it can incorporate. Take Human Lanterns, a wildly controversial blend of horror, black magic, and martial arts battles. Lo Lieh stars as an evil swordsman who makes lamps from the skin of his enemies’ loved ones. You get schlocky horror, bonkers monsters, and wire work that takes the fights to the skies. Part Mario Bava, part Shaw Brothers, Human Lanterns has to be seen to be believed.

You may be surprised to see Eastbound and Down creator Jody Hill score a movie on this list, but that’s because you haven’t seen Fist Foot Way. In many ways, this film, about a loser martial arts instructor, serves as a template for Eastbound and Vice Principals. The fights are an afterthought to the comedy, but Fist Foot Way is a refreshing break from all the traditional martial arts movies on Amazon Prime. Hiring actual taekwondo practitioners also adds an air of authenticity to this ludicrous comedy.

Kung fu got a great haunted house movie with the 1981 curiosity The Black Lizard. This slow-burning horror/martial arts film takes a bit to get going, but once it does, viewers get a lizard man, murder, spooky houses, and a kung fu battle against darkness. For once, the fights are the least important part of the movie, but director Chu Yuan still managed to use three separate fight choreographers. If you’re looking for a total change of pace from other martial arts movies on Amazon Prime—or from anything you’ve seen before, for that matter—try The Black Lizard.

This macabre kung fu serial killer mystery is a visual feast for the eyes, but also a genuinely evil movie. A sword-wielding serial killer known as the Bat Without Wings is haunting a small village, leaving a trail of violence in his wake. Then, at the height of his crimes, he disappears. Five years later the killings begin again, no longer merely targeting women but anyone walking the streets. Who is the killer, and what horrors await those who hunt him? It’s hard to rationalize how much the killer’s makeup looks like Gene Simmons from KISS, but the chilling atmosphere and clever fights make up for it. Due to sexual assault, however, this title comes with a strong trigger warning.