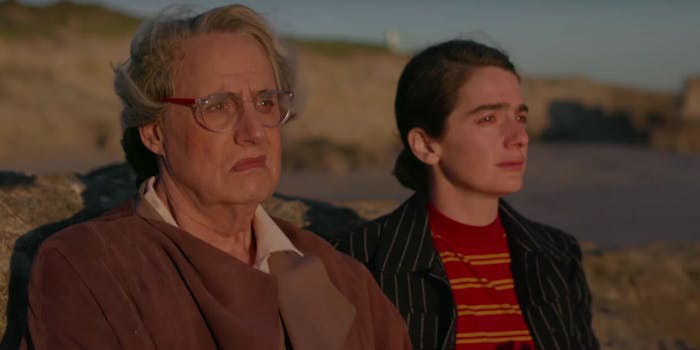 The best LGBTQ movies and series on Amazon Prime

Make the most of your Prime subscription.

There’s a lot of debate over what “LGBTQ cinema” actually is. It’s certainly not a genre in itself, at any rate. For the purposes of this list, we’re defining it as any movie or TV show with LGBTQ protagonists, and happily there are plenty of great options available. So without further ado, here are the best LGBT movies on Amazon Prime and the best LGBT shows on Amazon Prime.

Based on a true story, Pride is a delightful exploration of the formation of the Lesbians and Gays Support the Miners campaign in 1984 Britain. Centered around a group of struggling miners and the gay and lesbian activists who strove to assist them, Pride approaches the serious tones of the historical event it is based on with fun and frivolity.

While several of the movies on this list are based on true stories, We Were Here is the only documentary included. The 2011 film chronicles the rise of the HIV/AIDS crisis in San Francisco. Telling the story of an epidemic through the lens of five prominent community members, We Were Here examines a harrowing time in San Francisco’s history with grace and compassion.

Taron Egerton stars in this highly entertaining biopic of Elton John, delivering a string of iconic musical numbers while offering a surprisingly realistic look at the rock star’s struggle with substance abuse. Directed by Dexter Fletcher (who picked up the pieces after director Bryan Singer abandoned the critically reviled Freddie Mercury biopic Bohemian Rhapsody), Rocketman is a rare example of a mainstream biopic that embraces cliché while still being fun and charming to watch. – Gavia Baker-Whitelaw

End of the Century

This Argentinian indie drama came out in 2019, telling a love story between two men who hook up for casual sex, then realize they previously met 20 years ago when they were both still in the closet. Earning glowingly positive reviews, it’s a queer alternative to Before Sunrise. – Gavia Baker-Whitelaw

Amazon Prime claims some truly excellent queer content—like RuPaul’s Drag Race—but only with add-ons. Without renting, purchasing or subscribing to more than Prime, some of these options disappear. Luckily, you can still find plenty of great LGBTQ shows on Amazon Prime with a basic subscription.

This groundbreaking British TV series debuted in 1999, later inspiring the more famous US remake in the 2000s. Created by acclaimed screenwriter Russell T Davies (Doctor Who, Torchwood), it follows the lives of three gay men in Manchester. – Gavia Baker-Whitelaw

Many people compare this 2015 comedic series to Will & Grace. The comparison isn’t invalid—Gusbandry follows a quirky straight woman and her gay best friend—but it fails to communicate what makes this series great. The biggest downside to this modern take on life, friendship and the changing classifications of “gayness” is how few episodes we have to enjoy. The Benefits of Gusbandry only has 10 episodes across two seasons, all of which are available on Amazon Prime.

This Amazon dramedy about a dysfunctional Los Angeles family and its struggles with gender and sexuality is a landmark that’s sure to go down in the history of the medium as equal parts influential and important. The show stars Maura (Jeffrey Tambor), a trans woman who comes out to her family and must handle this process in real time alongside her children and ex-wife. Transparent took a dip in quality in its fourth season, and in the wake of sexual harassment allegations, Tambor was fired from the show. But even in its weaker moments, it’s still a messy, emotional, riveting rollercoaster. In its stronger ones, it’s a masterclass in generating empathy, and one of the most profound TV shows available. —Chris Osterndorf

This exceedingly gay show can be enjoyed in its entirety on Prime, so say goodbye to your next few weeks. The L Word follows a group of young lesbians and bisexuals traversing their complicated lives in West Hollywood. Intertwining character arcs and tones of love, loss, and the very human struggle of adulthood make this series a favorite for many, regardless of sexual orientation.

Inspired by the popular New York Times column chronicling real-life love stories, this romcom anthology series uses an all-star cast to explore various relationships in NYC. Episode 7 stars Andrew Scott (Fleabag) and Brandon Kyle Goodman as a gay couple who are planning to adopt a baby from a pregnant woman.