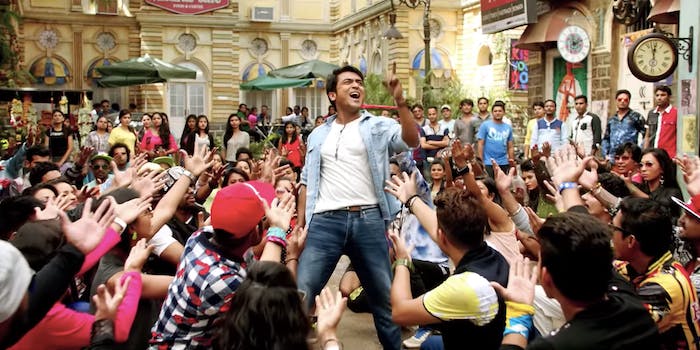 Here's your crash course in the globally successful film industry.

You should know a few things about Bollywood movies beforehand. They tend to be long, often running three hours. Bollywood films are stunningly beautiful, with an emphasis on vivid costumes, set designs, and choreography. They almost always feature music and dancing, even in action and horror movies. So without further ado, these are the best Bollywood movies on Amazon Prime.

Bollywood movies aren’t known for psychological thrills, but Darr is an odd, compelling exception. Kiran is a beautiful woman engaged to Sunil, excited to start a long, happy life together. There’s just one problem: Rahul, a stalker who’s obsessed with Kiran and willing to go to extreme lengths to get her. Mixing drama, suspense, and stunning musical numbers, Darr is one of the most thrilling Bollywood movies on Amazon Prime, offering a look at the industry’s past.

S3 is the third entry in the beloved Singham trilogy, but don’t worry: You needn’t have seen the others to enjoy this over-the-top action extravaganza. The film follows super-cop Durai Singham, who sets his sights on stopping an evil businessman who is dumping toxic waste. The fight scenes in particular must be seen to be believed. Part martial arts, part dance, these highly stylized explosions of violence will have you practically jumping out of your seat.

24 is the perfect movie for when you’re in the mood for a time travel-based action sci-fi rom-com. When a brilliant scientist creates a time-traveling wristwatch, his evil twin sets out to steal it, setting in motion an intergenerational race for the watch. Full-force action, comedy, and wild special effects come together to make something that defies genre. 24 also features some of the most intense dance choreography you’ll ever see onscreen. Do not miss this movie.

1920 is a profoundly unique film, a gothic horror Bollywood period piece that uses terror to explore Indian class dynamics. Arjun was born into a high-caste Hindu family, but incurs the wrath of his father when he falls in love with Lisa, a devout Catholic from a British and Indian family. When the lovers finally escape, they move into a beautiful old mansion, only for Lisa to experience dark forces hiding within its walls. Tight direction, gorgeous music, and brilliant frights anchor this gripping tale of love and demonic possession.

Sakthi has hated the police ever since they killed his father, a driver for the powerful gangster Sivan. His hatred runs so deep, Sakthi can’t even bear to see the color khaki (worn by cops in India). But then he’s forced to join the police as a double agent for Sivan’s crime family. Will Sakthi find honor and love behind the badge, or will his loyalty to gangsters who raised him win out? This action/musical has a little bit of something for everyone despite its dark themes.

One of the joys of Bollywood pictures is seeing genres you never expected get turned into musical extravaganzas. Take Yaman, a dark political revenge thriller that explores the ties between organized crime and institutionalized power. On its own, Yaman is a stylish thriller. But when coupled with the kinetic beat of its musical numbers, the film dances a fine line between surrealism and drama. Some viewers may find the shifts disorienting, but once you catch the rhythm, Yaman becomes one of the most irresistible Bollywood movies on Amazon Prime.

Finding a place to live is a nightmare that everyone must eventually face. That’s why Vishal and Swati jump at the opportunity to move into the high-rise apartment they find at a major discount. There’s just one catch: The previous tenant committed suicide after murdering her own son. Vishal tries to keep the secret from his wife, but when she begins to act strangely, he starts to question if the spirits of the previous owners are still hanging around. Full of genuine frights and creepy songs, Bhoot is a pitch-black spook-fest and one of the scariest Bollywood movies on Amazon Prime.

When talking about movies from other cultures, it’s crucial to not write off things you might not understand without consideration. That being said, 2.0 is truly bonkers, an explosive mix of action and comedy whose filmmakers commit fully to every idea, no matter how outrageous. When cell phones start flying out of people’s hands and join together into monsters that attack humanity, Dr. Vaseegaran and his robot Chitti unite to save the world. Sound wild? That’s just a hint of what 2.0 delivers.

Satyameva Jayate has a bewildering tone, alternating between brutally violent and whimsically beautiful. It opens with a cop being set on fire but also features one of the most elaborate belly dancing sequences ever committed to film. The plot is a fairly standard “cop and vigilante team up to take down evil” story, but stylish direction elevates the whole affair. Vapid yet thrilling, Satyameva Jayate is a vicious crowd pleaser.

If you have a hard time stomaching the occasional cheese of Bollywood movies, give Tumbbad a spin—as long as you aren’t scared of the dark. Bringing to mind horror favorites like Pan’s Labyrinth and The VVitch, this atmospheric nightmare is a far cry from the traditional Bollywood musical. Tumbbad is a period horror thriller that uses a traditional dramatic narrative to explore dark gods and the arrogant people who think they can control them. Giving away too much would ruin its secrets, but one viewing will make it abundantly clear why Tumbbad was a horror film festival favorite.

No Bollywood action movie comes close to the intense violence of Kesari, a gory recounting of the Battle of Saragarhi in 1897. During the battle, 21 Sikhs fought an invading army of over 10,000 Afghans in one of history’s most brutal last stands. The film’s historical accuracy is questionable, but its power and intensity can’t be ignored. Kesari is a staggering feat of technical filmmaking, leaving you holding your breath through each bash, slash, and bullet strike.

Before seeing Dhoom, I’d never realized how much The Fast and the Furious was missing by not being a musical. The film follows a cop who must join forces with a mechanic to stop a mysterious gang of robber bikers. The music is catchy, the dancing is as much fun as the fights, and the bike racing is exhilarating. There are two more Dhoom movies waiting for you if you fall in love with this one, both as silly and thrilling as the original.

Tiger Zinda Hai is the sequel to Ek Tha Tiger, which is also available on Amazon Prime. Why should you jump straight to the sequel? Because it’s not only better, but Amazon Prime is streaming it in stunning 4K UHD. After a group of Indian and Pakistani nurses is taken hostage, agents from both governments must team up to save them. If musicals leave you numb, fear not—this movie saves its music for the very end. Out of the best Bollywood movies on Amazon Prime, Tiger Zinda Hai makes a solid entry point for viewers who are new to Bollywood action.

It’s odd that the densest film on this list is also the shortest, but Maayavan is just an odd film overall. Combining a hard-boiled murder mystery with a sci-fi plot about storing the human mind in a hard drive, Maayavan requires your undivided attention. Viewers who dive in head-first will find a compelling blend of genres that makes for an unforgettable thriller with a genuinely shocking ending. If the music is your least favorite part of Bollywood movies, you’re in luck, because Maayavan only features three songs.