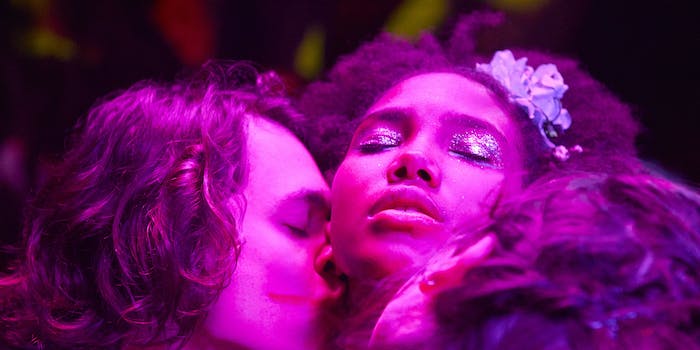 This sexy, stylish miniseries is about a mysterious disease transmitted by kissing.

Released alongside the underwhelming Cursed and Warrior Nun, Netflix’s Kissing Game flew under the radar with English-language audiences. Set in rural Brazil, it’s a smart, sexy, and stylish drama about a mysterious disease transmitted from mouth to mouth. The concept is abstract enough to work as an AIDS allegory, as an accidentally prescient story about Covid-19, and as a more general examination of small-town bigotry and generational divides.

Our main characters are high school students and their parents, all connected in some way to the town’s cattle industry. Fran (Iza Moreira) is a well-behaved girl with a crush on her friend Bel (Luana Nastas). Her mom works at the ranch, struggling with physical labor due to a chronic illness. Chico (Michel Joelsas) is a free-spirited rebel from the big city, sent to live with his conservative Christian father. He hooks up with a butch, taciturn cowboy (Thomas Aquino) who doesn’t realize Alex is still in high school. Alex (Caio Horowicz) is the third of our main leads, the socially awkward son of the town’s biggest ranch-owner.

Episode 1 begins with an outdoor rave, seducing a crowd of young adults with free drugs and sensual beats. Later we learn it was organized by a local cult—a detail that pays off later in this satisfyingly well-paced miniseries. The rave is a blessed taste of freedom for our main characters, but when Bel falls ill the next day, panic spreads across town. Did she overdose? Are other kids in danger? Soon another teenager is in hospital, and people begin to put the pieces together. The illness begins with hallucinations, then reveals itself with a black mark on the lips—and it’s passed on by saliva. A party full of horny teens on club drugs means there are countless possibilities for patient zero.

Kissing Game was conceived before the Covid-19 pandemic, but for obvious reasons, much of it feels familiar. When someone tries to create a track-and-trace program, it’s inevitably hampered by people refusing to admit who they’ve kissed. Authority figures are often guided more by personal bias or business interests than by any real desire for public safety. And because the disease only hits teenagers, there’s a predictable amount of adolescent rebellion, as parents fail to understand their own children, and those children fail to understand (or care about) the risks. This all plays out with a great deal of sympathy for all involved, offering more nuance than you usually see in American teen shows.

Openly fantastical, the kissing sickness is more fairytale than science fiction, and although this is a contemporary story, the reactions of the townspeople feel timeless. Over the course of six episodes, the disease exposes interconnected problems within the community: financial, sexual, familial, ecological. Overlooked due to its status as a foreign-language drama, Kissing Game is easily one of the best Netflix originals of the year.