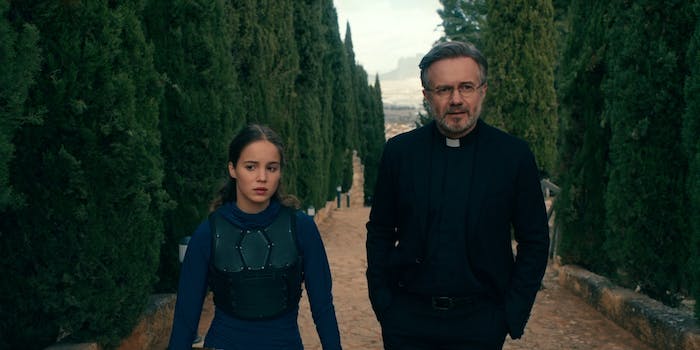 This action/fantasy drama is about a teen girl who unexpectedly gains demon-fighting superpowers.

“Into every generation, a slayer is born: one girl in all the world, a Chosen One.” And several times in each generation, we must endure another Buffy the Vampire Slayer copycat—generally with underwhelming results. The latest one is based on the long-running comic book series Warrior Nun Areala, about an order of demon-fighting Catholic nuns. Netflix’s Warrior Nun swaps the comic’s adult protagonist Sister Shannon for a teenager called Ava (Alba Baptista), a clueless outsider who accidentally gains the once-in-a-generation Warrior Nun superpowers.

RELEASE DATE: July 2, 2020
CREATOR: Simon Barry
STREAMING: Netflix
Echoing ‘Buffy the Vampire Slayer,’ ‘Warrior Nun’ is about a teen girl who gains demon-hunting superpowers. Unfortunately it’s not as fun as the silly title suggests, suffering from a lack of originality and imagination.

The Order of the Cruciform Sword trains dozens of young nuns in specialized martial arts, but only their leader gets to bear the “halo,” a supernatural artifact that imbues its owner with super-strength, enhanced paranormal senses, and in Ava’s case, the ability to levitate and walk through solid objects. Like Buffy Summers, she’s a reluctant hero who just wants to party and have fun, rejected by the more traditional members of the Order. Like Buffy Summers, she’s also mentored by an older man (Father Vincent, played by Tristan Ulloa) who teaches her about demonology from antique tomes. Unlike Buffy, her supporting cast have paper-thin characterization, and her one-liners rarely hit the spot.

Warrior Nun starts off strong but soon fizzles out. Episode 1 is an impressively accomplished pilot for this kind of show, kicking off with plenty of action, a clear introduction to Ava’s superpowers, and a handful of enticing mysteries. We first meet Ava as a corpse; an orphan who died under mysterious circumstances, and is unexpectedly resurrected by the Warrior Nun halo. Her life is transformed at once, and not just because she’s now a demon-killing superhero. Ava was paraplegic before her death, and the halo allows her to walk and live independently for the first time in years. (Following in the footsteps of The Witcher, this is the second time a Netflix fantasy show has magically cured a main character’s disability; a problematic trope that means the show neither stars a disabled actress, nor depicts the experiences of a disabled hero.)

Unaware of her destiny as a demon-slaying messiah, Ava runs away and joins a gang of sexy European drifters, locating the kind of mandatory Cute Boy and nightclub rave scene you always find in CW-style teen dramas. Meanwhile the Order of the Cruciform Sword are trying to figure out where the hell she’s gone, so they can a) get their hands on the halo again, and b) subject Ava to a predictable slew of exposition scenes and training montages.

Sometimes reluctant hero stories can work, but Warrior Nun is one of the many examples where the whole “reluctant” thing feels unnecessarily laborious, delaying the inevitable. Obviously, at some point, Ava must accept her duty and start kicking demon butt. They also spend far too long explaining the show’s very simple premise; time that would be better spent illustrating why we should care about demons in the first place. We get a few scenes of Ava being menaced by CGI monsters, but they’re neither scary nor narratively compelling, missing out on the disturbing demonic possessions of Supernatural or The Exorcist. Not that the paranormal stuff has to be the main focus, of course. But if the demons aren’t a priority, then the interpersonal conflicts need to be interesting, and in the episodes I watched (the first half of a 10-episode season), those elements were pretty basic as well.

Warrior Nun suffers from trying to execute a simple, rather silly concept with a serious tone. The premise is amusing enough to deserve a more tongue-in-cheek atmosphere like Riverdale or Netflix’s Sabrina reboot, embracing its own ridiculousness. A squad of gun-toting nuns who wear a sort of BDSM-infused body armor over their robes and headscarves? Love it! But for some reason, showrunner Simon Barry (Van Helsing) chose to focus more on teen angst, opting for a serious dramatic tone despite rather shaky worldbuilding and a paint-by-numbers origin story plot. Not to mention the shallow depiction of the Catholic Church, making vague Crusader references and chasing holy McGuffins without showing much imagination about the spiritual side.

While Alba Baptista gives a sympathetic performance as Ava, Warrior Nun is ultimately too shallow—and hampered by an annoying first-person YA protagonist voiceover—to stand out among other supernatural teen dramas. This is one you can probably watch in the background while folding laundry, but it’s unlikely to grab your interest longterm.