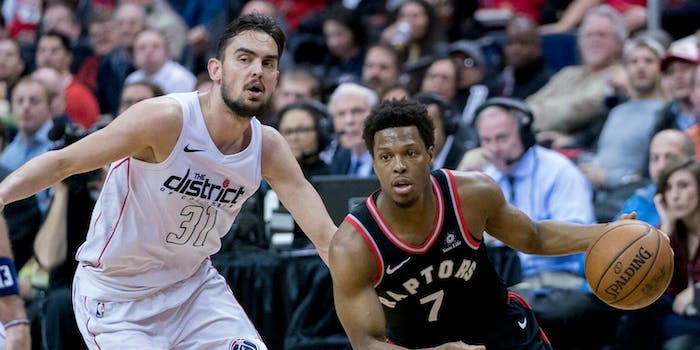 How to stream the 2019 NBA playoffs for free

You won't want to miss a game.

The stakes could not be higher for the 2019 NBA playoffs. The Golden State Warriors want to establish themselves as a legitimate dynasty; the Houston Rockets are peaking at the right time and with a healthy Chris Paul in tow; and the Denver Nuggets, Portland Trail Blazers, Utah Jazz, and Oklahoma City Thunder all want to prove they can compete at the highest level. In the Eastern Conference, LeBron James’ move to L.A. has left the field wide open: The Milwaukee Bucks, Philadelphia 76ers, Toronto Raptors, and Boston Celtics all seem determined to make it to this year’s NBA Finals.

But there’s more than just a championship on the line. With free agency looming, the 2019 NBA playoffs will likely determine whether stars like Kawhi Leonard, Kevin Durant, Jimmy Butler, Kyrie Irving, and Klay Thompson will resign or look elsewhere—moves that will have a huge ripple effect across the league.

Suffice to say, you won’t want to miss a game, and with the right live TV service, you don’t have to. Here’s everything you need to know to live stream the 2019 NBA playoffs.

2019 NBA playoffs live stream: How to watch every game for free

The 2019 NBA playoffs will broadcast on ESPN, ABC, TNT, and NBA TV. We’ve outlined everything you need to know to live stream all the action, including the complete TV schedule. No matter which service you choose, you’ll start with a one-week trial, allowing you to watch the NBA playoffs online for free.

Sling TV is your cheapest (and arguably best) option for streaming the 2019 NBA playoffs. Sling TV comes in two distinct packages, Sling Orange and Sling Blue, both of which cost $25 per month, or you can combine the two (Sling Orange + Blue) for $40 per month. All three of those packages are 40% off for new customers right now, which means you’ll pay either $15 or $25 per month for your first three months. You’ll want either Sling Orange or the combo package, which ensures you get a full suite of ESPN channels. While the service doesn’t carry ABC, you will be able to watch those games on ESPN3. To get NBA TV, you’ll need the Sling Orange Sports Extra Pack, which costs $5 per month and also includes NHL Network, SEC Network, Pac-12 Network, and more. (Here’s a complete guide to Sling TV channels and our Sling TV review.)

Don’t let the name fool you: PlayStation Vue is a great live TV streaming option, and you don’t have to own a gaming console to use it. PS Vue works with Roku, Amazon Fire, and even Kodi. (It’s also the only live TV service available on PS4.) PlayStation Vue offers four different channel packages, starting at $44.99 per month. No matter which one you choose, you’ll get great channels like ESPN and ESPN2, AMC, BBC America, TBS, Disney Channel, and plenty more. To get NBA TV, you’ll need upgrade to the Core package for $49.99 per month. Lucky for you, you can get 20% off the Core package for your first two months, and the deal is good through the playoffs. (Here are all of the PlayStation Vue channels.)

Hulu with Live TV doesn’t offer a way to watch NBA TV, but if that’s not a deal breaker, it’s a great way to watch NBA games online. Plus, each subscription unlocks Hulu’s deep catalog of TV shows and movies, so you’ll have plenty to watch after the final whistle blows. For an extra $4 per month, you can upgrade to Hulu with No Commercials.

The second round of the NBA playoffs are slated to begin April 29, but they could be moved up a day or two, depending on how quickly first-round series wrap up. Likewise, the conference finals are scheduled to open May 14 but could be adjusted. Regardless, the NBA Finals will begin on May 30. We’ll update this schedule as more dates are confirmed.