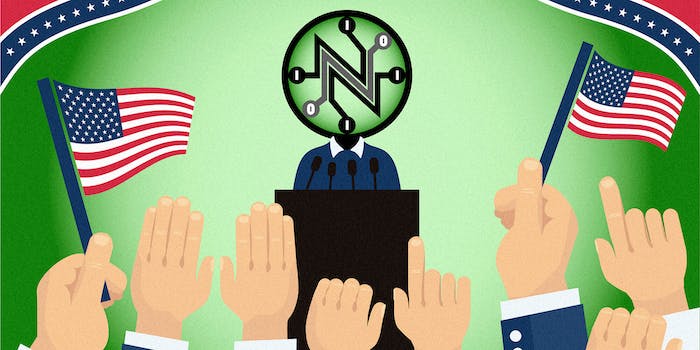 Trump and 2020 Dems clearly have different views on the issue, but can it rise above the noise?

President Donald Trump tweeted Monday about last week’s net neutrality court decision calling it a “big win,” instantly putting him at odds with a number of Democrats seeking their party’s 2020 nomination for president.

While it’s clear Trump and the Democratic hopefuls have opposite views on the issue, it raises the question as to whether net neutrality will become a bigger issue for voters as they head to the ballot box next year in the wake of the court’s decision.

Last week, the United States Court of Appeals District of Columbia Circuit released its much-anticipated decision that will be at the center of the net neutrality debate for the foreseeable future.

The court mostly upheld the Federal Communications Commission’s (FCC) order repealing net neutrality, but also threw out a portion of it that blocked states from enacting their own laws. Most of the focus in the coming months will be on how states react.

The court also upheld the FCC’s classification of internet service providers (ISPs) under Title I of the Communications Act, not Title II, as it was under the 2015 Open Internet Order.

However, the 2020 election could also have an impact on the future of the net neutrality debate. Just as the FCC repealed net neutrality, if a different set of commissioners were appointed to the agency, it could be restored.

It’s evident that net neutrality is an issue thousands of voters are passionate about. It is also one of the few issues in politics that seems to unite people across party lines.

In an election that will be fraught with a number of emotionally charged issues, can net neutrality find its way into the national conversation?

While Trump was claiming victory on the heels of the court decision, several other Democrats have been vowing to restore the rules if they are elected president in 2020.

Over the summer, the Daily Dot asked all of the 2020 Democrats whether they would appoint FCC commissioners who would overturn the agency’s repeal of the rules. Around the same time, other candidates also made announcements about what their plans for net neutrality were.

Sen. Bernie Sanders’s (I-Vt.) campaign told the Daily Dot he would appoint pro-net neutrality FCC commissioners, as did the campaigns for Sen. Kamala Harris (D-Calif.), and Marianne Williamson. Sen. Elizabeth Warren (D-Mass.) announced her intention to do so in a plan. John Delaney told TechCrunch he would do so if elected.

Meanwhile, Mayor Pete Buttigieg said in a plan that he believed legislation would ultimately be “necessary” to reinstate the rules.

While the candidates have their eyes on plans should they take the White House, some in Congress are still trying to push for a legislative solution.

The House of Representatives passed the Save the Internet Act, a bill that would essentially restore the 2015 Open Internet Order, in April—but it has since languished in the Senate. The bill has gained enthusiastic support among net neutrality advocates and many of the 2020 Democrats have expressed support for it.

Despite the pledges—and several 2020 candidates criticizing the decision in the immediate aftermath—the issue hasn’t been overly prominent on the campaign trail. Perhaps it’s not surprising given the current political climate, but that’s one area where several net neutrality advocates think candidates on either side could peel away at a segment of voters.

Evan Greer, the deputy director of digital rights group Fight for the Future, said candidates—and the general political election sphere—were “missing a real opportunity” to talk about it more forcefully in the lead up to ballots being cast.

“I think they wildly underestimate how important of an issue this is,” Greer said, adding that it could swing voters because it is one of the few issues Democrats and Republicans agree on.

The next Democratic debate is Tuesday, Oct. 15.

Matt Wood, the vice president and general counsel of Free Press Action, said while he wasn’t sure how many voters would base their decision on net neutrality specifically, he believes most of the candidates on the Democratic side agree on restoring the rules.

“How much people will, in this very confused environment, pull the lever based on net neutrality, I don’t know,” Wood said. “I think it’s an incredibly important thing—among many other incredibly important communications rights and technology policy issues—but we have no shortage of crises.”

“Because it has been in the real world—in voters minds—pretty noncontroversial, and within the Democratic party class of elected folks—among people in Congress and as we’ve seen down to the governor and mayor level and the presidential campaigns … I don’t know if it would light up the debate stage, because I think everybody up there would agree.”

Meanwhile, Mark Stanley, the director of communications at Demand Progress, said following the court decision he thought it was more “imperative” for presidential candidates to pledge to restore the rules—and noted that there are hundreds of thousands of people who want a clear cut answer.

Demand Progress is one of several groups who have launched a petition asking for 2020 candidates to pledge to undo the FCC’s repeal, reinstate Title II protections, ban zero-rating, and reject campaign contributions from telecom executives, PACs, or lobbyists. The petition surpassed 200,000 signatures over the weekend, Stanley said.

“The court found major flaws with the FCC’s decision, but ultimately deferred to the FCC on classification based on prior legal precedent. Because of the court’s decision, it’s imperative that all presidential candidates get behind strong net neutrality rules and Title II classification.”

“It really is imperative that all presidential candidates support restoring net neutrality rules … It’s going to be one of the fronts we continue to focus on, including the push for legislation to be passed in the Senate and legislation in the states as well.”