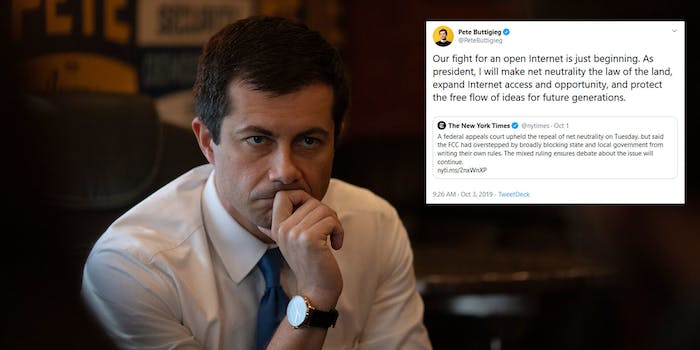 Buttigieg joins several other 2020 Democrats in voicing his opinion about the court decision.

Mayor Pete Buttigieg, a 2020 Democratic presidential hopeful, weighed in on this week’s federal court decision regarding net neutrality on Thursday, saying that the fight to reinstate an “open internet” was “just beginning.”

Buttigieg, who has voiced his support for net neutrality in the past, made the remarks in the wake of a decision handed down by the United States Court of Appeals District of Columbia Circuit on Tuesday.

The court largely upheld the Federal Communications Commission’s (FCC) repeal of 2015’s federal net neutrality rules, but threw out a portion of the repeal order that blocked states from implementing their own net neutrality laws in absence of ones on the federal level.

“Our fight for an open Internet is just beginning,” Buttigieg tweeted. “As president, I will make net neutrality the law of the land, expand Internet access and opportunity, and protect the free flow of ideas for future generations.”

Our fight for an open Internet is just beginning. As president, I will make net neutrality the law of the land, expand Internet access and opportunity, and protect the free flow of ideas for future generations. https://t.co/zEsCJeMhTf

Buttigieg is one of several 2020 candidates who have weighed in on the decision, including Sen. Bernie Sanders (I-Vt.), Sen. Kamala Harris (D-Calif.), and Sen. Amy Klobuchar (D-Minn.).

Earlier this summer Buttigieg—as part of a rural economy plan—said that he felt legislation would “ultimately be necessary” to restore the rules.

Since the decision was announced, some lawmakers, including Sen. Edward Markey (D-Mass.) have called for the Senate to vote on the Save the Internet Act.

Other proposals have been floated by some lawmakers but have not received the same enthusiastic support as the Save the Internet Act for a variety of reasons.