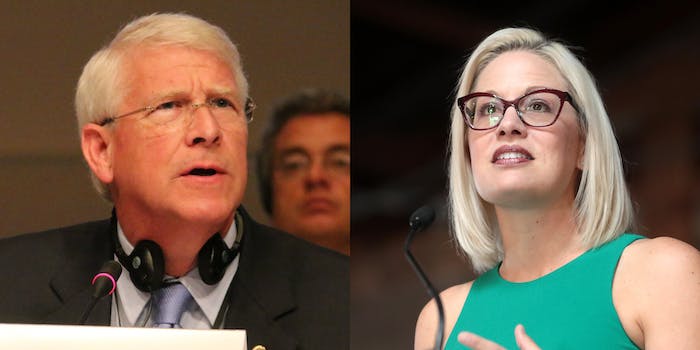 Their working group has been criticized by net neutrality advocates.

The update from the two senators comes on the heels of a federal court decision on Tuesday that upheld much of the Federal Communications Commission’s (FCC) repeal of net neutrality–but also struck down a portion of it that blocked states from enforcing their own rules to replace a lack of federal ones.

The working group with Wicker and Sinema has been harshly criticized by net neutrality advocates. Sinema is the lone Democrat not to have cosponsored the Save the Internet Act, a bill that would essentially restore the 2015 Open Internet Order. The Arizona senator not joining her colleagues has caused a rift with some members of her state’s party.

The bill passed in the House of Representatives in April, but has since stalled in the Senate. Wicker blocked an attempt by some Democratic senators to force a vote on the Save the Internet Act earlier this year.

Many net neutrality advocates have urged that Title II is the best way to regulate ISPs.

The Title I and Title II argument was central to Wicker’s statement following Tuesday’s decision.

“Today’s ruling makes clear that Title II regulations are not required for maintaining an open internet,” Wicker said in a statement. “It is incumbent on Congress to pass federal net neutrality standards that will protect consumers, promote broader access to the internet, and ensure internet providers treat content from all sources fairly. We need straightforward guidelines that will not change based on who occupies the White House. I look forward to continuing to work toward these goals with Senator Sinema as we seek to find common ground on this important issue.”

“Net neutrality is critical to maintaining a vibrant internet. We need a modern, internet-specific framework that encourages the freedom and innovation that make the internet the vital tool it is today,” Sinema said in a statement. “Today’s court decision makes clear Congress must pass a bipartisan, comprehensive net neutrality solution that offers certainty to consumers and providers.”

In May, Sinema’s office told the Daily Dot the group had met with “a diverse group of experts with a wide range of opinions on how to codify net neutrality, protect internet freedom, and ensure robust investment.”

Representatives for Wicker or Sinema did not immediately respond to requests for comment about any updates regarding the working group–including who the working group had met with, and whether they were close to unveiling a bill.

We’ll update this story if we hear back.

On the other end of the legislation argument, Sen. Edward Markey on Tuesday argued that the court’s decision made it “imperative” that the Senate pass the Save the Internet Act.