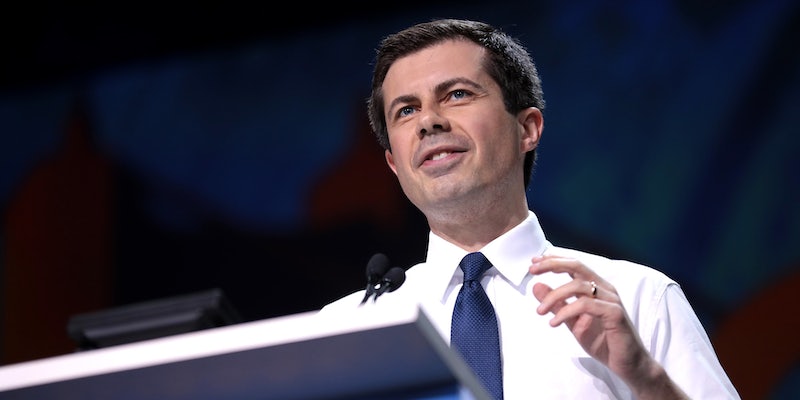 Mayor Pete Buttigieg, a 2020 Democratic hopeful, said on Tuesday that restoring net neutrality would be a priority for him if elected president.

Buttigieg made the announcement in a rural economy plan that was unveiled by his campaign on Tuesday. The South Bend, Indiana, mayor said he believes legislation would be “necessary” to restore net neutrality because of the back-and-forth nature of the Federal Communications Commission’s (FCC) leadership board.

As part of the announcement, Buttigieg said that he would create an “Internet For All” plan that would invest $80 billion to increase broadband coverage in underserved and unserved areas of of the country.

The plan includes creating a public option for internet access, fixing the FCC’s coverage maps, and creating a “Broadband Innovation Incubator office” within the Department of Commerce’s National Telecommunications and Information Administration, among other things.

“Pete will restore net neutrality obligations to ensure an open internet,” Buttigieg’s plan reads. “Given the FCC’s volatility on this issue, Pete believes that legislation will ultimately be necessary to provide real protections for net neutrality on the internet. Pete’s $80 billion initiative will require internet providers to abide by strict open internet rules that prohibit the blockage or throttling of websites and services.”

Buttigieg has joined several 2020 candidates who have brought up net neutrality on the campaign trail or proposed restoring the rules.

Congress recently attempted to pass legislation to codify the rules. The Save The Internet Act would essentially restore the 2015 Open Internet Order, but after passing in the House of Representatives earlier this year, it stalled in the Senate.

Buttigieg has signaled in the past that he’s in favor of restoring net neutrality. After the FCC’s repeal in 2017, Buttigieg tweeted about his opposition to the decision.

The truth is this #NetNeutrality decision probably won't affect your daily life. Unless you use the Internet.

He also signed the Cities Open Internet Pledge, a pledge signed by mayors of American cities that required internet providers that do business with cities to adhere to net neutrality principles.

Earlier this year Buttigieg also said he wanted to restore net neutrality when asked about it on the campaign trail.