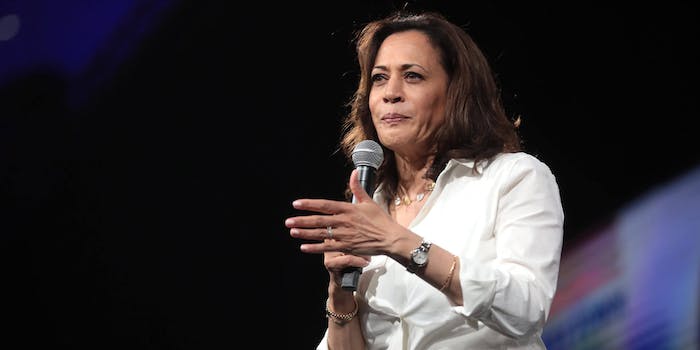 Kamala Harris on net neutrality: ‘the fight to protect the future of the internet continues’

The presidential hopeful on the fight for the future of the internet.

On Tuesday the United States Court of Appeals District of Columbia Circuit rules that most of the Federal Communications Commission’s (FCC) repeal of the rules would be upheld, but also threw out a portion of it that blocked states from enacting their own laws to replace the federal ones that were repealed.

The state Harris represents, California, is one of several states that passed net neutrality laws after the FCC’s repeal. The state was subsequently sued over its law, and the lawsuit was put on hold until a decision was made by the court of appeals.

In a statement to the Daily Dot, Harris noted the decision by the court to throw out the FCC’s preemption over states and also said she was proud to sponsor the Save the Internet Act, a bill that would essentially restore the 2015 Open Internet Order.

The Save the Internet Act passed in the House of Representatives in April but has stalled in the Senate.

“After today’s court decision on net neutrality, the fight to protect the future of the internet continues,” Harris said in a statement to the Daily Dot late Tuesday. “The court sent a clear message that state and local governments can continue their leadership to protect net neutrality in their communities, such as California has done. And I’m proud to be a co-sponsor of the Save the Internet Act in the Senate and will continue to work to restore net neutrality.”

Harris has been vocal in her support for net neutrality in the past.

In August, the senator’s campaign told the Daily Dot she would “appoint an FCC Chair who is committed to bringing back” the rules if elected president in the 2020 election.

Since the Save the Internet Act passed the House, Harris has also tried to drum up support for the bill on social media.

The California senator also submitted questions to Supreme Court Justice Brett Kavanaugh during his confirmation hearings asking whether he would recuse himself from a hypothetical net neutrality Supreme Court case because of a dissent he wrote in 2017.