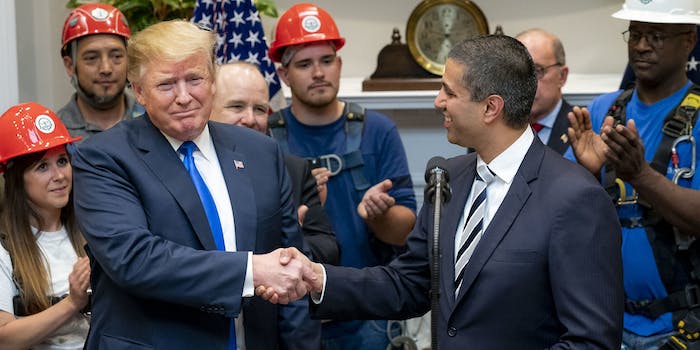 Trump has a different take on the ruling than a number of his potential 2020 challengers.

The court mostly upheld the Federal Communications Commission’s (FCC) order that repealed net neutrality, but also threw out a portion that blocked states from enacting their own laws in the absence of rules at the federal level.

Nearly a week later, Trump jumped into the discourse.

“We just WON the big court case on Net Neutrality Rules! A great win for the future and speed of the internet. Will lead to many big things including 5G. Congratulations to the FCC and its Chairman, Ajit Pai!” the president tweeted early Monday morning.

We just WON the big court case on Net Neutrality Rules! A great win for the future and speed of the internet. Will lead to many big things including 5G. Congratulations to the FCC and its Chairman, Ajit Pai!

While Trump may be claiming victory, there are some aspects of the ruling that advocates see as a win.

Most net neutrality advocates were hoping the FCC’s repeal would be overturned as part of the court decision, but they said the ruling also opened the door for states to push forward with their own laws.

Since the repeal, several states have passed their own net neutrality laws or executive orders. One in particular—in California—goes beyond the original 2015 Open Internet Order that was repealed and was slapped with a lawsuit from the federal government after it passed late last year.

The suit was put on hold until after the United States Court of Appeals District of Columbia Circuit released its decision, setting up a potential new locus in the net neutrality battle.

The court told the @FCC it couldn't stop states from making their own #NetNeutrality rules. It also sent a bunch of issues back to the @FCC.

Rolling back net neutrality put Washington on the wrong side of the law, history and the American people. https://t.co/4Bgr9VyLrX

Monday was not the first time Trump has tweeted about the issue.

In 2014, Trump called net neutrality a “top down power grab” as the then-Democratic controlled-FCC was crafting what would eventually become the 2015 Open Internet Order.

Obama’s attack on the internet is another top down power grab. Net neutrality is the Fairness Doctrine. Will target conservative media.

While Trump was celebrating the court’s ruling, a number of Democrats hoping to challenge him in the 2020 presidential election criticized it.

Sen. Bernie Sanders (I-Vt.) almost immediately blasted it. The Vermont senator said the ruling threatened “to give more power to unaccountable companies like AT&T, Comcast and Verizon over what we see and do on the internet.”

Meanwhile, Sen. Kamala Harris (D-Calif.) told the Daily Dot last week that “the fight to protect the future of the internet continues” and noted how states could move forward with their own laws.

Other 2020 hopefuls like Mayor Pete Buttigieg and Sen. Amy Klobuchar (D-Minn.) also criticized the ruling and a number of candidates have pledged to restore the rules in some fashion if they are elected president.