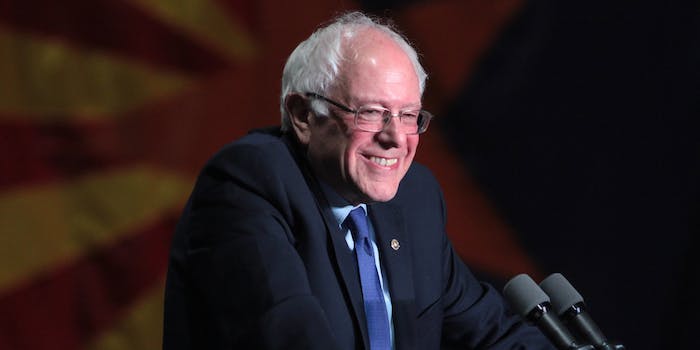 Sanders has long been vocal in his support of net neutrality.

If elected president, Sen. Bernie Sanders (I-Vt.) will appoint commissioners to the Federal Communications Commission (FCC) that will reinstate net neutrality rules, his campaign told the Daily Dot on Tuesday.

“Bernie Sanders believes net neutrality is fundamental to communication, commerce and competition,” a spokesperson for senator’s campaign told the Daily Dot. “When Bernie Sanders is president, he will appoint FCC commissioners who will reinstate net neutrality protections and make sure that giant corporations treat all content and traffic equally.”

Sanders is one of a number of candidates vying for the Democratic nomination to run against President Donald Trump in the 2020 presidential election. The FCC repealed net neutrality rules in 2017, and a ruling regarding a federal lawsuit challenging its decision is expected to come from the United States Court of Appeals District of Columbia Circuit in the coming months.

The stance on net neutrality from Sanders is not surprising—the Vermont senator has long been vocal in his support of the rules.

Ahead of the FCC’s decision to nix the 2015 Open Internet Order, Sanders said any repeal would be a “disaster for our country, for our small businesses and for the free flow of ideas.”

In 2014, Sanders also gave a speech on the Senate floor in support of net neutrality—calling the possible use of fast lanes “grotesquely unfair”—where he read comments he’d received from constituents about the issue.

During the speech, Sanders read a comment from someone who believed that the internet should be treated like a “utility,” and classified as “common carriers” which the 2015 Open Internet Order did under Title II of the Communications Act. That is a classification that has become a sticking point which has halted any legislation in Congress.

The Vermont senator was vocal in supporting the ultimately unsuccessful effort by Congress to use the Congressional Review Act (CRA) to overturn the FCC’s repeal.

He also co-sponsored the Senate version of the Save the Internet Act this year, a bill that would have restored the repealed rules. That bill passed the House of Representatives but was blocked in the Senate.