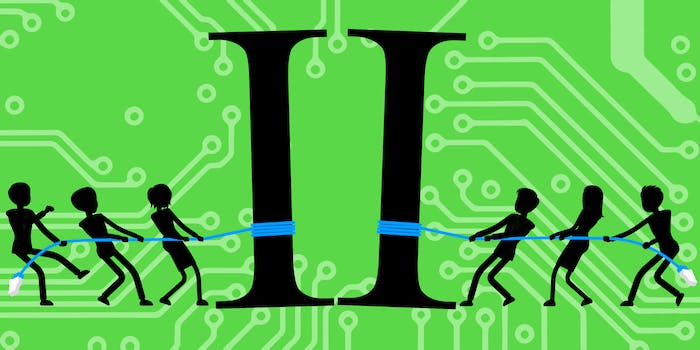 With the 'Save The Internet Act' rolling along, what is the biggest divide between Republicans and Democrats?

While there has been a lot of talk about bipartisanship amid the numerous hearings held for net neutrality legislation in Congress over the past several weeks, there is one major point of contention: Title II of the Communications Act.

And like most problems in Washington, it is split down party lines.

The Save The Internet Act was introduced by Democratic lawmakers in the Senate and House of Representatives earlier this month, and it passed a subcommittee markup earlier this week. The bill would undo the Federal Communications Commission’s (FCC) repeal of net neutrality and restore the 2015 Open Internet Order, which established net neutrality rules.

Both Republicans and Democrats have dug into their stances on Title II—and those strident concerns were on display at two net neutrality-focused House subcommittee hearings, including a legislative hearing for the Save The Internet Act, and its markup hearing earlier this week.

For something that sounds quite mundane, there has been a stark difference in opinion on display.

But for net neutrality supporters, Title II is the best way to ensure that the rules of the road are solidified moving forward.

Title II of the Communications Act concerns what are called “common carriers,” like an electric utility. The rules have been in place since 1934, originally established to try and combat telephone monopolies.

The FCC previously tried and failed to classify ISPs under Title I, which concerns “information services,” but were knocked down in courts.

Verizon sued the FCC because it did not believe the agency had the authority to impose the rules, as the Nation pointed out at the time.

In 2014 the U.S. Court of Appeals for the District of Columbia found that Title I was not an appropriate classification amid that lawsuit.

In response, the FCC—under former Chairman Tom Wheeler—classified ISPs under Title II. That decision was also taken to court. And in 2016, the United States Court of Appeals for the District of Columbia ruled in favor of the FCC.

The Open Internet Order purposefully did not enforce a vast majority of regulations under Title II using a procedure known as “forbearance.”

As the Electronic Frontier Foundation explained in 2014, “forbearance” was key in the FCC’s Title II classification process, as it “expressly commits” the agency not “to apply certain rules.” One of these rules the FCC agreed not to impose was rate regulation.

The Save The Internet Act does two main things: it sweeps away the FCC’s repeal of net neutrality, and reapplies the Open Internet Order, once again classifying ISPs under Title II.

That classification is at the crux of the arguments surrounding a possible net neutrality legislative solution, and have played out in real time as the Save The Internet Act inches closer to a full vote in the House.

During both House Energy & Commerce communications and technology subcommittee hearings regarding net neutrality, Republicans have railed against Title II.

Rep. Bob Latta (R-Ohio), the ranking member of the subcommittee, called the use of Title II “extreme” during the hearing earlier this month.

“The idea that only Title II is real net neutrality is dangerous and wrong,” Latta said. “Those who are newer to the subcommittee or to this debate should not be fooled. You have heard over and over again that we need to protect consumers from blocking, throttling, and internet fast lanes, which sounds reasonable enough.  Well, we can easily do all of this without giving the government free reign over the internet through the specter of Title II. Everyone who has followed this net neutrality debate, or on even the most superficial level, is aware that Title II is a non-starter with Republicans, and even with some Democrats.”

It’s not entirely clear what Latta meant by Democrats agreeing with him, however as Motherboard reported shortly after the hearing, some Democrats on the subcommittee called for “compromise” with the Save The Internet Act, which some advocates believed may have been being open to changes with Title II.

Ultimately, the bill passed a markup without amendments.

Latta later said he was concerned with the “broad authority” Title II gives to the FCC, and the “free reign” argument was highlighted during the same hearing, when he listed off a number of possible regulations that hypothetically could happen under Title II.

The Ohio lawmaker asked Robert M. McDowell, a senior fellow at Hudson Institute and partner at Cooley LLP, about a number of hypothetical scenarios that could happen under the full weight of Title II including: the government setting prices, the government determining what services ISPs could offer Americans and how they could be bundled together, the government telling ISPs how to invest, the government dictating how the internet should be interconnected, and the government making ISPs share networks.

McDowell answered yes to all of the hypotheticals, suggesting that under the full weight of Title II many of those options were on the table.

On Tuesday, during the bill’s markup hearing, Rep. Greg Walden (R-Ore.) called the inclusion of Title II “not necessary” for any net neutrality bill, and argued that it “could provide the federal government with near unlimited and unchecked authority for bureaucrats in Washington that oversee the internet.”

However, Democrats have argued that such predictions are unfounded given the nature of the Save The Internet Act, and how it agrees to not impose those rules Republicans are fearmongering about.

Meanwhile, it’s not just Republican lawmakers who have pressed against Title II.

Michael Powell, the former FCC commissioner who spoke during the subcommittee’s first net neutrality-centric hearing in February, argued in an op-ed for USA Today that the inclusion of Title II in the Open Internet Order was done “without any thought to the consequences,” and called Title II a “morass of old telephone laws.”

“The Wheeler FCC’s controversial move also shattered the strong bipartisan consensus that had formed around net neutrality policy and politicized the issue,” Powell wrote. “This has created the ping-pong syndrome where rules will swing back and forth wildly every time a new administration comes to power—never producing a resolution for consumers and innovators. This uncertainty only chokes rather than nourishes modern communications networks.”

Republican lawmakers have made their position even clearer on Title II with a number of net neutrality bills that were introduced shortly after it was announced that Democrats, now in control of the House, would be having a hearing about the issue.

The bills do not classify ISPs under Title II, and in a letter to Democrats, Republicans said they rejected the “special interest groups who insist on Title II or nothing.”

One of the bills’ authors, Rep. Cathy McMorris Rodgers (R-Wash.), recently told CNET that Title II gave her concerns “about the impact on innovation and investment,” and said she had concerns with “any part” of Title II being in a net neutrality bill.

The impact on investment was also a reason that FCC Chairman Ajit Pai, a Republican, touted ahead of the agency’s repeal of net neutrality in 2017. His claims have been questioned by net neutrality advocates.

Following the Save The Internet Act’s subcommittee markup on March 26, Republicans blasted the bill, saying it would “pave the way for a heavily regulated internet.”

“Democrats continue to push forward with a purely partisan approach that could provide the federal government near unlimited and unchecked authority to regulate the internet, from decisions over content, to levying taxes and fees for internet access,” they wrote.

Some Democrats, including Rep. Mike Doyle (D-Penn.), have argued that despite misgivings from Republicans, the Save the Internet Act actually solves many of the issues they have raised concerns about regarding Title II.

Instead of a future FCC deciding that it wanted to ignore the “forbearance” from the Open Internet Order, the Save The Internet Act would require an act of Congress for any FCC to do so. This, Doyle has argued, is a step toward helping quell Republican’s fears with the bill.

The bill uses Title II as a foundation for net neutrality, much like the Open Internet Order, but makes it extremely difficult for hypothetical regulations like the ones Latta brought up during last month’s hearing to actually come to fruition.

“This legislation puts all the sections and regulations that were forborne into statute so that no new FCC chairman can undo it. It would take an act of Congress for someone to do rate regulation or network unbundling,” Doyle told CNET recently. “This was a major step toward the Republicans and the ISPs, which the Republicans chose not to recognize.”

On Tuesday, Doyle summarized his thoughts ahead of the Save The Internet Act getting that subcommittee markup, where it passed along party lines 18 to 11.

“By codifying the order this legislation also permanently prevents the FCC from applying 27 sections of the Communications Act, as well as over 700 regulations–the majority of Title II,” Doyle said during the markup. “In doing so, the bill permanently prohibits the FCC from engaging in rate setting, requiring that broadband providers unbundle their network, or levying additional taxes or fees on broadband access… This bill removes much of the regulatory overhang that Title II that internet service providers and our colleagues on the other side of the aisle have long complained about.”

“I would say a lot of members of Congress and lobbyists are trying to kick up mud about all the scary things that could happen under Title II, and the way this bill is written those are impossible,” Tabish told the Daily Dot. “For the Title II doomsday scenarios pushed by lobbyists and Republican members of Congress, it would take an act of Congress to make that happen. The way these regulations are being written into law totally takes all of that hair-on-fire, catastrophizing, Title II hysteria off the table.”

Despite the clear difference in opinions surrounding Title II, there have been countless mentions by both Democrats and Republicans about trying to find a “bipartisan solution” for net neutrality.

However, there are other options that have been floated by lawmakers—and they could be a sign of where some lawmakers in the Senate hope to go.

In 2018, former Colorado representative Mike Coffman was the only Republican to sign onto the net neutrality CRA in the House. At the same time, he introduced the “21st Century Internet Act,” a bill that would codify net neutrality and create a “Title VIII” in the Communications Act, aimed at resolving the Title II debate.

The bill would have barred blocking, throttling, and other net neutrality concerns, and would have also given the FCC authority to investigate and enforce these concerns.

However, Tabish said the creation of a new title in the Communications Act could muddy the waters on a bill that he believes addresses the right concerns in protecting net neutrality.

Tabish said the fact that there have been no net neutrality rules since the FCC repeal in late 2017 means that instead of trying to create something new, Congress should act now on the bill that is in front of them.

“We have all this jurisprudence saying that Title I is inappropriate and Title II is appropriate. We have all of the bazillions of arguments and thousands of pages of filings that have been drafted on the subject by public interest groups, lawyers, tech companies that support strong open Internet protections, and we know that the 2015 Open Internet Order and the substance of enjoy immense support across the political spectrum,” Tabish said. “So, that’s kind of where the energy is, that’s where the support is, and that’s what all the evidence points toward.”