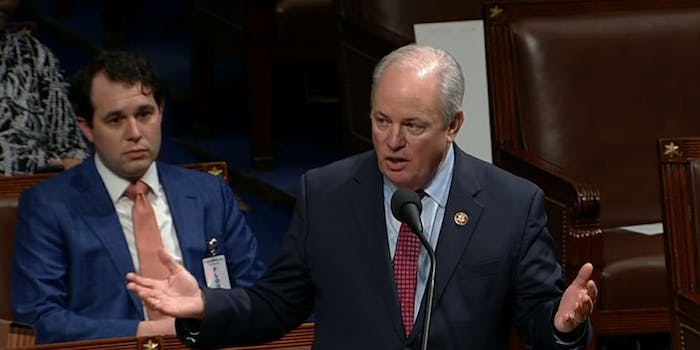 The fight for net neutrality scores a major win. But does it have a prayer in the Senate?

The Save the Internet Act, a bill that would restore net neutrality rules, passed through the House of Representatives on Wednesday, setting up an uncertain fate in the Senate.

The bill passed 232 to 190, with one Republican voting in favor of it. It would repeal the Federal Communications Commission’s (FCC) repeal of net neutrality and restore the 2015 Open Internet Order.

“Today, the House voted to restore a free and open internet for the American people,” Rep. Frank Pallone (D-N.J.), the chairman of the House Energy and Commerce Committee, said after the vote, adding: “The American people are rightfully demanding that critical net neutrality protections be restored in law, and I’m hopeful this strong House vote helps build momentum for action in the Senate.”

The debate surrounding the bill and its amendments stretched between Tuesday and Wednesday. Before the debates began on Tuesday, House Minority Leader Kevin McCarthy posted a video slamming the bill, calling it the Democrats’ plan to “take over the internet,” a theme that was repeated numerous times by lawmakers during the debate ahead of the vote.

Republicans also lamented a lack of bipartisan work on the bill, echoing sentiments made during the subcommittee and full House committee markup hearings in the past several weeks.

Democrats have argued that the bill addresses many of the concerns Republicans have brought up and have offered amendments to try and answer questions Republicans raised.

Despite the differences in opinion over the two days of debate and the weeks of discussion about the substance of the bill, the Save the Internet Act was always expected to easily pass through the Democrat-controlled House of Representatives.

There was a moment close to the final vote where Rep. Greg Walden (R-Ore.) tried to use a “motion to recommit” that would send the bill back to committee and an amendment that would make sure the bill did not “modify, impair, supersede, or authorize the modification, impairment, or supersession of the Internet Tax Freedom Act.”

Doyle, at times raising his voice, called Walden’s motion to recommit “completely unnecessary” and an attempt to “delay and confuse” people about net neutrality.

Ultimately, the bill did pass with several amendments including a study of how the loss of net neutrality impacted people of color, a study of the internet ecosystem, a study to get standalone broadband to rural communities, and reiterating that internet service providers can block unlawful content, among others.

With the Save the Internet Act passing in the House the focus of the bill will now be on the Senate.

Unlike the House, the Senate is controlled by Republicans, meaning Democrats who support the bill will have to convince numerous colleagues from across the aisle to join them in voting for it.

However, a similar effort last year did get Republican support. When Democrats in Congress tried to use the Congressional Review Act (CRA) to overturn the FCC’s repeal, several Senate Republicans voted in favor for it, leading to it passing. The CRA died in the House, which was controlled by Republicans at the time.

This year, however, there is no guarantee that the same Republicans will again vote in favor of a bill to restore net neutrality and there is one Democrat who has yet to co-sponsor the bill.

It also isn’t clear if Senate Majority Leader Mitch McConnell (R-Ky.) will consider the bill. On Tuesday he called the bill “dead on arrival in the Senate,” according to Reuters.

In response to McConnell’s deceleration, Sen. Edward Markey (D-Mass.), who sponsored the Senate version of the bill, called on Republican lawmakers to push for it to come up for a vote.

“82% of Republicans want #NetNeutrality. 85% of independents. 86% of all Americans. Yet Leader McConnell gets to decide the fate of the internet. That’s not how a democracy should work,” Markey wrote on Twitter on Tuesday afternoon. “@SenateGOP: listen to your constituents and bring the Save The Internet Act up for a vote.”

82% of Republicans want #NetNeutrality. 85% of independents. 86% of all Americans. Yet Leader McConnell gets to decide the fate of the internet.

That’s not how a democracy should work. @SenateGOP: listen to your constituents and bring the Save The Internet Act up for a vote. https://t.co/yrU8qsBgSS

If the Save the Internet Act does pass in the Senate, the White House has signaled that it would recommend that President Donald Trump veto the bill.

The Office of Management and Budget released a statement of policy on Monday—the day before the House vote—where it said the administration opposed the Save the Internet Act because it would “return to the heavy-handed regulatory approach of the previous administration.”

Despite the uphill battle, a number of pro-net neutrality internet rights groups applauded the vote and vowed to continue fighting as the bill moves onto the Senate.

“We are charging ahead and getting closer to restoring net neutrality every day,”  Evan Greer, deputy director of Fight for the Future, said in a statement. “President Trump and Mitch McConnell can say whatever they want, but the writing is on the wall: there is overwhelming public consensus in support of real net neutrality and it’s only a matter of time before we win. The politicians standing in the way of Internet freedom are embarrassing themselves–they’ll go down in history as incompetent, corrupt, and out of touch. Republican, conservative, and libertarian voters don’t want their cable company to control what websites or apps they can visit or where they can get their news. Misinformation and astroturf campaigns can only do so much–if I were a GOP staffer I’d be telling my boss to get off this sinking ship before it’s too late.”

Craig Aaron, the president and CEO of Free Press Action, echoed those sentiments.

“As this crucial legislation heads to the Senate, industry lobbyists want people to believe it doesn’t have a chance. They want to discourage people from showing up and urging their senators to vote in favor of the Save the Internet Act. That won’t work,” Aaron said in a statement. “Senators must know by now that people across party lines support net neutrality protections by large majorities. Mitch McConnell and other Senate leaders need to decide whether they’re going to stand with more than 80 percent of voters in their own party or do the cable companies’ dirty work. To prevent a Senate vote on this bill would be wrong, politically short-sighted and an underestimation of the internet’s readiness to mobilize and fight for net neutrality.”