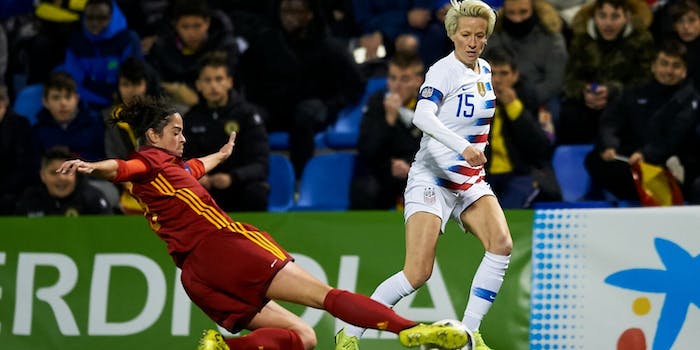 How to watch the U.S. vs. Spain at the World Cup for free

It's win or go home now.

The 2019 FIFA Women’s World Cup gets serious now: It’s progressed to the knockout rounds, meaning that teams either win or go home. One tournament dark horse, Australia, is already out after succumbing to Norway—via penalty kicks—in their round of 16 match. Now, the U.S. faces its own knockout match with a Spain team that survived a group that included Germany and China.

The U.S. still looks every part the favorite to win the tournament, beating all three foes in their group by an 18-0 margin. It only gets tougher from here, though. Beating Spain sets up for a quarterfinal match with France, whose favorite status is made even more formidable by being the host nation. Winning on Monday sets up a matchup that might have even more fireworks than the final.

Here’s everything you need to know to watch the United States vs. Spain at the 2019 FIFA Women’s World Cup.

Each of the following services carries Fox, providing a one-week trial and therefore an easy way to watch U.S. vs. Spain at the 2019 Women’s World Cup for free.

United States vs. Spain: Why it matters

It would be shocking for the U.S. to exit the tournament this early, but Spain’s a team that can play with the U.S. The teams dueled in Alicante this past January, with the U.S squeaking out a 1-0 win. It’s very possible, though, that we’ll see a rotated lineup to help rest players needed against the tougher opponents awaiting them, so we may see a lineup looking more like the one that faced Chile than the one that faced Sweden.

Julie Ertz, who missed the last match with a hip contusion, will be likely to return to action, which is great news, as her play in defensive midfield is essential in connecting the team’s yet-to-be-tested defense against their potent offense. One thing is certain, though, assuming the U.S. gets a win Monday: It only gets tougher from here.