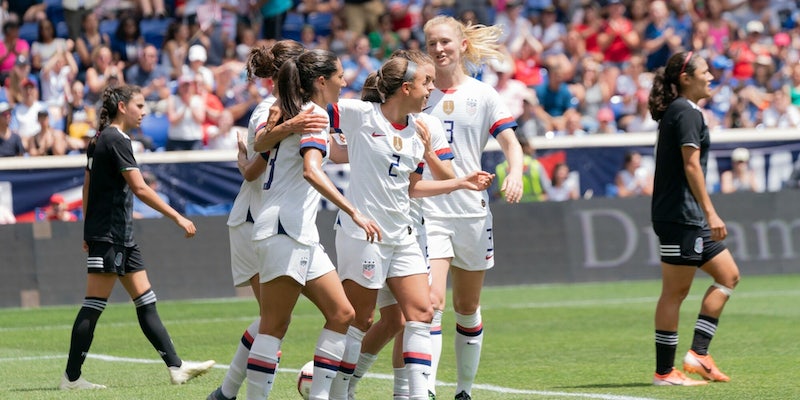 The U.S. is the favorite and defending champion, but could they be dethroned?

Starting June 7 and running a full month—until the July 7 finals in Lyon—the 2019 FIFA Women’s World Cup is the quadrennial soccer tournament featuring the world’s best women’s soccer teams. The United States, who emphatically won the 2015 edition of the tournament hosted by Canada, face challenging competition in their title defense. They do have an immensely talented team, especially in attack and midfield, and most of the players have prior World Cup experience, but there are some questions about their defensive depth and how they measure up against some of the contenders.

Here’s everything you need to know to watch the 2019 FIFA Women’s World Cup.

What is the FIFA Women’s World Cup?

Only around since 1991, the tournament’s inaugural edition was held in China and won by the U.S. The 1995 edition in Sweden was won by neighboring Norway, the 1999 edition was held in the U.S. and famously won by the hosts. (You might remember the dramatic penalty shootout against China to cap off the successful tournament run.) While Germany and Japan won World Cups leading up to the 2015 edition, the U.S. has never finished lower than third place.

The Women’s World Cup is organized like the U-20 World Cup currently taking place in Poland: Six groups of four teams each compete in the group stage, and then the winners and second place teams in each group advance to the knockout rounds, along with the top four of six third-place teams in each group. Those 16 teams face off in win-or-go-home matches, halving the field with each round leading to the July 7 final.

Which Women’s World Cup teams should you know?

Let’s start with the three-time champion Americans. If you watched the 2015 edition of the tournament, you’ll recognize names like Carli Lloyd (currently in a super-sub role), Alex Morgan (typically the starting center forward), Megan Rapinoe (a seasoned midfielder known for her pinpoint passes), Julie Ertz (Julie Johnston during the 2015 edition, a steady defensive midfield presence), and Ali Krieger (who has played 100 times for the U.S. women as a defensive anchor). The team also has some players new to the World Cup but not the USWNT. Look for players like Crystal Dunn and Mallory Pugh to impress with their pace and poise, starting goalkeeper Alyssa Naeher to stop shots with authority, and six-footer Samantha Mewis to be a secret weapon; in recent qualifying matches, she’s been one of the team’s main scoring threats through her tenacity.

Germany, England, and France round out the world’s Top 4, and the growth of the women’s game worldwide has allowed their talented squads to gain valuable experience for club as well as country. The USWNT’s historic border rival, Canada, includes a number of players who play professionally in the U.S., including the legendary Christine Sinclair, approaching 300 international starts and 200 international goals and starring for the NWSL’s Portland Thorns. Another living legend, Marta, anchors a talented Brazil team while playing her club soccer with the Orlando Pride alongside Morgan, Krieger, and USWNT goalkeeper Ashlyn Harris.

When does the USWNT play?

Games will be broadcast on Fox, FS1, and FS2.

Each of the following services carry Fox, FS1, and FS2 and provide a one-week trial and therefore an easy way to watch FIFA U-20 World Cup matches for free. (Telemundo will handle Spanish coverage for American audiences.)

FuboTV is a solid TV streaming service option, whether your tastes run to entertainment (AMC, Syfy, FX), news (MSNBC, CNN), or sports (NBA TV, NFL Network). If you’re a soccer fan, however, it will appear tailor-made for you, with 10 beIN SPORTS channels, NBCSN, FS1, FS2, UniMás, and Champions League actions via TNT all on tap. And for the Women’s World Cup, it’s especially strong, promising to stream each match in 4K. If you can’t watch a match live, FuboTV offers a three-day replay for each match and 30 hours of cloud DVR. (Check out the complete FuboTV channels list.)