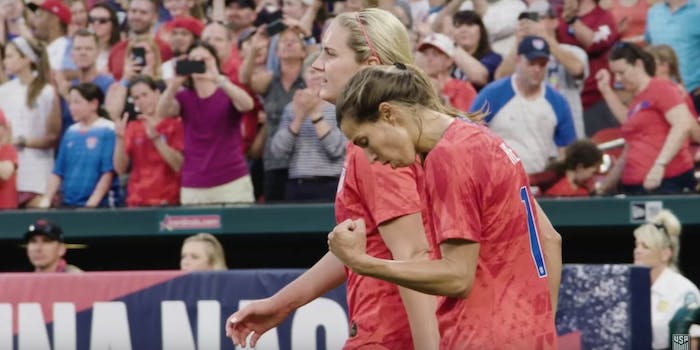 How to watch the U.S. women vs. Sweden online for free

The good news is the U.S. women's team is on to the knockout rounds. Depending on Thursday's result, one of two daunting paths lie ahead.

The U.S. still looks like the most dominant team at the 2019 FIFA Women’s World Cup, following its opening 13-0 win over Thailand with a less eye-popping 3-0 win over Chile. (Many lauded the heroics of Chilean goalkeeper Christiane Endler for keeping the scoreline to just 3-0.) That could all change with what’s to come, starting with Thursday’s match against Sweden to close out group play.

Sweden comes into the tournament with more prowess and more seasoning than either Thailand or Chile: They’re the 9th-best team in the world according to the FIFA World Rankings, and they defeated the U.S. in the 2016 Olympics, ousting them far earlier than most expected. While the U.S. has already clinched their trip to the knockout rounds, the outcome of Thursday’s match will send them on one of two perilous paths—either of which could see them exit well before the finals.

Here’s everything you need to know to watch the United States vs. Sweden at the 2019 FIFA Women’s World Cup.

Each of the following services carries Fox, providing a one-week trial and therefore an easy way to watch U.S. vs. Sweden at the 2019 Women’s World Cup for free.

United States vs. Sweden: Why it matters

The good news for both teams is they’re both through to the top 16 and the knockout rounds, regardless of the outcome of Thursday’s match. If the U.S. wins on draws, they’ll win Group F and will play Spain in the first knockout match on Monday. However (and this is a big however), winning that match will lock them into a quarterfinals match with France—unless France has an unlikely stumble in the Round of 16. France, of course, is the host nation, a tournament favorite, and arguably as cohesive a unit as the U.S. team. It would be a matchup worthy of the finals, happening a full nine days before the actual finals. (Friday, June 28, if you want to clear your calendar now.)

But the Group F runner-up will get an equally daunting path to the semifinals: First, facing the Group E winner (who will either be Netherlands or Canada, both excellent teams that have the ability to reach the finals), and then likely facing Germany (another favorite) if they emerge from that battle.

Also worth watching in this one: How the vaunted U.S. offense fares against the best defense they’ll face thus far. Alex Morgan, who scored five goals in the opener, sat out against Chile and then Australia’s Sam Kerr scored four goals in the Matildas’ group stage finale to tie Morgan for the Golden Boot lead. Expect Morgan to start and add to her totals, but expect Sweden not to make it easy.