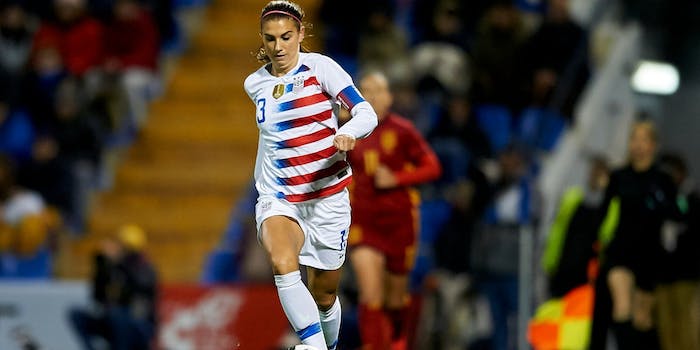 How to watch the U.S. women’s team vs. Thailand for free

It’s finally here! On the fifth day of play in the 2019 FIFA Women’s World Cup, the United States, defending champions and one of the favorites to lift the trophy on July 7, will begin their campaign against Thailand. The Group F opener provides the U.S. with an opponent they should beat. (Thailand is 33 rungs down the FIFA World Rankings from the Americans, and they have a string of five losses in recent international competition including World Cup teams France, Nigeria, and Italy.) But the Chaba Kaew does bring considerable international experience to the table, debuting in the 2015 WWC and just missing out on the Round of 16.

Here’s everything you need to know to watch the United States vs. Thailand at the 2019 FIFA Women’s World Cup.

Each of the following services carries Fox, providing a one-week trial and therefore an easy way to watch U.S. vs. Thailand at the 2019 Women’s World Cup for free.

United States vs. Thailand: Why it matters

First of all: It’s the World Cup! And while the tournament’s brought some fantastic action so far, American audiences want to watch their team take the field, and they’ve waited through a soccer-packed weekend and then some to get there.

It mostly doesn’t matter how much the U.S. wins by, as a 1-0 is almost as good as a 3-0 or 4-0 win in the group stages. The 2015 U.S. team that won it all had a less than stellar group stage: winning 3-1 handily in its first match against Australia, but only managing a scoreless draw against Sweden and a 1-0 win over 10-woman Nigeria before finding a next gear in the knockout stages. But American supporters will feel better if the dynamic offense scores early and perhaps even often. Though observers have a fair idea of what lineup the Americans will come out in, it’ll be especially interesting to see how and when coach Jill Ellis uses her considerable depth—in particular, whether and when Carli Lloyd, Christen Press, and Mallory Pugh might spell expected starters like Alex Morgan, Tobin Heath, and Megan Rapinoe.

Suchawadee Nildhamrong, an American-born forward who completed her college soccer career at Cal last year, is a Thai player fans might want to keep an eye on. But for most fans in the U.S., this match is perhaps more against how the U.S. does to meet lofty expectations rather than its opponent on the field.