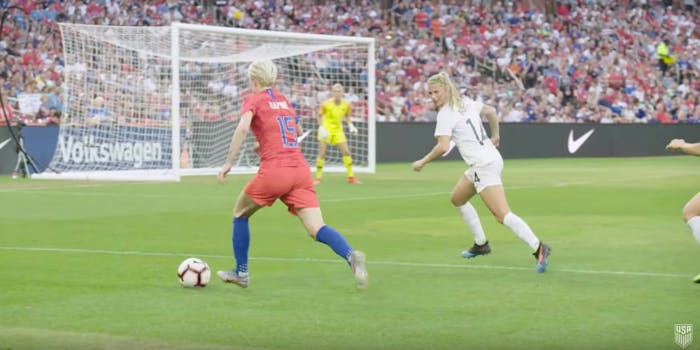 How to watch the U.S. vs. Chile at the World Cup for free

The U.S. beat Thailand 13-0 in their first World Cup outing on Tuesday. They couldn't possibly lose a match against Chile, could they?

The 2019 FIFA Women’s World Cup is well underway, and it’s the defending champs who have made the biggest splash so far. The United States opened their campaign on Tuesday with an emphatic, bombastic, record-setting 13-0 win over Thailand, which included 10 second-half goals and wall-t0-wall goal celebrations (the latter raising the ire of Canadian commentators). Star striker Alex Morgan scored five of the 13 goals, putting her in contention for the tournament’s Golden Boot, and by the match’s end, the team had shifted into an extremely attacking 3-1-2-4 formation, which pretty much makes the U.S. the Darth Vader of women’s soccer.

Now, they’ll shift their attention to Chile, which is making their World Cup debut this year.

Here’s everything you need to know to watch the United States vs. Chile at the 2019 FIFA Women’s World Cup.

Each of the following services carries Fox, providing a one-week trial and therefore an easy way to watch U.S. vs. Chile at the 2019 Women’s World Cup for free.

United States vs. Chile: Why it matters

So, there are no lingering concerns about how the U.S. came out in their first match. They definitely look up for it, and they’re playing a Chile team on the big stage for the first time who is ranked even lower than the Thailand team. The biggest concern might be karma: In racking up such a big margin against an opponent like Thailand, are they being unsportsmanlike, or are they merely playing to their abilities and therefore being more respectful by scoring seemingly at will? We may not get a good sense of this team’s ceiling until their third group match against Sweden, but until then, enjoy the goals we predict will come. It may not be 13 goals, but then again, this is a team that has multiple goal-scoring options it’s not shy about deploying.

Chile does have one factor that Thailand doesn’t have, which could help. Christiane Endler is a tall, solid goalkeeper who captains La Roja Feminina and plays her club soccer with Paris Saint-Germain. Facing the likes of the loaded Lyon team—featuring a number of the world’s best players, including the core of the French team—may prepare her for what she’ll be tasked with against the United States.