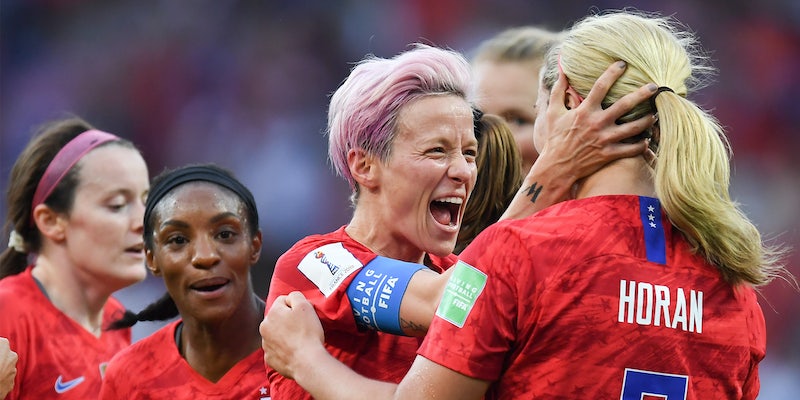 How to stream the U.S. vs. the Netherlands Women’s World Cup final for free

The Women's World Cup finals are here! Can the U.S. capture its fourth title? Or will the Netherlands play spoiler in their first title match?

The 2019 FIFA Women’s World Cup finals have arrived, and the United States easily lived up to its role as the defending champion. They’ve also done it with a meme-worthy goal celebration and an outspokenness they’ve backed up with their performance on the field. Now, they’re just one win away from becoming four-time world champs.

The Netherlands stands in their way, and while they’re not ranked as highly as the French and English teams the U.S. already beat, it’s a compelling matchup. The Dutch front three rivals the U.S. in pace and goal-scoring, and it could easily be a close game.

The United States vs. the Netherlands

If you want to watch the Women’s World Cup live stream for free, there are some options. Each of the following services carries Fox and provides a one-week trial. Sign up for a trial and cancel within the week and you’ve got yourself easy access to the U.S. vs. the Netherlands game.

Sling TV provides two base channel package options, each priced at $25 per month. Sling Orange includes three ESPN channels, while Sling Blue includes sports channels like NFL Network, FS1 and FS2 (where much of the Women’s World Cup action has played out), NBCSN, and local channels including Fox (where this match will be broadcast). If you want both, Sling Orange + Blue combines the two for just $40 per month. To add beIN SPORTS and maximize your soccer-watching potential, you’ll want to add either Sports Extra: Sling Orange ($5 per month) or Sports Extra: Sling Blue ($10 per month). (The latter also includes NFL RedZone.)

Spanish-speaking viewers have options as well. For bilingual families, you might consider the Español: Best of Spanish TV package for either Sling Orange or Sling Blue for 24/7 specialty channel LaLiga TV and beIN SPORTS Connect: Channels 4-9, which features matches from LaLiga, Ligue 1 and Copa del Rey, among others. Both packages cost $5 per month after your free trial. Sling TV Latino is another Spanish-language package for $10 per month, and it includes NBC Universo, History en Español, and—of import to soccer fans—four beIN SPORTS channels. (And choosing Sling TV Latino + Sling Orange for $30 per month gives you access to ESPN Deportes.) For more information, check out our guide to Sling TV channels and our Sling TV review.

FuboTV is a solid TV streaming service option, whether you’re looking for entertainment (AMC, Syfy, FX), news (MSNBC, CNN), or sports (NBA TV, NFL Network). If you’re a soccer fan, however, you really get the most out of the service, which offers 10 beIN SPORTS channels, NBCSN, FS1, FS2, UniMás, and Champions League action via TNT all on tap. And it’s streaming the Women’s World Cup in 4K. If you can’t watch a match live, FuboTV offers a three-day replay for each match and 30 hours of cloud DVR. (Check out the complete FuboTV channels list and our FuboTV review.)

FuboTV also has bilingual families in mind: Each subscription comes with UniMás, Galavisión, NBC Universo, beIN SPORTS, Univision, and Fox Deportes. An extra $7.99 per month will bring you Latino Plus, which includes CNN en Español and TyC Sports among its offerings.

PlayStation Vue is a fantastic option for soccer fans who already own a PlayStation console, but this streaming platform is available on a variety of devices. FS1 and FS2, where the bulk of Women’s World Cup coverage has played out, are part of the Core package of channels that offer soccer and other sports programming, and the options increase at the Elite and Ultra levels.

Hulu with Live TV includes sports programming among its offerings, and as a subscriber to the service, you’ll get free access to Hulu’s sizable on-demand library. (Check out the full list of Hulu Live TV channels.)

The United States vs. the Netherlands: What to watch for

Though the U.S. came into the tournament with a strong offense that’s delivered throughout the tournament—starting with a record 13 goals against Thailand—the key to victory lies with the U.S. back four. They’ll have to control one of the better offenses they’ll face in this World Cup, watching for outside backs Kelley O’Hara and Crystal Dunn and dueling wingers Lieke Martens and Shanice van de Sanden. The defense will also need to pay special attention to Becky Sauerbrunn and Abby Dahlkemper and work against Vivianne Miedema, the Netherlands’ prime scoring threat. Goalkeeper Alyssa Naeher had perhaps the best save of the tournament in the semis against England, stopping a penalty kick that would have tied the game with just minutes remaining,and  she may have to come up big yet again.

The midfield battle will also be compelling. Julie Ertz and Lindsey Horan are key to the U.S. transition from defense to offense, and on the Netherlands’s side, look for Danielle van de Donk and Jackie Groenen and how they’re able to support the front three. And if the Oranj win a free-kick, Sherida Spitse will likely take it, and if you’re rooting for the U.S., that should worry you.

While there’s some concern about Megan Rapinoe’s hamstring, the team is still deep enough offensively if they need to go without her. Look to the semifinal performance of Christen Press, Alex Morgan, and Tobin Heath for evidence of that. Carli Lloyd will likely make an appearance in what could be her final World Cup match, and though Mallory Pugh and Jessica McDonald have only made brief appearances, they’re waiting if the U.S. needs a sudden, late burst of energy.