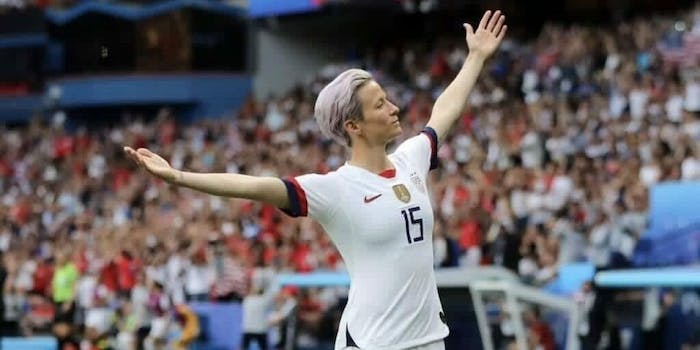 It’s no secret that Megan Rapinoe has no problem letting her emotions show on the field, and the forward for the United States women’s soccer team certainly has a lot to feel emotional about right now. Her team just defeated France to advance to the semi-finals of the FIFA World Cup, and she’s tied with teammate Alex Morgan for most goals scored during the series (each woman has five).

But it’s one particular pose that has captured the attention of the internet: Rapinoe with open arms and a self-assured smile after scoring a goal. People are using it to create memes where they talk about their own, perhaps slightly less notable, victories.

when I get my inbox down to ten emails pic.twitter.com/yvBoAXZErA

Me when I boil water and cook pasta instead of ordering delivery. pic.twitter.com/iN1gl0ZKRy

when i do my core workout pic.twitter.com/eF3FpawVsK

when i place my order at wingstop pic.twitter.com/EjudouVQxz

When I do the easiest task on my to-do list pic.twitter.com/fTvrXoZYXB

Some people even found the pose reminiscent of other inspiring figures.

“You’re sort of on the stage, so I guess I’m looking at myself as a performer and trying to entertain,” Rapinoe told ABC News when asked about her instantly iconic stance “It’s sort of a funny playful pose and we’re always looking for good celebrations so this one stuck a little.”

Hopefully, we’ll be seeing more of the now-famous pose on Tuesday, when the United States takes on England in the semi-finals. The match kicks off at 3 pm ET.
READ MORE: