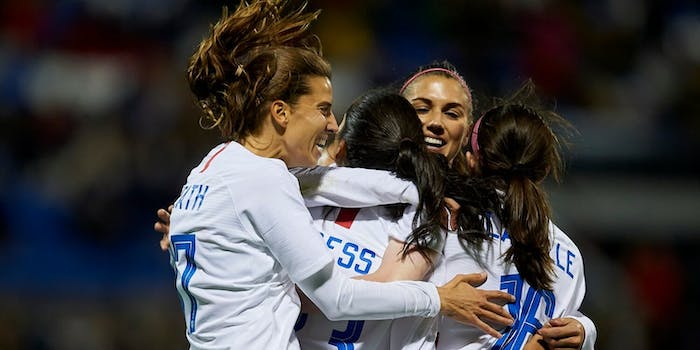 How to watch the U.S. vs. France at the World Cup for free

Consider this the 2019 Women's World Cup's first final: It's arguably the two best teams in the tournament, fighting for a semifinal birth.

When the draw for the 2019 FIFA Women’s World Cup was announced, many predicted what has indeed happened: France would win Group A, the U.S. would win Group F, and the two teams perhaps most likely to win the tournament would meet in the quarterfinals. Our advice is not to despair that this isn’t the finals, but to consider this the first of two finals, with the actual finals coming Sunday, July 7.

France enjoys an advantage as tournament hosts. They also have players that rival the rest of the world in sheer talent, and seven of their usual 11 starters play for the same club team. They’re formidable, but then again, so is the U.S., who looked more vulnerable than usual in their 2-1 Round of 16 win over Spain on Monday. But the U.S. still has outpaced their opponents 20-1 in their four matches.

U.S. midfielder Megan Rapinoe, a quite quotable vocal leader on the squad, declared that this should be and would be a “total shitshow circus” featuring two watchable teams and amped-up fans—and she’s absolutely right. This match has the potential to be not only the best match of this World Cup but the best women’s match of all time. The teams are that good, and the spotlight is just that bright.

Here’s everything you need to know to watch the United States vs. France at the 2019 FIFA Women’s World Cup.

Each of the following services carries Fox, providing a one-week trial and therefore an easy way to watch U.S. vs. France at the 2019 Women’s World Cup for free.

United States vs. France: Why it matters

Again, to quote Megan Rapinoe: “Total shitshow circus.” France has a stellar defensive anchor in Wendie Renard (who is 6’2″!), a cadre of talented scorers (especially Eugenie Le Sommer and Delphine Cascarino), and a ball-winning defensive midfielder and emotional leader in Amandine Henry—who all happen to play their club soccer at Lyon, which is currently the best all-around women’s pro team in the world. If not for the United States and their recent dominance, the French team would be the outright favorites to win the World Cup, and plenty of people out there think they’ll overcome the Americans and join their male counterparts who won it all last year.

Questions aplenty emerged from the U.S. win over Spain on Monday: Alex Morgan didn’t score. The offense didn’t seem to get going, certainly not to the high-octane level achieved in the group stages. Coach Jill Ellis had some odd substitutions—Carli Lloyd got on the field a lot later than a lot of fans would have liked, and Lindsey Horan was subbed in very late—risking a yellow card that would have excluded her from this match had she picked one up.

Clearly, both teams will be up for this match, and though soccer is unpredictable — and this is the type of match that can be tense and tentative given its gravity — expect fireworks. Both teams know how to rise to the moment, and they’re not the type to hold back.