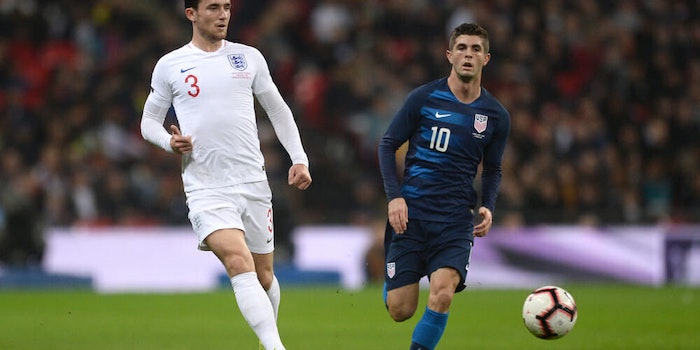 How to watch the U.S. vs. Curacao at the Gold Cup for free

The U.S. battles a small Caribbean nation that's been a surprise of the tournament.

The U.S. men’s national team has done what it’s needed to do at the 2019 CONCACAF Gold Cup. It’s won all three group stage games, hasn’t allowed a goal, and scored 11 of its own—ranging from artful team goals to the shot that Paul Arriola bounced off Gyasi Zardes’ face. Now, it’s onto the knockout stages; the initial field of 16 has been winnowed to eight, as teams start the progression toward the July 7 final. It’s setting up for a U.S.-Mexico final, though there are certainly challengers looking to insert themselves into the narrative.

One of the most surprising challengers, Curacao, faces the U.S. in the quarterfinals on Sunday. In group matches, Curacao lost to El Salvador but upset Honduras and salvaged a draw against group-winners Jamaica with a late wonderstrike, allowing the upstarts to finish second. Their reward is a match against the hosts and a few additional days in the U.S. while higher-ranked teams head home.

Here’s everything you need to know to watch the United States vs. Curacao at the 2019 CONCACAF Gold Cup.

Each of the following services carries FS1, providing a one-week trial and therefore an easy way to watch U.S. vs. Curacao at the 2019 Concacaf Gold Cup for free.

Sling TV provides two base channel package options, each priced at $25 per month. Sling Orange includes three ESPN channels, while Sling Blue includes sports channels like NFL Network, FS1 and FS2 (home to much of the Gold Cup action), NBCSN, and local channels. If you’re Team “Why Not Both,” Sling Orange + Blue combines the two for just $40 per month. To add beIN SPORTS and maximize your soccer-watching potential, you’ll want to add either Sports Extra: Sling Orange ($5 per month) or Sports Extra: Sling Blue ($10 per month). (The latter also includes NFL RedZone.)

FuboTV is a solid TV streaming service option, whether your tastes run to entertainment (AMC, Syfy, FX), news (MSNBC, CNN), or sports (NBA TV, NFL Network). If you’re a soccer fan, however, it will appear tailor-made for you, with 10 beIN SPORTS channels, NBCSN, FS1, FS2, UniMás, and Champions League action via TNT all on tap. For the Women’s World Cup, it’s especially strong, promising to stream each match in 4K. If you can’t watch a match live, FuboTV offers a three-day replay for each match and 30 hours of cloud DVR. (Check out the complete FuboTV channels list and our FuboTV review.)

PlayStation Vue is a fantastic option for soccer fans who already own a PlayStation console, but this streaming platform is available on a variety of devices. FS1 and FS2, where the bulk of CONCACAF Gold Cup coverage lives, are part of the Core package of channels that offer soccer and other sports programming, and the options increase at the Elite, and Ultra levels.

United States vs. Curacao: Why it matters

It’s win-or-go-home time at the Gold Cup, and for the U.S. to get into the semifinals, it first has to get past a Curacao team that’s been one of the surprises of the tournament. Curacao has kept all three of its matches tight and low-scoring, and while the Americans can win those types of matches—and did most recently in a 1-0 handling of Panama on Wednesday night—they’ll feel more comfortable getting a second goal on the board while looking to keep their scoreless streak going.

It’s been a successful tournament—the U.S. has an impressive new breakout player in Tyler Boyd, had good performances from Christian Pulisic and Weston McKennie (who the U.S.’ future World Cup hopes largely hinge on), and Nick Lima’s done a stellar job filling in for first-choice right back of late Tyler Adams, sitting this Gold Cup out with injury. Still, though, the bar for success in this Gold Cup is a valiant finals loss at a minimum, so this match is merely a step along the way to the ultimate goal. A loss against a Caribbean nation with a largely obscure collection of players is certainly possible in a tournament like this, but not likely—although CONCACAF tournaments are prime landscapes for the “anything can happen” nature of soccer.