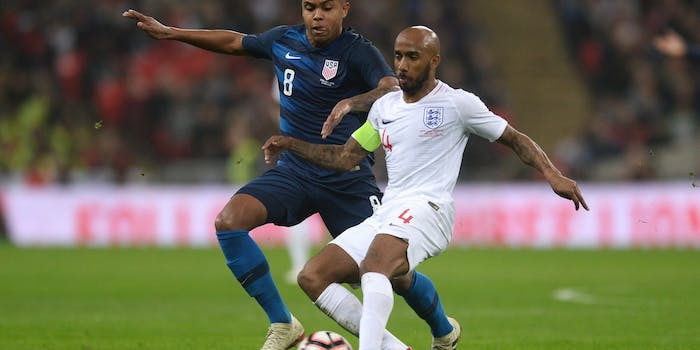 How to watch the 2019 Concacaf Gold Cup online for free

Can the United States defend its title?

The 2019 CONCACAF Gold Cup is CONCACAF’s flagship tournament. It starts June 15 and runs until the July 7 finals—a soccer-packed day that includes the Women’s World Cup finals and the Copa America finals. Though the United States and Mexico have been the dominant teams in the federation over the years, rising programs in Costa Rica, Honduras, Panama, Jamaica, and Canada have made this an action-packed tournament in recent cycles. The United States may be the defending champs, winning in 2017, but that victory was marred by the squad’s failure to qualify for the 2018 World Cup.

This tournament is seen by many as a bounce-back tournament for the team, but they’ve had some losses in recent tune-up matches that are troubling to the team’s fervent fans.

Here’s everything you need to know to watch the 2019 Gold Cup.

What is the CONCACAF Gold Cup?

Started in 1991, the Gold Cup has settled into a biennial routine, typically won the United States (six victories) or Mexico (seven victories), though Canada did break the pattern in 2000. The current edition will feature 16 teams from throughout the federation, which encompasses North and Central America, Caribbean nations, and a few South American nations on the Caribbean coast.

The tournament features four groups of four teams each. Each team plays the other three teams in its group, and the first and second place teams from each group advance to an eight-team knockout phase.

Which CONCACAF Gold Cup teams should you know?

The defending champs (known to American soccer fans as the USMNT, short for United States men’s national team) will feature some of the veterans from the team’s previous World Cup appearance in 2014, including Michael Bradley, Jozy Altidore, and Omar Gonzalez, as well as some of the rising stars who will figure into the quest for the 2022 World Cup. Keep an eye on Christian Pulisic, Weston McKennie, and Zack Steffen in particular, as the USMNT’s hopes largely ride on their performances. Tyler Adams, another key player, will stay behind due to injury, but he’ll be replaced by Reggie Cannon,  just one of a number of difference-making MLS players stepping up.

Mexico, off a recent tour in the U.S. to warm up for the competition, is missing a number of its brightest lights, but they’ll still feature a talented squad. Key players include Raul Jimenez, who has had a breakthrough season with Premier League side Wolves, Jonathan dos Santos, one of two LA Galaxy players on the El Tri roster, and Andres Guardado, the Real Betis player who currently captains the squad.

Other players of note include Alberth Elis and Romell Quioto of Honduras, who are teammates with the Houston Dynamo, Andre Blake, the excellent Jamaican goalkeeper who plays with the Philadelphia Union, and Alphonso Davies, the standout Canadian midfielder who recently made the leap from Vancouver Whitecaps FC to Bayern Munich.

When does the USMNT play in the Gold Cup?

The USMNT will play Tuesday, June 18 at 9pm ET against Guyana, Saturday, June 22 at 3pm ET against Trinidad and Tobago, and Wednesday, June 26 at 9 pm ET against Panama. Assuming they advance past the group stages, their initial knockout round match will be Sunday, June 30 (as part of a doubleheader in Philadelphia).

Games will be broadcast on Fox, FS1, and FS2, and will also be in Spanish on Univision Deportes.

Each of the following services carries Fox, FS1, and FS2 and provide a one-week trial and therefore an easy way to watch Gold Cup matches for free. (Univision will handle Spanish coverage for American audiences.)

Sling TV provides two base channel package options, each priced at $25 per month. Sling Orange includes three ESPN channels, while Sling Blue includes sports channels like NFL Network, FS1 and FS2 (where much of the Gold Cup action will be), NBCSN, and local channels. If you’re Team “Why Not Both,” Sling Orange + Blue combines the two for just $40 per month. To add beIN SPORTS and maximize your soccer-watching potential, you’ll want to add either Sports Extra: Sling Orange ($5 per month) or Sports Extra: Sling Blue ($10 per month). (The latter also includes NFL RedZone.)

FuboTV is a solid TV streaming service option, whether your tastes run to entertainment (AMC, Syfy, FX), news (MSNBC, CNN), or sports (NBA TV, NFL Network). If you’re a soccer fan, however, it will appear tailor-made for you, with 10 beIN SPORTS channels, NBCSN, FS1, FS2, Univision, UniMás, and Champions League actions via TNT all on tap. If you can’t watch a match live, FuboTV offers a three-day replay for each match and 30 hours of cloud DVR. (Check out the complete FuboTV channels list.)

YouTube TV is a great option for soccer fans, including TNT for Champions League m2w3atches, NBCSN for Premier League matches, and broadcasting partnerships with three MLS teams. (Take a look at the full list of YouTube TV channels here.)

Here’s the complete list of winners, dating back to the first Gold Cup in 1991.