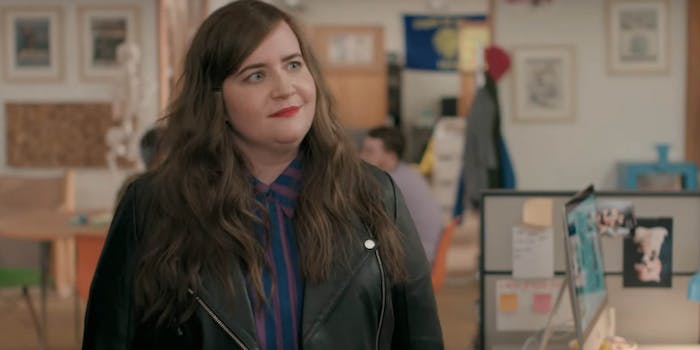 The six-episode series is loosely based on Lindy West’s 2016 essay collection Shrill: Notes from a Loud Woman; West is also co-writer and executive producer. Bryant plays Annie Easton, a calendar editor at the Portland-based Weekly Thorn, a stand-in for alt-weekly The Stranger, where West worked. Annie is a people-pleaser, but she’s also trying to assert herself more as a writer. She’s amiable, even when her flaky hook-up Ryan (Luka Jones) makes her leave out the back door so as not to embarrass him in front of his roommates. Her roommate and friend Fran (Lolly Adefope) is supportive but calls out her people-pleasing behavior. And having SNL alum Julia Sweeney as Annie’s mom is an inspired choice.

Annie finds empowerment in her writing. Sent to review the lunch buffet at a strip club by her cocky editor Gabe (an underused John Cameron Mitchell), she instead bases the piece around the women who dance there. A rogue piece titled “Hello, I’m Fat” (based on a 2011 column West actually wrote) gets positive responses, but trolls also pile on in the comments section.

Though Annie’s battle with trolls isn’t quite as encompassing as West’s was—at least not in just six episodes—it makes for a strong narrative thrust. In one memorable scene, Annie and the paper’s IT person (played by comedian Jo Firestone) look through the awful comments in an effort to hunt down one particular troll. It’s a moment familiar to many women who have been harassed for having opinions online, and the two reclaim it to show the absurdity of the comments.

Shrill is a show about being fat, but that doesn’t overpower. We don’t see dramatic weight-loss transformations or Annie’s aspirations to be thinner, but we do see the micro-aggressions. The episode “Pool” is the strongest of the six. After slowly letting her inhibitions go over the course of a body-positive pool party only to be shamed by her fat-phobic boss for missing a work event, Annie returns home and unloads to Fran and another friend. She tells them she’s constantly bombarded with ads telling her how to lose weight, and was told from a young age that being skinny would make her more likable.

“It’s a fucking mind prison, you know?” Annie says. “That every fucking woman everywhere has been programmed to believe. And I’ve wasted so much time and energy and money and for what? I’m fat. I’m fucking fat.” The show also highlights issues that women of a certain weight might not face, like the fact that the morning-after pill was not intended to work for women over 175 pounds.

While Shrill is adapted from West’s experiences, Bryant isn’t just playing her or a character. She recently told the New York Times that sometimes she has the thought that SNL only cast her because she is fat, and like her character in Shrill, she struggled with her weight growing up. At SXSW on Monday, executive producer Elizabeth Banks said Pitch Perfect served as inspiration for Shrill, in terms of giving women a character they might not see onscreen.

“This is a story I’ve always wanted to see on TV,” Bryant added. “I never quite felt like I saw myself onscreen.”

If there is a critique of Shrill, it’s that—and I can’t believe I’m going to say this in an era of too much TV—the series is a little too short. It feels like it’s only getting started, especially after Annie’s in-person confrontation with a troll. I would have liked to see a few of the relationships receive a little more structure, but I was also stoked to see women who look a little more like me onscreen.

Shrill finds itself in season 2, and shows the highs and low of wielding newfound power.

When Shrill, based on Lindy West’s 2016 book Shrill: Notes from a Loud Woman, debuted in March 2019, six episodes felt a little too short. We got to know Annie (Aidy Bryant) and her family and friends, but much of the conflict stemmed from her being a fat woman. In season 2, it’s clearer that Annie was trying to be herself and what others wanted, which is frustrating and relatable to a lot of women. Bryant tells the Daily Dot they hit their “stride” this season.

Annie tracks down and confronts her troll (Beck Bennett) in season 1’s finale, and season 2 picks up there. West did something similar with a troll who’d been harassing her and posting on Twitter as her late father, for a segment on This American Life in 2015. She saw a wave of harassment after she wrote about comedians and rape jokes in 2012, but one serial harasser actually expressed remorse when confronted.

West left Twitter in 2017, so her interaction with trolls has scaled back, but she didn’t want the on-screen confrontation to absolve the harasser. She’d been pretty “generous” with her own, but the landscape has changed since then.

“We decided to make him this rich, average corporate guy who’s mad at women and mad at his mommy and mad at his girlfriend and is taking it out on Annie in this really kind of mundane way,” West says. “I think that’s what’s actually really chilling about internet trolls is that they are just, like, people you know, and they’re inflicting really extreme damage on the world.”

Bryant wrote the first episode, in which she takes off into the woods with boyfriend Ryan (Luka Jones) after confronting her troll. The phrase “two-day pussy” is featured, and though many women know exactly what that means, Bryant says it’s more of an homage to her time at Second City, where she’d often have to do two shows a night. She and a friend would “gauge” where they were by saying, “I’ve got a two-show pussy on a one-show night.”

Bryant grew up in Phoenix, Arizona, and started doing improv and theatre in high school, but there wasn’t much of a comedy scene there: It was very “blonde.” She moved to Chicago for college and found Second City, which eventually led to her SNL audition. In her time at SNL, Bryant was often offered roles that weren’t exactly empowering. She read West’s book when it was released, then randomly saw that Elizabeth Banks had optioned it. She put in a call to her agents, who told her Banks had already inquired about her for the role. But Bryant gets to use a different muscle here than SNL: “[Shrill] is about the long game and the arc of the story, and [SNL] is so immediate and about making it funny now and getting it done as fast as you can.”

One major season 2 arc is an expanded view of Fran, Annie’s bestie and roommate, played by Lolly Adefope. She describes Fran as “unapologetic, confident, sexy, everyone loves her,” but she’s also a serial dater and in season 2 has to figure out how to be alone after having her heart broken. This is beautifully illustrated in a scene in which she gets high, then walks into a bar to belt out “Shallow,” her “go-to karaoke song.”

Adefope grew up in the U.K. and got her start in comedy doing characters, like a guy who’s teaching the audience to be “politically correct” and a woman doing standup for the first time. Fran’s a character, but Adefope imbues her with her own chemistry.

“I think Fran is more confident than me,” she says. “… But I think I’m probably more able to be vulnerable than she is.”

She gets a lot of messages from people that love and relate to Fran, a testament to her transcendence of the “best friend” role. This is crystallized in one of the season’s best episodes, written by comedian Solomon Georgio, in which Fran clashes with her mother over her life choices at her cousin’s wedding. A Nigerian wedding planner advised on the staging and Adefope had input into “some of the dialogue between Fran and her mom and Fran and her aunts, just based on experiences I’ve had with the way you should treat your elders, and the way you actually want to speak to them.”

In an episode directed by Natasha Lyonne, Annie covers WAHAM (Women Are Having a Moment), a pink-hued empowerment rally for (mostly white) women. “Orgasms are self-care,” says one small businesswoman selling $150 vibrators. While there’s much to parody in the era of Goop feminism, there are women who are looking for that kind of community, and they wanted to show both sides.

“It’s boring to just dunk on people,” West says. “Especially on people who are searching for something.”

There’s a more expanded view of The Weekly Thorn, the Portland alt-weekly where Annie works. West says it’s “almost sci-fi” that Annie works at an alt-weekly that doesn’t appear on the verge of going under, since they have all but disappeared and the “rude press” sold off for parts. In season 2, editor Gabe (John Cameron Mitchell) gets more of a personality beyond being fatphobic; he has a moment of self-actualization and does push Annie to be a better writer, especially on the WAHAM piece. Sheila (Illeana Douglas), the Thorn’s publisher, is brought in as a mentor of sorts—and to show how the paper is actually still afloat.

Season 2 also gets more comfortable as an ensemble show: Patti Harrison continues to steal every scene she’s in as co-worker Ruthie, and a song she sings at her birthday party is a season highlight. Comedians Jo Firestone, Joel Kim Booster, Sam Jay, Gary Richardson, Conner O’Malley, and Carmen Christopher also feature, and West says that having this collection of talent on the show is a fitting “epilogue” to years of debate with “white comedy boys” who couldn’t fathom that anyone other than straight white men are funny.

“It’s so gratifying to me to see the way that the industry has opened up,” she says, “and how right we were about that.”