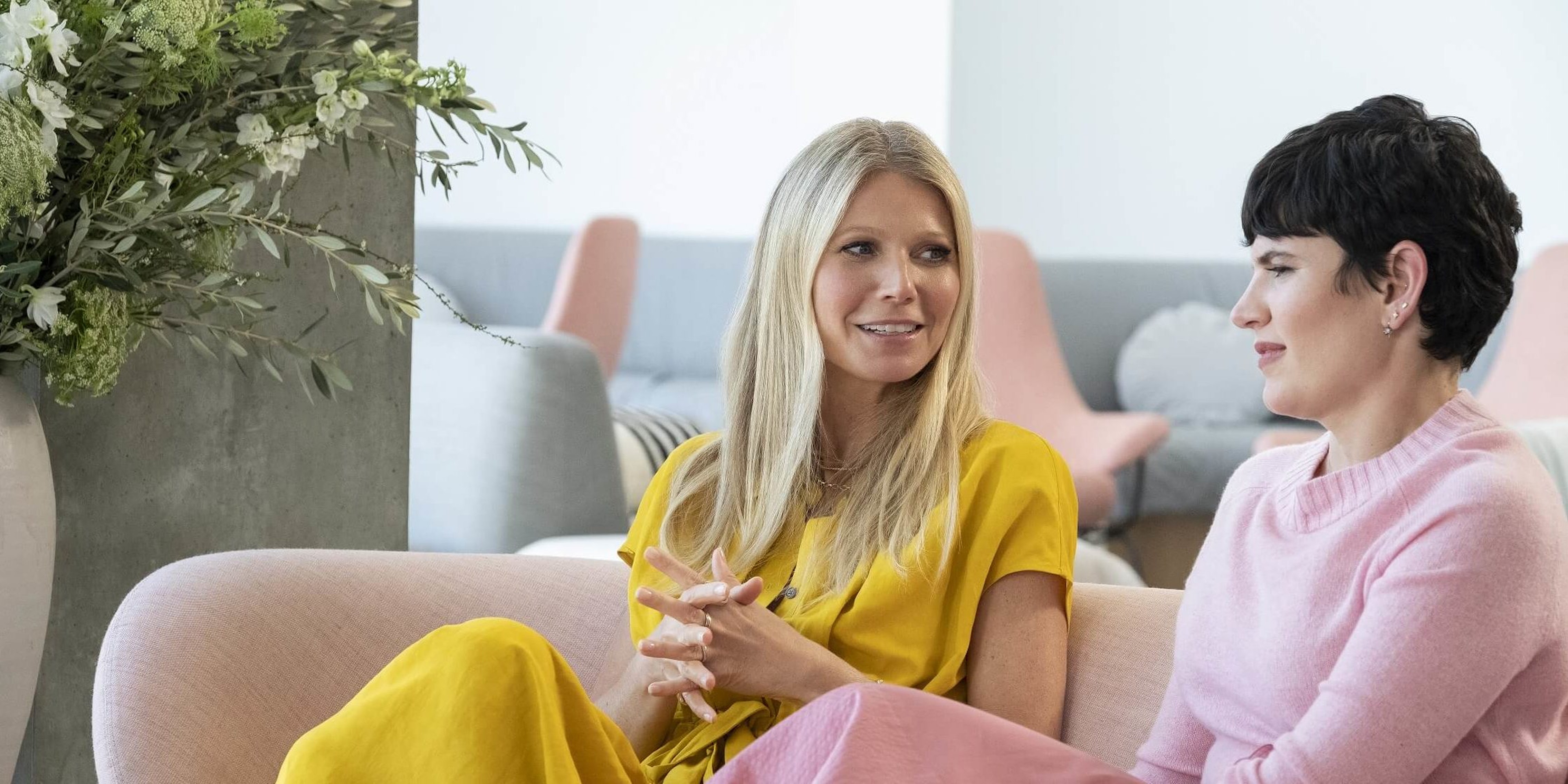 The new 'documentary' series mostly acts like an ad for Paltrow's lifestyle brand.

Gwyneth Paltrow’s lifestyle brand, Goop, is synonymous with a certain type of kooky Hollywood excess. Launched in 2008 as an email newsletter, it’s now a retail/media empire peddling luxury products, New Age wellness advice, and a web of dubious collaborators ranging from celebrity fitness trainers to spiritual healers. Exhibiting an aggressively open-minded attitude to pseudoscience, Goop has been criticized for working with AIDS deniers and offering dangerous diet advice. But if you’re not an assiduous Paltrow follower, you may only know about the jade vagina eggs.

To a longtime Goop spectator, the jade eggs felt like a turning point for the brand’s public image. “Gwyneth Paltrow wants you to shove a $55 rock up your snatch” is an irresistible kind of celebrity news story, and while it led to widespread mockery and a lawsuit, it was effective publicity. Over the last couple of years, Paltrow’s public image has grown funnier and more self-aware, peaking with her role in Netflix’s The Politician. Co-created by her husband Brad Falchuk, the show cast Paltrow as a loving parody of herself: a charmingly out-of-touch millionaire with quirky spiritual beliefs. The Goop Lab, her new documentary series, arrives with a similarly tongue-in-cheek tone: a poster showing Paltrow in front of a stylized vulva, with the tagline “Reach New Depths.” At the same time, Goop advertised (and promptly sold out of) a candle titled “This Smells Like My Vagina,” prompting a flood of headlines about Gwyneth’s wacky behavior, as if this whole thing wasn’t a marketing stunt. (The Goop webstore doesn’t actually say the candle smells of vagina; it’s all bergamot and geranium or whatever.) Considering all this, I suspect The Goop Lab will attract just as many derisive hate-watchers as genuinely curious viewers.

Gwyneth Paltrow is very much in on the joke here, and she’s laughing all the way to the bank. Even by writing this review, I almost feel like a participant in the Goop publicity machine, bolstering an empire of luxury products and unreliable wellness services. The Goop Lab is a direct continuation of the Goop newsletter formula, framed as a documentary series where each episode focuses on a different topic: psychedelic drugs, sex therapy, energy healing, anti-aging diets, and so on. Paltrow and Goop’s Chief Content Officer Elise Loehnen are the main presenters, accompanied by a stable of photogenic Goop employees.

I didn’t go into Goop Lab expecting rigorous fact-checking, but it’s still frustrating to imagine people viewing these segments as meaningful scientific experiments. Mostly, the show is about Goop employees sampling products, whether that product is cosmetic surgery or a new wellness “modality.” Emotional openness is a central tenet of that experience. The test subjects are primed to make these products and techniques work, because the Goop offices are populated with credulous New Age millennials who already love alternative therapies. It’s a workplace environment where the lone skeptic is embarrassed to admit she doesn’t believe in psychics.

The episodes on energy healing and psychic mediums are really one of those “you’ll either believe it or you won’t” situations, but the one that irritated me the most was actually episode 2, a half-hour advertorial for Wim Hof, a Dutch man who touts the health benefits of extreme cold exposure. Featuring a bikini-clad field trip to the icy Lake Tahoe, the episode accepts everything Wim Hof says at face value. Some of it is perfectly reasonable, like the fact that jumping in cold water can make you feel good, creating a rush of endorphins and blood flow. Anyone from a cold climate can tell you that, with ice-swimming and hot/cold saunas being popular throughout Northern Europe.

Holding numerous world records for cold exposure, Wim Hof has made a career out of submerging himself in ice baths and promoting his Wim Hof Method, which combines breathing exercises (similar to some pranayama yoga techniques) with exposing the body to extreme cold. Hof has participated in many publicity-grabbing experiments and a few actual scientific trials, and he’s a more complicated and controversial figure than Goop Lab suggests.

There’s some evidence that Wim Hof’s techniques may help to boost certain immune responses, and we already know from centuries of experience that people can benefit from meditative breathing exercises and sauna-style exposure to cold. The problems begin when Hof (and by extension Goop) start to attach ambitious, unproven medical benefits to these practices. Hof, an energetic self-publicist, enthusiastically suggests that his method can combat inflammation, psychosis, depression, and anxiety. On his website, he claims to reduce symptoms of “rheumatoid arthritis, multiple sclerosis, Parkinson’s disease, asthma, sarcoidosis, vasculitis, and several autoimmune diseases.” He also tosses in an unexamined statement about making the body “more alkaline,” a timely buzzword tying into a current wellness fad, alkaline dieting. You barely have time to ask, “alkaline what now?” before we move onto the next exaggerated claim.

Goop’s credited “research scientist,” a man with an M.S. in sports nutrition, fails to question any of this. His main role is to join some other Goop employees in jumping into Lake Tahoe and doing calisthenics in the snow. There’s little discussion of potential risks, aside from one brief comment: While guiding the group through their hyperventilation exercises, Wim Hof tells them not to try it in a swimming pool. This may be a tacit reference to the four deaths that have been linked to the Wim Hof Method, all reportedly occurring under similar circumstances: people doing unsupervised hyperventilation exercises in or around water, then passing out and drowning. Wim Hof’s website makes it clear that controlled hyperventilation should only be practiced on dry land, but Goop Lab doesn’t complicate a feel-good story by digging into any of this. The episode ends with a Goop employee saying that jumping into Lake Tahoe was a transformative experience (an extremely Los Angeles statement), with no follow-up interviews to see if that was actually the case.

Several times during this six-episode season, I found myself thinking about Jane Marie’s excellent documentary podcast The Dream, which is currently investigating the American wellness industry. With a sympathetic eye to true believers, the podcast draws connections between America’s disastrous healthcare system and the popularity of alternative medicine, along with the total lack of regulation for dietary supplements and wellness products like essential oils. Women are particularly susceptible, partly due to the prevalence of sexism in traditional medicine, and partly because there’s a colossal industry of health and beauty products capitalizing on women’s insecurities.

Among the diverse cast of Goop staffers, the show mostly focuses on women who hope to solve their problems – anxiety, trauma, the aging process – using “alternative,” often supernatural methods. Radical vulnerability is key, utilizing the ever-popular reality TV trope of people weeping in front of their friends and coworkers, neatly edited to give each episode a satisfyingly cathartic ending. We’re left with the impression that someone’s ingrained emotional issues have been solved by (for example) having a man wave his hands through their “energy” above a massage table. There’s little acknowledgment of the placebo effect, or the power of sharing intense emotional moments on camera, among a crowd of other believers.

As a documentary series, Goop Lab is shoddy and irresponsible. But at the same time, I can’t deny it’s entertaining. The episodes are only 30 minutes long, and there’s an undeniable draw to seeing Gwyneth Paltrow, a genuine A-lister, appear in this kind of role.

Paltrow’s personal appeal is central to Goop’s success, in ways I both do and don’t understand. On the one hand, it’s fascinating to see a very famous person discuss their body and personal life, and Paltrow is delightfully charming and funny, with a practiced talent for cute reaction shots. On the other hand, she kind of undercuts her own mission. According to Gwyneth, the whole point of Goop is to help people optimize their lives and bodies. But Gwyneth seems to spend all her time doing complicated wellness stuff, to the point where it seems exhausting and counterproductive. It’s hard to see how this is aspirational.

The most telling moment comes when a scientist uses blood tests to calculate the “biological ages” of several Goop employees including Paltrow. According to the test, their bodies were only a year or so younger than their actual chronological ages (whatever that means), leading me to wonder… if these ladies aren’t already supernaturally youthful, then what’s the point? Their full-time job revolves around extreme diets, Tracy Anderson exercise classes, and exorbitant beauty fads like vampire facials. And they basically just admitted it didn’t make a difference! They still have the bodies of typical (albeit wealthy) middle-aged women! Even Gwyneth has totally normal wrinkles for a 46-year-old, and her slim physique is the result of grueling diets and workouts that most people can’t possibly achieve. So perhaps this whole wellness experience is less about effective results than it is about hobbies and rituals and beliefs. How fortunate that those beliefs are so lucrative, with Goop’s most recent valuation listing it as a $250 million dollar company.

The Goop Lab arrives on Netflix on Jan. 24.