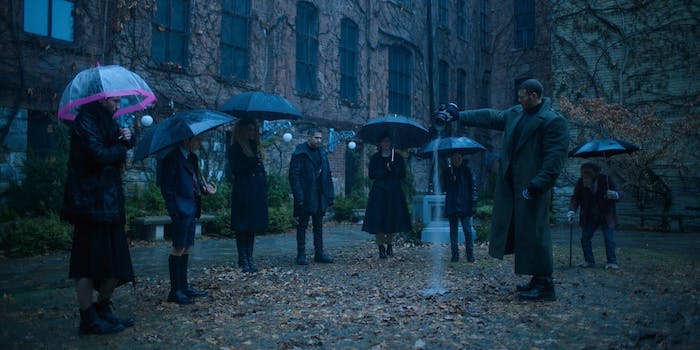 This witty and stylish family drama is the superhero version of 'The Haunting of Hill House.' A surefire hit for Netflix.

Netflix’s The Umbrella Academy is the best new comic book show in ages. It’s a chaotic family drama with all the style of Legion or Preacher—but a great deal more substance.

Adapted by Steve Blackman from the comic by Gerard Way and Gabriel Bá, Umbrella Academy has more in common with The Haunting of Hill House than with your average superhero movie. Using the framework of superhero origin stories, the show explores the kind of themes you usually see in indie dramas. The main characters are a squad of super-powered siblings who were adopted at birth by an eccentric billionaire. He trained them to be celebrity crime-fighters with dorky costumes and merchandise, but as adults they’ve drifted apart, distancing themselves from their weird childhood and abusive, unfeeling father.

Ellen Page is the big name star, playing the only non-powered sibling Vanya. But honestly, the entire ensemble cast is phenomenal. When we meet them as adults, only one of the siblings is still a superhero: Diego (David Castañeda), a Daredevil-esque vigilante. The rest are busy with their own issues.

Klaus (a twitchy, mesmerizingly eccentric Robert Sheehan) self-medicates to block his ability to see ghosts. Allison (Emmy Raver-Lampman) is a famous actress with a disastrous personal life, shaped by her ability to make any lie come true. The hulk-like Luther (Tom Hopper) is the one kid who remained loyal to their father, but for some reason, he now lives alone on the moon. Finally, there’s Number Five (Aidan Gallagher), a time-traveler who went missing when they were kids and returns to warn them about the impending apocalypse.

The Umbrella Academy is ostensibly about superheroes trying to save the world, but they’re so caught up in personal conflicts that very little world-saving takes place. Usually it’s frustrating when TV shows hang their whole plot on characters failing to communicate, but in this case, it’s a perfect fit. If the unreliable motor-mouth Klaus discovers a key piece of information, why would his siblings listen to him? He’s high all the time, he constantly monologues for his own amusement, and occasionally he’s just holding half a conversation with an invisible dead person. At the other end of the scale, Vanya has no motivation to tell anyone anything because she has abysmal self-esteem and resents her superpowered siblings for excluding her. And they’re all terrible at discussing their feelings because they were raised by a robotic Stepford Wife, a super-intelligent chimpanzee, and a rich asshole who hated kids.

The whole chimp/robot/man-on-the-moon situation tells us what to expect within the first few minutes of the show – a rare pilot episode that’s both attention-grabbing and steers clear of explaining itself too much. Umbrella Academy embraces its comic book origins, balancing cartoonish worldbuilding and visual flourishes with a sincere emotional arc. The overall vibe is a lot like an adult version of Netflix’s Series of Unfortunate Events. Larger-than-life costumes and production design create a timeless setting (this is another contemporary show without cell phones or the internet), with fantasy antics offsetting a serious exploration of family trauma.

All this talk of abuse and family conflict makes The Umbrella Academy sound overly intense and miserable, but in fact, it’s very funny. Robert Sheehan’s camp, energetic-yet-damaged performance is a highlight, along with Tom Hopper building on his Black Sails role as a stoic straight man surrounded by egomaniacs and lunatics. (At least, that’s how Luther sees himself. In reality, he’s just as screwed up as his siblings.) Then we have the antagonists Cha-Cha (Mary J. Blige) and Hazel (Cameron Britton), which is where the Preacher comparisons really come into play.

Cha-Cha and Hazel are a homicidal version of the Men In Black: a pair of suit-wearing agents with no scruples about torturing or killing anyone who gets in their way. Their scenes are uniformly silly, bickering over their expense budget like office drones before donning a pair of cartoon animal masks when it’s time to get violent. Often accompanied by bold soundtrack choices, this flavor of stylish callousness has trickled down from Quentin Tarantino films to find a regular place in comic book adaptations like Kingsman and Deadpool.

It’s easy to win people over by playing an incongruously cheery pop song over a bloody fight scene, but these days it’s kind of low-hanging fruit. Preacher spent too much time combining extreme violence with cute aesthetic choices, whereas Umbrella Academy balances its flashy montages with well-plotted, tightly written drama. Hazel and Cha-Cha’s casual cynicism offers a fitting opposite to the heroes’ deep emotional wounds and inability to focus. And in general, the show’s music choices feel more organic than just hitting the play button on a Queen track and expecting nostalgia to do the work. With a couple of delightful dance sequences and a main character whose life revolves around music (Vanya is a violinist), you can kind of tell that Umbrella Academy was originally created by a bona fide rock star.

With a compelling cast and a refreshingly unpredictable plot, Umbrella Academy blows most comic book shows out of the water. The superhero genre is obsessed with origin stories, but what is an origin story if not a simplified version of every family drama: “They fuck you up, your mum and dad.” This show just goes deeper than most. Instead of using childhood trauma as the motivation to become a hero, it explores how parental issues actually get in the way of these characters fulfilling their heroic destiny.

The Umbrella Academy arrives on Netflix on Feb. 15.