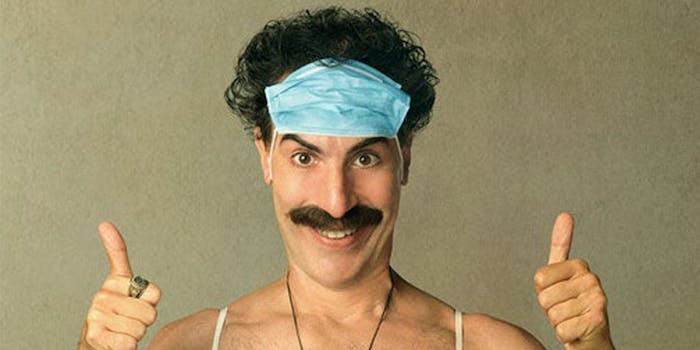 How to stream ‘Borat 2’ online for free

Few Americans knew close to nothing about the Eastern European nation of Kazakstan, and frankly, they still don’t. But Sacha Baron Cohen’s 2006 mockumentary epic Borat became an instant classic. Borat 2, aka as Borat Subsequent Moviefilm is a welcome surprise to a world looking to laugh.

The man who made “My wife” an everyday saying is back in the states, and this time, he’s brought his 15-year-old daughter Tutar (played by Maria Bakalova) with him. Together, they will trek the country from coast to coast and discover even more about our country in the midst of a pandemic and the 2020 elections. Similar to the first Borat movie, Cohen kept Borat 2 a secret as he filmed scenes in the U.S. and overseas.

The embargo on the movie dropped Wednesday and already has Trump’s personal lawyer Rudy Giuliani caught in a controversial scene with his hands literally in his pants. And that’s only what we know about the movie so far, so it’s sure to cause a stir once the whole thing releases.

Here’s everything you need to know to stream Borat 2.

What is Borat Subsequent Moviefilm?

How to stream Borat 2 for free

Borat Subsequent Moviefilm is an Amazon Prime exclusive, so it’s the only place you’ll be able to watch Borat 2. You can also catch the original Borat film with a Prime subscription.

Amazon Prime Video is one of the most popular streaming services available. It comes complimentary with every Prime membership. If you’re addicted to 2-day shipping and binging TV shows, it’s one of the best-streaming destinations. There are plenty of other exclusives that make having access to the library worth having, including Good Omens, The Man in the High Castle, The Marvelous Mrs. Maisel, Transparent, and The Tick.

You can sign up for a 7-day free trial, so that’s the only way to watch Borat 2 for free. If you’re a student, you can get six months free before you commit for the rest of the year.