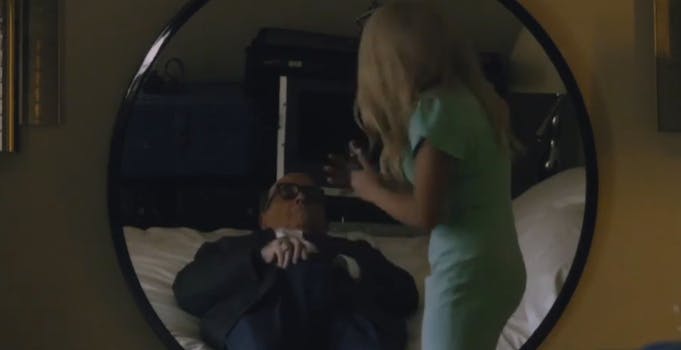 Rudy Giuliani has a very compromising scene in ‘Borat 2’

Last night, President Donald Trump’s personal lawyer, Rudy Giuliani, made the bold and unsubstantiated claim that Hunter Biden engaged in a sexual relationship with a 14-year-old.

The evidence was thin. But remove Hunter Biden from the equation and you might have something more accurate in that sentence. And it might explain why Giuliani was ranting about it.

Today, the embargo for Borat 2 (aka Borat Subsequent Moviefilm) dropped, and it’s got a doozy of a scene. In it, Giuliani is filmed on a bed while Borat’s 15-year-old daughter, Tutar (played by Maria Bakalova, who, according to IMDb, is 24 years old) stands nearby.

Tutar sets up an interview with Rudy Giuliani. She meets the former mayor of New York and current adviser to the president in a hotel room, where he holds her hands, compliments her appearance, and follows her to the bedroom. She spends some time elaborately taking off their microphones; briefly, he lies down on the bed. His hand is in his pants. Watching it, your brain turns into an exclamation point. They are strategically interrupted before more transpires, but you cannot help wondering exactly what Giuliani may have done next.

Giuliani and Tutar are interrupted by Borat, who says, “She’s 15. She’s too old for you.”

According to the Daily Dot’s Audra Schroeder, who is reviewing the film, in the scene, Tutar does not explicitly mention her age before Borat interrupts them. But nevertheless, it’s a damning position for the president’s current personal lawyer to be put in, especially as he rants about pedophiles in the Democratic party.

It’s possible that it is all, as they say, projection.