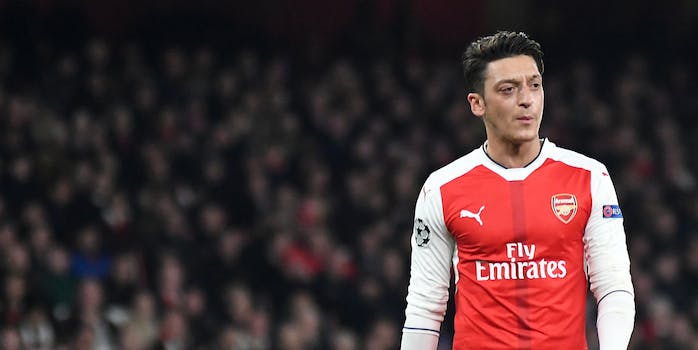 How to watch Arsenal vs. Liverpool online for free

Don't miss the biggest EPL game of the week.

The Premier League is back in a big way this weekend, and the marquee game is scheduled right when the American public is running errands. All eyes are on Arsenal and Liverpool this Saturday at 1:30pm ET, where Jurgen Klopp’s men are looking to extend their unbeaten league run to 11 matches. Whether you’re out at the store or cleaning the house, here’s what you need to know to watch the Arsenal vs Liverpool live stream.

Arsenal vs. Liverpool: Why it matters

Things are looking up at the Emirates, where the Gunners have won 11 of 12 across all competitions. But having been smacked by the two best teams they’ve played in the league, this is a huge statement game for Arsenal. Liverpool is zeroing in on winning a title this season, so a win for Arsenal proves the rebuilding team is no pretender.

For Liverpool, it’s business as usual. Klopp has fine-tuned this team for a title push. The Reds haven’t always played at their best but are finding ways to get Premier League wins.

This game no doubt poses a tactical question for him. Arsenal has been a breeze for this Liverpool team due to the open, attacking nature of both teams. Liverpool is unbeaten in five head-to-head games and has scored three goals every time against Arsenal. Will the Reds stay with their recent, more practical attacking style or go guns blazing like this matchup so often is?

Either way, this game is guaranteed to be entertaining. Liverpool comes in with a deadly front trio of Roberto Firmino, Sadio Mane, and Mohamed Salah, who are on an even better goalscoring pace than this time last year. Arsenal has plenty of attacking talent and the relationship between Alexandre Lacazette and Pierre-Emerick Aubameyang has done wonders for their buildup play. The player to watch is Lucas Torreira for Arsenal—the 22-year-old Uruguayan is the key to the midfield and shutting down the Liverpool pressing system. Both teams will be out for the win, so I think we see multiple goals and Arsenal squeaking out a draw at home.

Not only do all of the major live TV streaming services carry NBCSN, but they all also offer a one-week free trial. So if you’re looking for an Arsenal-Liverpool live stream, you’ll have no trouble finding one with the options below.

Odds are soccer is one of the last things you associate with Hulu, but Hulu with Live TV offers all the big American sports networks as well as the soccer favorites such as FS2 and Telemundo. The biggest perk of all is that it comes with a Hulu subscription, and the combination of that with the live streaming capability makes it an incredible deal. (Here’s the complete list of Hulu Live TV channels.)

If you are looking for the future of TV, look no further than Sling TV. With three different packages, you can choose which channels best suit you, which seems like something TV should have always been doing. Soccer fans should note that the best option for streaming sports is either the Sling Blue or Sling Orange + Blue package, and you’ll likely want the Sports Pack add-on. (Here’s a complete guide to Sling TV channels.)

FuboTV is one of the OG soccer streaming services out there. It still has an elite product, providing English- and Spanish-language broadcasts for many leagues, including the top five European leagues, Major League Soccer, and Liga MX. Simply put, FuboTV gets the games that really matter. (Here’s the complete FuboTV channels list.)

What we all really want is to not have to change the HDMI after your game is over to seamlessly switch to a game of FIFA ’19, and Playstation Vue knows it. There are four different packages, but with the inclusion of FS2, most Premier League and Bundesliga games can be easily accessed with the entry-level Access package. (Here are all of PlayStation Vue channels.)

YouTube TV has a host of popular channels on which you can watch the Premier League but it also has something unique to American soccer. Orlando City Soccer Club, Seattle Sounders Football Club, and Los Angeles F.C. all now have their own channel to produce content outside of the traditional sports media. (You can find the full list of YouTube TV channels here.)

If you have a subscription to any of the services above, you’ll want to make time for the corresponding NBC Sports app to watch games on the go. It’s sleek and efficient, and it works with regional NBC Sports channels, NBCSN, and the Golf Channel.

New to cord-cutting? Here are our picks for the best movie streaming sites of 2018 and free live TV apps and channels. If you’re looking for a specific channel, here’s how to watch HBO, Showtime, Starz, ESPN and ESPN2, AMC, FX, Fox News, MSNBC, CNN, FS1, TBS, TNT, Cartoon Network/Adult Swim, the CW, NBA TV, MTV, the Weather Channel, and NFL RedZone without cable, as well as free movies on YouTube. If you’re on the move, here’s how to watch Fox Sports Go and live stream NBC Sports.