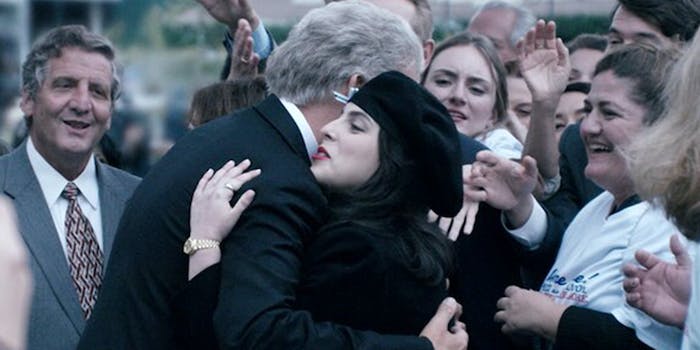 A blue stain shakes the nation.

Ah, the 1990s. Generation X ruled the era and made superstars out of Sonic the Hedgehog, Jerry Seinfeld, and a saxophone playing Arkansas governor turned president, William Jefferson Clinton. His first election in 1992 was a little too close for comfort, but after practically sweeping in 1996, America was head over heels with Bill. That was until 1998, when a presidential scandal shook the country, and in fact, the world. American Crime Story: Impeachment recounts this once-in-a-generation scandal.

Of course, Bill, Hillary, and Monica Lewinsky will appear. But Impeachment is going to get into every single nitty-gritty detail. Linda Tripp. Ann Coulter. Paul Begala. Even Matt Drudge and his dumb hat will feature in this season-long conspiracy. Like The Trial of O.J. Simpson and The Assassination of Gianni Versace, American Crime Story will offer new, captivating insights into the affair that nearly brought down a presidency.

Here’s everything you need to know to watch American Crime Story: Impeachment.

American Crime Story: Impeachment is available to stream on FX. The easiest way to stream FX programming is Hulu, which airs new episodes of their shows on Hulu the day after they air. The most popular option is the basic Hulu on-demand plan, where you can watch the show for free when you sign up to try their ad-free service for 30 days.