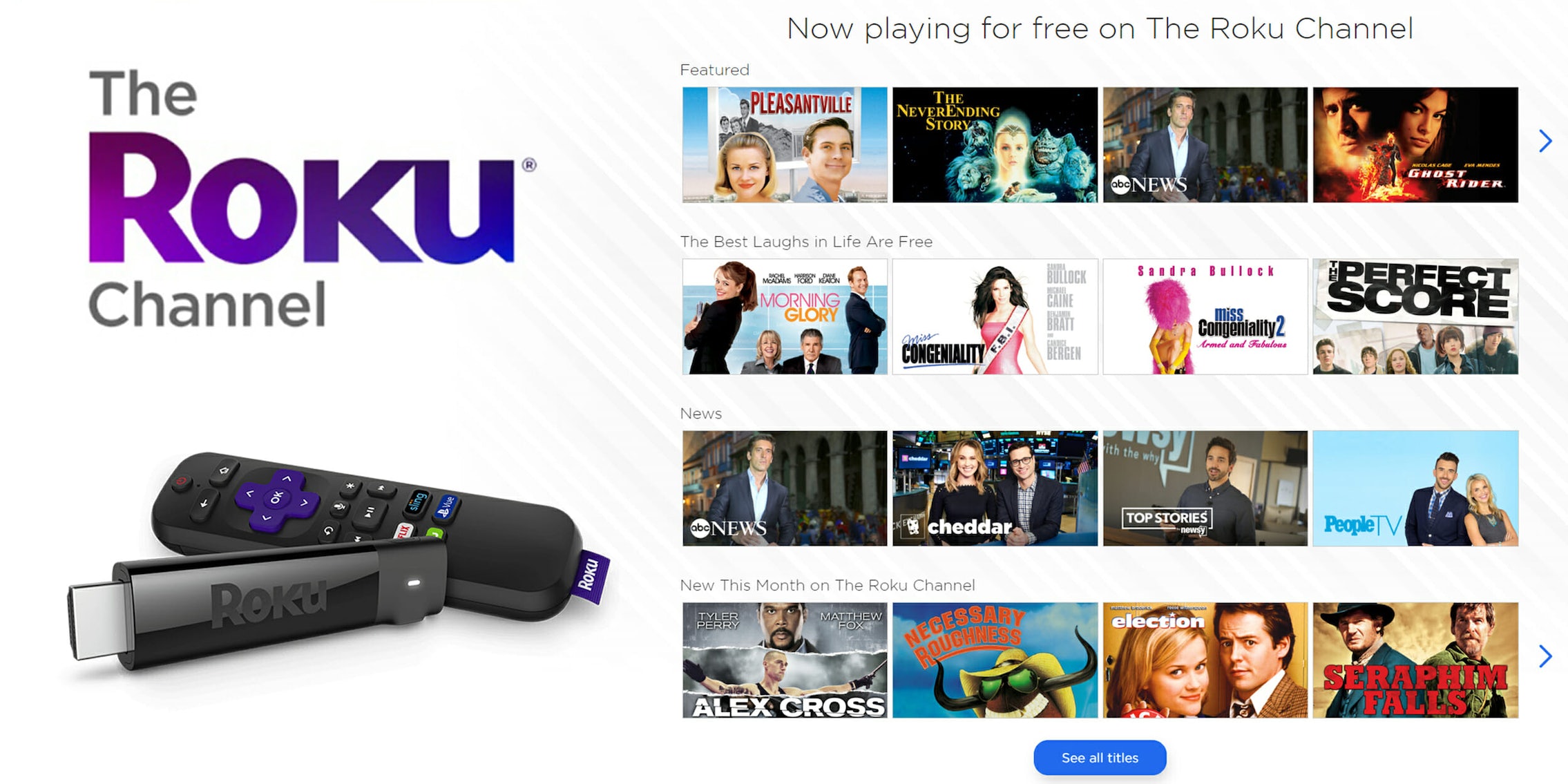 The 25 best free Roku channels for movies and TV shows

Some of the best things on Roku are free.

Thanks to Roku’s free channels, cordcutters never need to spend a dime for great TV. Roku is overflowing with thousands of channels that offer incredible free movies, TV shows, and original programming.

Of course, the downside of such an ecosystem is the supercilious amount of fluff. Some channels look cool but offer nothing of real value. We’ve done the hard part, finding the best free channels on Roku, whether you’re looking for news, entertainment, or something for the kids to watch.

To access free Roku TV channels and movies, you must first purchase a Roku device. (If you came to this page because you already own a Roku, congratulations! You can now stream for free.)

The cost of a Roku device starts at $30 and unlike other streaming services that charge monthly subscription fees, that is a one-time purchase. Of course, there are options to add on additional content, but we’re guessing you want to know about the free Roku channels, so let’s get to it.

What are the best free channels on Roku?

Tubi TV has taken Crackle’s crown as the best free service on Roku, with a massive library of over 7,400 TV shows and movies available for free streaming. This ad-supported network doesn’t have original content, instead focusing on its vast library of movies and series.

Anime fans, in particular, should take note of Tubi’s incredible collection, but there’s truly a little something for everyone. While many services drown in old movies, Tubi puts award-winning films and series in your reach. If there were an ad-free option, we’d subscribe.

Crunchyroll is one of the leading anime streaming services in America, thanks in part to its free options. While paying customers can watch ad-free HD streams, free users can stream the entire catalog in standard definition with limited ads.

Catch up on One Piece, Naruto, Overlord, Hunter x Hunter, and hundreds of other shows without spending a dime. Though with subscriptions costing just $6.99 per month, we recommend subscribing if you’re a fan.

Or join the previously mentioned VRV to bundle the service. (Here are our picks for the best anime on Crunchyroll.)

One of the best Roku TV channels, Sky News is a 24/7 news network offering coverage from the U.K. and the rest of the world. Its award-winning programming provides a way for free Roku users to keep up with the news without access to a cable streaming program.

The channel’s commitment to nonpartisan coverage may frustrate more ideological viewers, but for everyone else, it’s a beautiful solution. Besides, we could all use less politicized news.

The downside of living on a budget as a parent is knowing you might be missing out on valuable content for your kid. That’s why PBS Kids’ approach to streaming is so remarkable. Family’s get a free 24/7 feed on its app without a subscription or login required. No catches.

Can’t get PBS over the air? The Public Broadcasting Station has the same commitment to sharing its focused adult content as it does its children shows. Enjoy your favorite PBS shows like Frontline, NOVA, and Masterpiece Theater free in beautiful streaming quality.

The free Roku channel includes thousands of videos for you to browse; the only limit is how much time you have to watch.

To fully unlock Cartoon Network’s library you’re going to need a cable subscription, but there’s plenty of content to watch for free as well. Download the free Roku channel and look for the “Unlocked” section of the site.

Here you’ll find all of the episodes available for streaming, including a host of Regular Show, Teen Titans, Adventure Time, and all your other favorite Cartoon Network shows. It may not be the complete package, but when you’re streaming on a budget, it’s enough.

Sony’s Crackle is an ad-supported service that features plenty of big Hollywood blockbusters and excellent TV series. Along with classics like Talladega Nights and The Karate Kid, Crackle has started to dip its toes into original programming.

Its series The Oath, Start Up, Snatch, and Hook’d are surprisingly entertaining slices of TV, arguably worth a spot on AM in another universe. The ads can sometimes be a little much, but for free programming, it’s a steal.

Sports fans with Roku don’t have a ton of free options, but thankfully their main one is great. CBS Sports’ app is a godsend for budget minded sports watchers. You get live 24/7 streaming sports news, including highlights and betting advice.

But wait, there’s more. It also includes pregame and postgame coverage of all CBS sports events and dedicated coverage of every major league. They even cover the drafts.

If you have a TV package you can login for more features, but even on the free level CBS Sports rules.

Of all the Roku TV channels, Nosey is the home for daytime trash entertainment. Collecting classic episodes of series like Jerry Springer, Cheaters, Paternity Court, and Maury, Nosey offers a buffet of chaos to help you feel better about your own life.

Sure, it’s garbage, but it’s incredibly interesting garbage and a lovely throwback to daytime channel surfing of yore. It’s like a little vintage Bravo, waiting just for you.

You might be surprised to learn that Roku has gotten into the streaming game itself, offering a mix of news and movies for free to all users. Drawing news from ABC and along with big name movies, the Roku Channel is similar to other free channels on Roku.

However, it runs better than almost any other streaming service on the device, in part because it’s made by the same people. When every other service fails you, The Roku Channel is there with the goods.  There’s even free 4K content.

Al Jazeera is a world-respected news agency, and as long as you aren’t looking for American neoconservative voices, it’s a solid option for daily information.

There may not be a free MTV station for music lovers among Roku TV channels, but NPR’s Tiny Desk Concerts makes up for it. Each week Tiny Desk Concerts provides some of the world’s best stripped-down live music anywhere for free.

What makes Tiny Desk Concerts so special is the variety. One week you’ll find Erykah Badu’s soulful funk then the next Australian indie wonders Camp Cope, followed by T.I. or Taylor Swift. Blurring the lines between pop, rock, hip-hop, and country, Tiny Desk Concerts is a music lovers dream.

Winner of Apple TV’s App of the Year in 2017, ChefsFeed makes its way to Roku just in time for your next meal. This free cooking channel dishes up a mix of documentaries and culinary tips, satiating the hunger in your stomach left by missing Food Network.

America’s best beginners’ cookbook has the most useful cooking channel on Roku, and it won’t cost you anything. Featuring episodes of America’s Test Kitchen, viewers watch a team of test cook workshop everyday recipes.

What’s the best way to roast chicken? Ever wanted to make a ragu? They have you covered. Viewers also get treated to America’s Test Kitchen’s useful helper videos on best practices in the kitchen. If you want to learn how to cook, download this Roku free channel today.

Genre fans must immediately stop what they’re doing and download the Shout Factory TV app for Roku. This channel being free is a true mystery, with a catalog overflowing with classic horror, sci-fi, and genre entries.

And that’s just the free movies. The TV section has beloved lost sitcoms and, most importantly, subtitled episodes of all the original Super Sentai series. This is the show American studios turned into the Power Rangers in the USA.

Trust us that the original is somehow even wackier, yet oddly more adult. Sci-fi, horror, and classic TV fans trust us. You’ll never be bored with Shout Factory TV.

The service isn’t supported by all libraries, but our tests using the Los Angeles and Chattanooga Tennessee public libraries have been incredible.

We suggest saving a few credits each month for audiobooks, but when you’re looking for British TV or a movie to stream, Hoopla is a nice added bonus from the library.

It’s easy to make fun of, but BuzzFeed creates some of the best viral video content online. Worth It is an often hysterical look at excess, while the Unsolved series offers strong short-form paranormal and true crime stories.

With tons original series, most with a few seasons to check out, the BuzzFeed channel is an unexpected must-add for free Roku channels.

Viewster is a service on the come up. Its live action section is largely terrible Z-horror films, but viewers who are interested in anime should make a point to check out the site.

What it lacks in modern live-action films they make up for with important classic anime like Fist of the North Star, Jin-Roh: The Wolf Brigade, and Lily C.A.T. While it’s live-action section has a long way to grow, Viewster is a useful free anime source.

Comet TV is a free top shelf sci-fi streaming TV station, offering a schedule of classic TV (Dead Like Me) and movies (The Brain that Wouldn’t Die). It’s like having the SyFy channel in your home, only if it was still called Sci-Fi and showed great old TV shows during the day.

At first glance, you might expect Popcorn Flix to be just another app for B- and C-grade crap. However, closer examination shows unexpected treasures like Secretary and John Ford’s Stagecoach.

Thanks to a deal with Shout! Factory TV, Popcornflix also has a shockingly good horror section. If you’re willing to explore, there is plenty to love here, just expect to pass through a lot of modern John Cusack films you’ve never heard of to find them.

Pluto TV is a free internet TV service with 100,000-plus hours of content. Once you start to dig around, there’s actually plenty to discover on Pluto TV. And it’s easier than you might think.

Beyond the price, Pluto’s best feature is how familiar it is. Utilizing cable’s familiar grid-style channel guide makes it easy for new users to jump right into Pluto TV. Pluto TV divides its content into blocks of channels.

Those are organized by categories, including Movies, Entertainment, News, Binge Watch, Comedy, Sports, Explore, Life + Style, Tech + Geek, Kids, Latino, Music, and a block of Featured channels that leads the grid. These blocks are mostly made of great channels you’ve never heard of.

This free streaming app features more than 10,000 movies from 25 genres. Its selection boasts work from greats like Anthony Hopkins and Michel Gondry. It’s a rando-centric bundle of indie movies sorted by genre—you’ll likely find something watchable.

New to cord-cutting? Here are our picks for the best movie streaming sites and free live TV apps and channels. If you’re looking for a specific channel, here’s how to watch HBO, Showtime, Starz, ESPN, AMC, FX, Fox News, MSNBC, and NFL RedZone without cable, as well as free movies on YouTube.