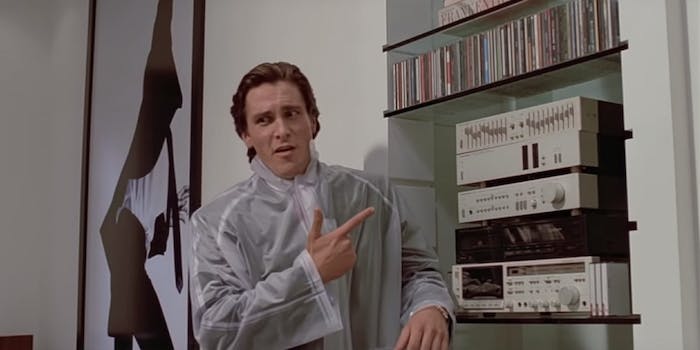 The 20 best serial killer movies of all time

These serial killer movies will keep you up at night (and probably during the day, too).

The human condition, and how evil can manifest in anyone, is the central thread in a good movie about bad people. Here are our picks for some of the best serial killer movies, which will likely have you questioning the motives and stability of everyone around you—yourself included. (We’ve noted where the movies are streaming, when applicable.)

Zodiac is the great crime movie of our time. David Fincher’s masterpiece about the hunt for the notorious Bay Area killer is not only his best film—it’s perhaps the best film ever made on the nature of obsession. Dark, enigmatic, and unforgettable, this is the kind of movie that gets better with each viewing. Finally receiving some of the recognition it deserves as one of the best films of the past decade, if you’ve only seen Zodiac once, the time to revisit it is now. And if you’ve never seen it, the same holds true. —Chris Osterndorf

Mary Harron’s film adaptation of Bret Easton Ellis’ controversial 1991 book leaves out some of the more graphic and gruesome passages but leaves in the narcissistic flourishes and toxic masculinity of late-’80s New York City. Christian Bale is pitch-perfect as Patrick Bateman, a Wall Street banker who indulges his murderous fantasies, and Reagan-era materialism is on full display. (The business card scene never gets old.) That Bale went on to be Batman and co-star Jared Leto became the Joker only makes the film more amazing and perverse. —Audra Schroeder

This South Korean thriller pits two of the country’s most well-known actors (Choi Min-sik and Lee Byung-hun) as a serial killer and a cop, respectively. It’s a cat-and-mouse story, or maybe cat-and-cat is more appropriate, as Byung-hun relentlessly tracks and tortures the man (Min-sik) who killed his wife. The film is directed by maestro Kim Jee-woon, so you’re in good hands. I Saw the Devil is brutal and provocative, and if you have the stomach for it, it’s well worth a watch. —Eddie Strait

Though not quite as flawless as David Fincher’s true-crime masterpiece Zodiac, Se7en is still a major work in the thriller genre from the closest thing this generation has to Hitchcock. The script, from Andrew Kevin Walker, is a perfect execution of a brilliant premise. As Brad Pitt and Morgan Freeman attempt to track a killer who’s selecting his victims based on the seven deadly sins, Fincher tightens the screws more and more, before everything explodes in the movie’s unforgettable climax. —Chris Osterndorf

5) The Silence of the Lambs

Calling The Silence of the Lambs a horror film may be tough, but how many suspense films feature crucifixion, cannibalism, and skin suits? The misconception that this isn’t a horror film is part of what helps make it so terrifying—viewers come in with basic expectations and end up surrounded by unspeakable evils. While much has been written about Anthony Hopkins’ Hannibal Lecter, the real joy of the film is Ted Levine’s Buffalo Bill. Whether driving home the importance of lotion or dancing to new wave, each of his scenes helps build a sense of dread that will stick with you long after you’ve run out of Chianti. —John-Michael Bond

Hush is an hour-long cuticle-ripper. The 2016 film follows Maddie (screenplay co-writer Kate Siegel), a deaf and mute author living in a secluded cabin in the woods. And there’s a killer on the loose, wearing a creepy white mask. This premise might sound awfully well-tread, but Hush upends the typical home-invasion thriller by letting us see the threat (The Newsroom’s John Gallagher Jr.) unmasked, forcing the tension to build as Maddie finds different ways to thwart his murderous advances. By immersing us in Maddie’s silent world, the tension is even more palpable, and the fact that she’s a writer of fiction allows the film to expand in some inventive directions, even as her fate remains unsure. —Audra Schroeder

Tobe Hooper’s 1974 film is studied at universities now, but when it was released it was truly shocking. The story of a psychotic family and their house of horrors, and the group of teens who happen upon them—most notably the iconic Leatherface—has been retold several times over the decades, but the original still has the look and feel of a true horror classic. —Audra Schroeder

8) Henry: Portrait of a Serial Killer

Henry: Portrait of a Serial Killer was so controversial that, although originally released in 1986, it didn’t see a wide release until 1990 due to the MPAA giving it an X rating. That’s right: This film has been labeled pornographic by the MPAA simply for its soul-crushing violence. Henry is a drifter, moving from place to place and committing murders as he goes. Women, men, children—all fall at Henry’s evil hands. Until, that is, he meets up with his old friend Otis and Otis’ sister Becky. As the old friends start a wave of violence together, Henry builds a relationship with Becky that has consequences for everyone involved. While shocking, the violence is relatively tame by today’s standards, but Henry: Portrait of a Serial Killer has lost none of its terrifying impacts. Michael Rooker (Guardians of the Galaxy) gives evil a face as Henry, and it’s one you won’t quickly forget. —John-Michael Bond

The original Hannibal Lecter movie, Michael Mann’s 1986 thriller takes Thomas Harris’ 1981 novel Red Dragon and bathes it in blue. Mann, who was coming off Miami Vice, stylized the adaptation, giving the story of FBI profiler Will Graham and serial killer Thomas Dolarhyde a glacial, dreamy quality. As the two men hunt each other, a narrative structure for Mann’s future films (Heat, The Insider) comes into focus. —Audra Schroeder

We meet killer Anton Chigurh within the first two minutes of No Country For Old Men, the Coen brothers’ adaptation of Cormac McCarthy’s 2005 novel. The first murder we witness sets off a domino effect across West Texas, as dirty money, small-town law enforcement, and a dead-eyed killer engage in a deadly dance. —Audra Schroeder

This film takes the oversaturated found footage genre and adds a little improvisation. An aspiring videographer named Aaron (Patrick Brice, who also directs) answers an ad to film a man named Josef (Mark Duplass), who lives in a remote house in the woods and says he’s dying of cancer. Josef seems like a normal, affable guy, but then he puts on a wolf mask and a series of manipulations begins. If you’re not a fan of the jump-scare, this film will be pretty unnerving; however, it’s employed so much it almost becomes comical. As we see at the end, Aaron wasn’t the first to answer Josef’s call. (See also: Creep 2.) —Audra Schroeder

12) The Girl With the Dragon Tattoo

By the time the American version of The Girl With the Dragon Tattoo was released into theaters in 2011, Sweden had already adapted the entire Millennium trilogy to film (currently streaming as a six-episode season). The original is the superior, as Michael Nyqvist and Noomi Rapace portray a suspenseful and thrilling ride that’s every bit as dark as the book itself. —Michelle Jaworski

David Robert Mitchell’s 2014 film plays on an idea that could have unending sequels: A curse is transmitted through sexual intercourse, and once you have it, the curse follows you until you pass it on to someone else. In It Follows, a young girl named Jay (Maika Monroe) discovers this terrible premise and starts to investigate what exactly “It” is. The cinematography allows for scenes to feel at once innocent and suffocating, and the minor-key soundtrack adds a layer of dread. —Audra Schroeder

This movie angers and fascinates me in equal measure. So, basically, it’s a quintessential Michael Haneke experience. Haneke filmed a shot-for-shot English version of his 1997 Austrian film about a family who is terrorized in their home by two fresh-faced yuppies. The film indulges in much of the violence it is critiquing, culminating in a masterful moment where the audience’s bloodlust is reversed in a way that you won’t forget once you see it. When I first saw Funny Games I hated it, but I’ve spent so much time thinking about in the decade since that Haneke has won me over. He makes movies that you can’t dismiss, and he’s one of world cinema’s most enigmatic voices. —Eddie Strait

Based on the story of Australia’s worst serial killer, The Snowtown Murders is not for the faint of heart. Before director Justin Kurzel directed his arty version of Macbeth, or his less-than-stellar video game adaptation of Assassin’s Creed, he began his career with just about the darkest, most violent first impression you could make as a filmmaker. The result is fascinating, especially if you’re a true crime fan. The Snowtown Murders is the kind of horror film that is truly horrifying, and not in a fun way. —Chris Osterndorf

Before Wonder Woman, director Patty Jenkins tackled another complicated personality: serial killer Aileen Wuornos. In this fictionalized account of her life, she’s played by Charlize Theron, who went deep undercover to more accurately resemble Wuornos, a sex worker who killed seven men across the state of Florida in the late ‘80s. Theron inhabits her, and the film unravels around her powerful performance. —Audra Schroeder

This 1993 Belgian film was ahead of its time as a mockumentary of serial killers. What happens when a film crew follows an alleged killer as he goes about his daily routine? You get a lot of questions about how complicit these bystanders are in their quest for content, and how the existence of an audience changes how the killer acts. And then the camera turns on the viewer. —Audra Schroeder

If you got hooked on Netflix series Dark, this 2010 title from creator Baran bo Odar is good supplemental material. More than 20 years after a young girl disappeared, a small town weathers another disappearance, and it dredges up old memories that set subplots in motion. It’s a crime procedural at its core, but it also explores where and how evil lives in everyone. —Audra Schroeder

Puberty isn’t kind to anyone, but Dawn is experiencing a particularly traumatic awakening. She has a second set of teeth, one that makes sexual contact a life-threatening possibility. This nuclear-powered tale of mutant genitalia and teenage angst was a cult hit upon its release in 2007, but this feminist horror treat is due for rediscovery. Teeth takes a B-movie premise and delivers a body horror masterpiece. —John-Michael Bond

John Waters and Kathleen Turner collide in this 1994 comedy, which sees Turner playing suburban housewife-turned-killer Beverly. The film’s distributors reportedly had issues with some of the depictions in the film—it is John Waters, after all—but it’s become a cult favorite for its over-the-top satire of serial killers and domestic life. —Audra Schroeder