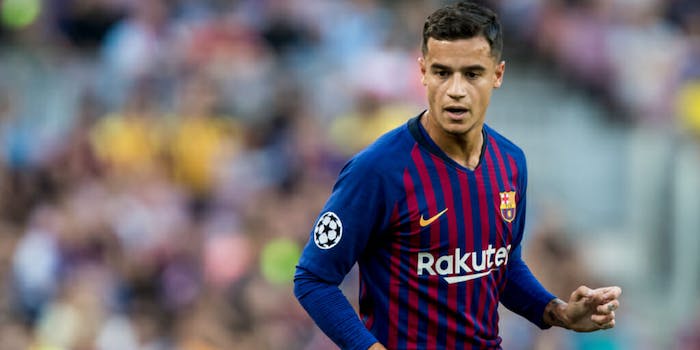 How to watch Atletico Madrid vs. Barcelona online for free

As the FIFA international break mercifully comes to a close, Europe’s top clubs are preparing for the final push through the holiday season, and we kick off Saturday with a big one. Watch Atletico Madrid vs. Barcelona online to see if Antoine Griezmann and Atletico can move into first place with a win, or if Lionel Messi and co. stay on top. With Real Madrid slacking in sixth place, this game will go a long way to determine who wins La Liga in 2018-19. Here’s everything you need to catch the Atletico Madrid vs. Barcelona live stream.

Atletico Madrid vs. Barcelona live stream: How to watch for free

Atletico Madrid vs. Barcelona: Why it matters

Death, taxes, and Atletico Madrid clean sheets. This team has been the same for nearly 10 years, and Diego Simeone’s squad isn’t changing. Atletico is happy defending the whole game and beating you 1-0, and its 2013-14 La Liga title is the proof in the pudding. Add in new summer signings Gelson Martins and Thomas Lemar, and Atletico looks ready to challenge for both the Champions League and La Liga.

Barcelona hasn’t had any problems so far this season, as the club has taken care of business both in Spain and Europe. While the team may not be as fun to watch under manager Ernesto Valverde, it now has a good combination of ball movement and solidity on defense. The tiki-taka play will always live on at the Camp Nou, but Valverde’s 4-4-2 formation allows the team to settle back into its shape and defend in a way that Barcelona teams are not known for. Don’t look now, but Valverde is bringing more defensive-oriented, Mourinho-like soccer into Pep Guardiola’s house of offense, and it just might bring them another Champions League.

Here, the only thing up for grabs is the three points. This one is a test, not a quiz. These teams know exactly how they are going to play. Both teams can afford a loss at this point, as neither will be derailed in La Liga or UCL after just one game. But it’s a statement game, to tell the rest of Europe that this is their year. Tactically, we know that even at home Atletico will sit back and try to get a goal on the counter-attack. Barcelona loves nothing more than the bulk of possession, so both teams will be in their element. I like an incomplete: Atletico 2-2 Barcelona.