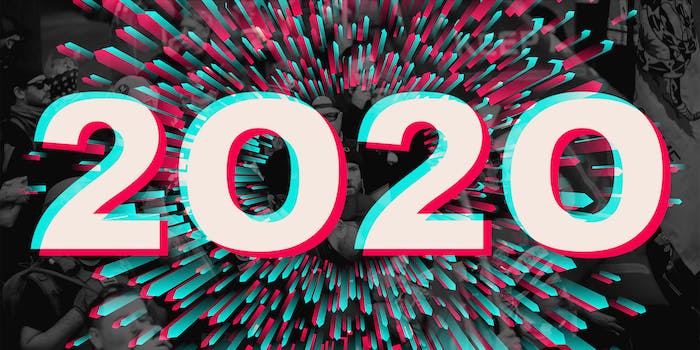 TikTok offered a POV for a cursed year

The most popular TikTok of 2020 is a young woman (Bella Poarch) barely moving her face. It spells out the app’s utility: You can go big by doing very little.

And yet, TikTok felt different this year—when many of us were forced to do very little thanks to an uncontrolled pandemic. The foundational challenges and dances were still visible: There was the Renegade, and Megan Thee Stallion-inspired dances and trends. But the pandemic shifted TikTok into a tool to document: shutdowns, protests, remote learning, the election. POV videos are an integral part of the experience, but this year TikTok was the POV.

It beat out Facebook for most downloaded app of 2020, which means people spent even more time scrolling. It’s the only app that I really wanted to look at this year, that didn’t fill me with dread, even when “Karen” videos inevitably showed up on my FYP and made my jaw clench. Twitter is too anxiety-inducing; Instagram too static and curated. TikTok offered a more real-time sense that there was someone out there having the same experience or thoughts.

Nathan Apodaca’s viral skateboarding clip, the second most viewed TikTok of the year, feels more indicative of the vibe in 2020. You didn’t have to be verified (well, initially) to engage with a bigger audience. What “side” of TikTok you’re on became a testament to how niche communities grow on the app, and how they can become more mainstream. Over the summer, an alleged hex on the moon incensed WitchTok, and TikTok time travelers (and astrologers) got at least one thing right: Biden would win the presidency and Trump would refuse to accept it.

It was a great medium for storytelling, especially new takes on early internet tales; DIY designers found a place to create and sustain. It also became a platform for workers to document their conditions: A growing genre shows fast food workers revealing how certain foods are prepared, and former retail and corporate workers have been spilling industry secrets. In October, a Lubbock, Texas, Walmart employee quit over the store’s loudspeaker, calling out its racist, harassing employees by name.

Politics dominated the year, and TikTok captured that POV, too: As protests took place across the country, teens documented political awakenings and used TikTok to participate in virtual actions, like experimenting with attendance numbers for Trump’s Tulsa rally in June. Trump responded with a TikTok ban shortly thereafter, citing national security concerns. But given the administration seems to have abandoned the cause in favor of trying to steal the election, could it be that the ban was for the security of Trump’s ego more than anything else? Gen Z even had a more direct line to the administration, in the chaotic TikToks of Claudia Conway. In the lead up to the election, teens and young adults found new ways to engage, as in-person organizing and voter registration became too risky.

TikTok had its own issues with censorship and suppression of content, and it attempted to be more transparent about what users see and don’t see. I understand TikTok is analyzing me like every other app and is trying to sell me things. But some of the best art made this year was on TikTok: The app did a lot.