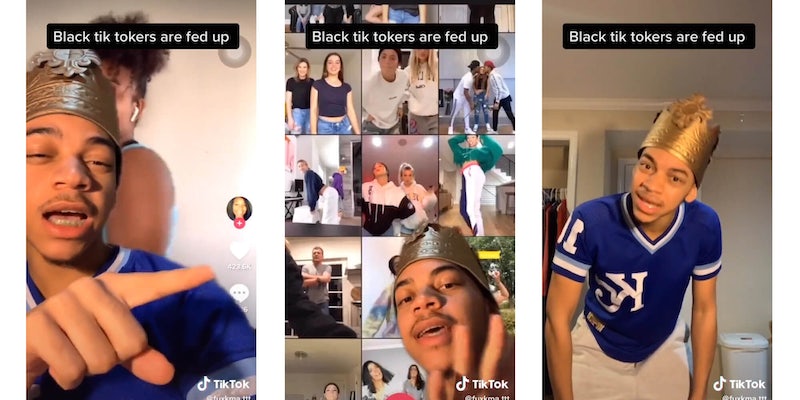 Black creators call out TikTok’s discriminatory ‘For You’ page

'Not one 'at' to this girl, no dance credits, nothing.'

Black TikTok creators are fed up with the app’s discriminatory “for you page.” TikTok user @fuxkma.tt is gaining attention for using the hashtag #blackcreatorsfedup to draw attention to Black creators who aren’t getting recognition for their original work.

While Black TikTok creators often create popular sounds and dances that go viral, white TikTokers tend to get many more views and likes when they copy the work of others. And Black creators often don’t get credit for their work.

One of @fuxkma.tt’s more popular #blackcreatorsfedup videos talks about Keara Wilson, who created the “Savage” dance. He points out that the sound page only shows white TikTokers at the top, all above Wilson, the original creator.

“Not one ‘at’ to this girl, no dance credits, nothing,” @fuxkma.tt said. “Y’all just took her shit, ran with it, got y’all views, got y’all money… always stealing.”

Other Black creators agreed with @fuxkma.tt and are using the hashtag #blackcreatorsfedup to voice their frustrations.

“I want to see some melanin,” user @astoldbydom said. “I don’t see nobody of color until I go to the bottom of the barrel…stop it. Cut it out. Fix it.”

TikTok user @koi.aye used sound from Bring It On, where the Toros cheerleaders from an affluent, mostly white school, infamously stole cheer routines from the Clovers, cheerleaders who were mostly people of color, and passed the routines off as their own.

TikTok started coming under fire for who it promotes on the “For You Page” after the “Renegade” dance blew up. The creator of the dance was 14-year-old Jalaiah Harmon. But like other Black creators, she didn’t receive credit for her work while white TikTokers were gaining popularity performing her routine.

While Harmon did eventually get credit for her stellar routine, not every Black creator can say the same.

But that may start to change. @fuxkma.tt said that after his “Savage” video started getting views and people started using #blackcreatorsfedup, the TikToker who created the “Savage” dance was featured at the top of the sound page.