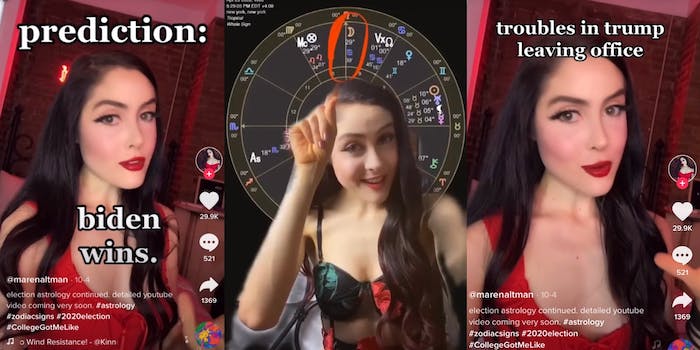 'I think Trump’s going to lose the election, refuse to leave office, and incite massive uprisings.'

The presidential election was a source of anxiety across the country last week. Election predictions and insights abounded on social media, with many pulling from statistical data and polling data from news sites such as FiveThirtyEight and the Economist to guide insights about who the next president might be.

But TikToker @marenaltman’s predictions about who would take the highest office in the land weren’t guided by statistical chances and polling simulations. She takes the astrological approach.

Maren Altman’s TikTok page is filled with astrology-related videos ranging from the analysis of zodiac signs to predictions about key themes to expect for the upcoming year. But the astrologer and author’s videos about the presidential elections really took off, garnering hundreds of thousands of views.

Over the past several weeks, Altman uploaded election forecast videos informing viewers about what the astrological alignment of planets could be telling about the course of the electoral race. She also didn’t shy away from making an early prediction. In an early October video that has over 1.6 million views, Altman predicted that Joe Biden would win the election.

“I think Trump’s going to lose the election, refuse to leave office, and incite massive uprisings,” @marenaltman said in a video uploaded on Oct. 14. She added that “Biden’s astrology looks pretty straightforward into authority.”

Altman was flagged by TikTok for sharing “inaccurate information” but told the Daily Dot last week that she makes predictions, not “clear claims.”

Still, several weeks after the video, Altman’s predictions held out to be relatively true when President-elect Joe Biden carried enough electoral votes to defeat incumbent Republican candidate President Donald Trump. Altman also accurately predicted the timing in the outcome, stating in a video uploaded Friday that the official electoral outcome would come late that night or early the next morning.

Since the official calling of the race, Trump has repeatedly refused to concede, pushing for litigation on election fraud allegations. In addition, the white supremacist group Proud Boys stirred up national attention Saturday when its leader said that a “standby order has been rescinded” for the group and called on members to take action, the nature of which was never explicit.

Altman made a video clarifying the statement she made about “massive uprisings,” claiming that she doesn’t foresee “flat out civil war” but that Trump would green-light his supporters to “incite violence” and contest the election. Altman uses astrology to back up her statement, explaining that the post-election alignment represents “a slow movement from lack of clarity into slowing figuring out the result.”

In the days following the election, Altman’s prediction videos garnered attention on other social media platforms. Users on Twitter were astonishment that she correctly predicted the election results a month in advance. “I would trust her with my life,” one user tweeted on Thursday.

Her videos did receive some backlash about the premise of astrology, especially from conservative and right-leaning users. In response, Altman made it clear in a video two days prior to Election Day that no astrologer “is ever going to interpret everything correctly” but rather looks at the “symbolism of what is to come.”

“I am not unbiased, I am human, but I have no incentive to make bias predictions,” Altman said.