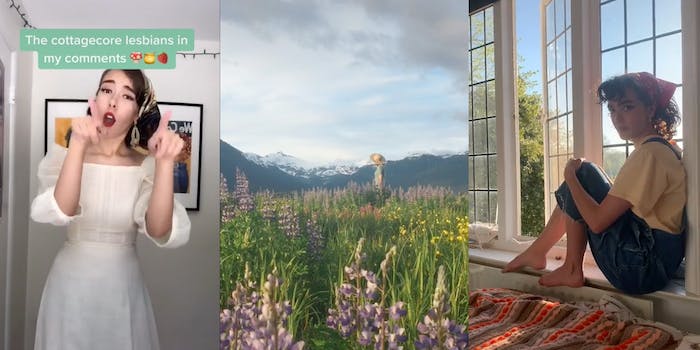 What is cottagecore TikTok?

The subculture was popularized as an aesthetic on Tumblr—and now it's come to TikTok.

Scrolling through cottagecore TikTok is at once calming and strange: There are scenes of lush fruit trees, pressed flowers, and houses with big windows and natural light. It’s aesthetically pleasing. It’s also fantasy-scrolling.

What is cottagecore TikTok?

Cottagecore was popularized as an aesthetic on Tumblr, using pastoral landscapes and naturalistic set pieces to convey a sense of calm and domesticity. A cottagecore subreddit has been around since 2018. There’s a focus on crafting, cooking, gardening. Mushrooms and frogs are totems. But on TikTok, a dizzying platform of aesthetics and identities, cottagecore has become more of a community.

“I’ve seen cottagecore evolve past an aesthetic, and into a framework that Gen Z teens use to develop their own social and political identities,” says Biz Sherbert, a writer who analyzes fashion trends on TikTok. “Cottagecore has a whole set of values that are actually pretty radical and nuanced. A lot of people call cottagecore anti-capitalist, and while it definitely is in some ways, it’s also a lot more intersectional and complex than that.”

While, outwardly, cottagecore might seem a bit like playing house, it serves a more important purpose for the queer community. As noted in a February article for Vice, it’s a way to reclaim historically hetero or domestic spaces, and rural areas where the LGBTQ community hasn’t traditionally been accepted. The term is most often applied to lesbian or “alt” TikTok, a space where it’s less about the popular stars and dances and more about subcultures. Cottagecore also illustrates the many side roads of alt TikTok: A teen raising tadpoles in her backyard could be cottagecore, or an extension of frog TikTok. The TikTok witch community could be cottagecore, but also fairycore or dark academia.

There’s been mainstream attention: In March, cottagecore was featured in the New York Times Style section, where one woman described it as a real-life Animal Crossing, though it has since become popular in Animal Crossing, as well as Minecraft. Recreating Harry Styles’ cardigan became a crafting challenge. “Cottagecore is probably the second Gen Z-dominant, social media-based subculture to ever reach that level of cultural awareness,” says Sherbert. “The first was the e-girl/e-boy subculture.”

But for many people, cottagecore is less about aesthetic and more about relationships—both personal and with nature. There is of course something alluring about the idea of remote and self-sustaining living, especially in the midst of a pandemic, when the supply chain is unstable and evictions and unemployment are up. Growing our own food could become a necessity, but that’s also not something a lot of Americans are physically or financially equipped for. Still, there are people educating about ways to utilize land and self more efficiently.

Cottagecore is more of a fantasy of what self-sufficiency could look like. It’s also a very white space, which has sparked debate around recognizing privilege and the history of colonialism in relation to getting “back to nature.” There’s been an effort to correct the idea that cottagecore is only for white women. Paula Sutton, who documents life at her picturesque British enclave Hill House, became popular on Instagram for her eye for interior design and fashion. She also apparently made a white writer publicly quit Instagram, ostensibly because a Black woman living that kind of joyful countryside existence didn’t square with her worldview.

Perhaps one of the more tangible ideas that’s evolved out of cottagecore is that it’s good for mental health and that young people are looking to get away from the noise and negativity of online spaces.

“I think Gen Z has a deeper understanding of how destructive and unhealthy being online all the time is than they get credit for,” Sherbert says. She points out that the subculture encourages activities that “require mindfulness.” Of course, cottagecore still exists if it’s not documented, but it needs its medium: “As much as cottagecore encourages offline living, it was born online and it still lives there.”